Have you ever wanted to own a race car? Well you can, but it usually takes a lot of time and money to turn a regular street car into a serious track campaigner. But there is an alternative to all that work and expense, the 2008 Honda S2000 CR. Now CR stands for “club racer” and as its name implies, it’s about as close as you can get to a real race car without a team, a sponsor, and a winning lottery ticket.

Designed to bring younger buyers into the S2000 fold, the limited-edition CR is described by Honda as “a vehicle built by enthusiasts for enthusiasts.”

To that end, all 1,500 CRs that will enter the U.S. this year receive a very select set of improvements, all aimed at making the CR a top notch track day tool.

The most obvious changes are aerodynamic, with the CR wearing a plow-like chin spoiler to reduce lift, and a large trunk-mounted wing that produces a significant increase in rear downforce.

Under the twin cowl tonneau cover is not a convertible top, but a rear body brace. This both increases chassis stiffness, and saves weight. 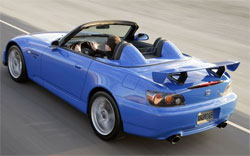 The only protection from the elements is provided by a removable aluminum hardtop; so you had better check the weather report carefully before a long open air drive.

All this controls the movement of 17-inch alloy wheels, wearing aggressive performance tires with 215/45s up front, and fatter 255/40s in the rear.

The power to spin those wheels comes from the S2000’s high revving 2.2-liter dual-cam four-cylinder with VTEC variable valve timing. Power is unchanged at 237 horsepower and 162 pound-feet of torque.

According to Honda engineers, the 2.2 engine is maxed out under current emission regulations, so we expect to see an all-new, more powerful engine soon.

Maxed out or not, the 2.2 will still push the CR to 60 in 6.3 seconds, and through the quarter-mile in 14.7 seconds at 98 miles-per-hour. That’s almost identical to the last S2000 that we tested, but still nothing to sneeze at, and with the CR’s short-throw shifter added to the 6-speed manual, it’s now easier to get through the gears in a hurry - which really helped our drivers get around Savannah’s Roebling Road Raceway, in the shortest possible time.

Whether it’s on long fast sweepers or tight decreasing radius bends, the CR displays superb balance and lightning quick reflexes. There’s not only less front end push and body roll than in a standard S2000, there’s also a lot more grip. The CR also delivers a big boost in feedback from both ends, and sharper corner entry, with a quicker steering ratio and stiffened rack.

As with previous S2000s, the free-spinning engine makes its best power above 6,000 rpm. Keep the engine on the boil, and the CR delivers instant snap with every push of the pedal. Brakes, the same as stock, held up well as well. 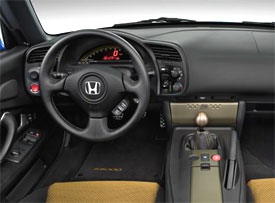 The overall feel is of a well prepared club-level race car. Not a pure competition machine, but much more track-worthy than the standard S2000, and most other street legal performance cars.

But like most real race cars, it’s a bit stiff for daily driving. The ride is harsh over bumps and potholes, and reducing sound insulation to save weight means a big increase in noise from both drivetrain, and the road.

So while we highly recommend the S2000 CR as a superb weekend toy or track tool, we’re not quite as enthusiastic about using it as a daily driver or commuter.

Wherever you drive one, the CR holds you in place with supportive sport seats clad in black cloth upholstery with yellow stitching.

Both the audio system and air conditioning system have been deleted to save weight, but both are available as factory-installed options and can be added to the 2008 Honda S2000 Club Racer’s base price of $36,935. That’s only two grand more than the standard S2000, a whole lot less than it would cost to get any stock car this ready for a race track. Add in a roll cage, and fire suppression system and you’ve got the basics to take on all comers and corners.