Over the last few years, Mercedes-Benz has expanded AMG über-performance to virtually every passenger vehicle they make. But, that loss of exclusivity, along with a flood of rivals, has left their best-heeled customers wanting for performance truly rare. Now their response is the CLK63 AMG Black Series. But as ferocious as it may appear, can it live up to its image, or is it just black magic?

How often does a car as unique and exciting as the 2008 Mercedes-Benz CLK63 AMG Black Series come along?

As close to a pure racing machine as a street-legal car can get, this radical rear-drive AMG coupe hits the road with super-performance icons like Porsche’s GT3 firmly in its crosshairs.

Making its global debut at the 2007 New York Auto Show, the Black Series is modeled after the official safety car of Formula 1 racing, with a little German Touring Car Championship for flavor, and marks the 40th anniversary of AMG tuning. 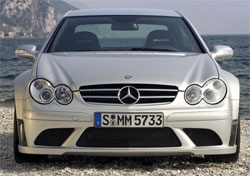 Fired up by a race car style ‘Start’ button, it’s the first engine designed completely by AMG. The 6.2-liter naturally aspirated V-8 ignites 500 horsepower and an asphalt-grinding 465 pound-feet of torque. Built almost entirely from high-strength silicone-aluminum alloy, it shares no parts with other Benz V-8s.

This powerplant screams through a full-length twin exhaust, and it’s managed by a 7-speed automatic transmission, with both manual and sport driving programs, and steering wheel-mounted shift paddles.

These will rocket the Black Series to 60 in only 4.1 seconds and allow it to hammer out low 12-second quarter-mile runs. But keep a tight hold on the tiller, because the rear tires easily light up under full power.

And what power it is; a massive rush of torque from launch to redline, with a thrilling race car roar from the quad exhaust outlets. The 7-speed box snaps sharply through each shift in both manual and auto modes, with the precise ratios making full use of the engine’s huge output.

But it’s handling that puts the real shine on this three-pointed star car. The fully-adjustable competition suspension is unique to the Black Series and can be tuned for everything from ride height to camber and toe-in.

Furthermore, the wider track chassis is stiffened by additional bracing in the trunk and engine bay, while electronic assistance comes from traction and stability controls tuned for the track.

All of which gives the Black Series a balanced but edgy feel. Turn ins are lightning quick. Direction changes have the snap of a real race car, so you have to keep your control inputs smooth. Stay steady on the wheel and throttle however, as it absolutely rockets through corners.

And to clamp down on any reckless abandon, the Black Series is armed with enormous cross-drilled composite brakes with 6-piston calipers. Still, stops averaged 130 feet from 60, but with superb stability: no fade and zero nose dive.

It may be track worthy, but the Black Series delivers the refined street manners and solid, responsive ride that a bare bones competition car cannot.

The outer body is sculpted in bold, dynamic AMG lines. Up front is a large carbon fiber air dam and dual side heat vents.  Muscular wheel flares grant brawn to the wickedly sleek profile, and the equally imposing tail is punctuated with a body hugging carbon fiber spoiler and aerodynamic diffuser. 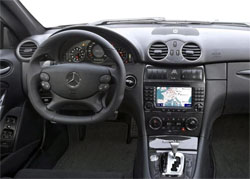 Inside the theme is two-seat performance car. The leather, aluminum, and carbon fiber trimmed cockpit is both purely racy and definitely luxurious.  The dash features a high tech gauge cluster and a compact flat-bottomed steering wheel that underscores the car’s competition heritage.

The super-deep sport seats are wrapped in fine Nappa leather and branded with the AMG logo. You’ll also find expected Mercedes-Benz premium features like deluxe audio and Navigation. But you won’t find a back seat. It’s been deleted to limit weight.

A limited production run will yield only 350 Black Series cars for the U.S, with a near exotic car level $135,775 price tag.

The 2008 Mercedes-Benz CLK63 AMG Black Series is close to the ultimate in no-holds-barred race-style excitement. But it grants all this bravado while still maintaining impressive street-ability; a dichotomy that perhaps only AMG can truly achieve. It’s not black magic; it’s Black Series. A truly rare designation that says this super coupe is absolutely the real deal.