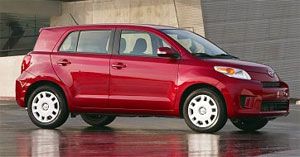 The Scion brand has succeeded at doing what many other brands have failed at, becoming a part of the culture of the youngest, hippest buyers. With all its quirks and charm, and a built-in ability for extreme personalization, scion made small cars cool.

And now, with the brands first revamping well underway, another “x” marks the spot with the all new xD. Let’s see if this broad-bodied hatchback will stir up Scion’s fanatical fans even more.

Things are indeed changing at Scion. Their first lineup overhaul has eliminated the plain-Jane xA and replaced it with the fetching new 2008 xD. And it’s not hard to see where its inspiration comes from. Think of the xD as a smaller box to go with Scion’s iconic bigger box, the xB. And the xD is small, at least on the outside.

In fact the xD’s 5-door box is based on the more organic Toyota Yaris subcompact, sharing the same short 96.9-inch wheelbase. Overall length is only a bit longer at 154.7 inches.

Competing with the likes of the Honda Fit and the VW Rabbit, the xD exudes a more urban-hip flare with its wide stance and stout, sawed-off figure. Its confident shape blends sharp lines, chopped glass and squared body panels.

Scion genetics define the front-end with horizontal headlamps and a rectangular upper and lower grille.  It’s a smart design too, with signals built right into the side mirrors.

In the rear, the xD wears a long, narrow back window, giving it a cloaked, low-key persona.

But not too low key. The roof-lip spoiler, bright exhaust tip, and substantial 16-inch wheels under accentuated fender flairs, do kick it up a notch or two.

Within, the modern cabin combines simple form, and competent function, with ample room for a youngful party of five.

The focal point of the xD’s panel is a high-style speedometer/tach combo that resides within a large radar-like hood. Center stack controls are clean and logically oriented, but again visually with it.

We found the front seats comfortable, if not overly padded, and positioned for optimum visibility. 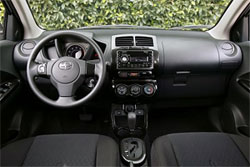 But the main attraction may prove to be the upgraded Pioneer audio system.  In addition to full iPod connectivity, this head unit has the ability to download and display pictures and moving images onto its electroluminescent screen.

The rear seat slides back and forth for flexible people and cargo handling, and it also reclines to five different positions.

And with the 60/40 split seats backs folded flat, there’s 35.7 cubic feet of cargo room, or more than twice that of a typical subcompact sedan.

For front drive power, the xD uses an updated 1.8-liter twin-cam 4-cylinder with variable valve timing.  Output is 128 horsepower - that’s 25 more than the xA - and 125 pound-feet of torque. Trannys are either a 5-speed manual or a 4-speed automatic.

With either, you’ll enjoy the xD’s thriftiness. Government Fuel Economy Ratings for our manual tester were 27 city/33 highway. But in our real world driving loop we did even better, 36.3 miles-per-gallon on regular gas.  The xD has an impressively low Energy Impact Score of 11.8 barrels of oil consumed per year. 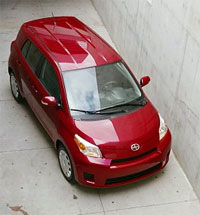 And the xD was not a disappointment on the track either. 0 to 60 in 8.3 seconds, and a quarter-mile in 16.5 seconds at 86 miles-per-hour, are both more than adequate. And it feels even peppier off the line. The engine, however, does tend to be a little buzzy down the stretch. Our manual’s shifts were long, with rubbery throws, but held power well.

Handling is defined by an independent MacPherson strut suspension up front and a solid torsion beam in the rear.

Turn-ins were surprisingly quick, but a fair amount of understeer and body roll dulled the response. We tried to push our tester but it aptly reigned itself in with the xD’s only performance option, namely Vehicle Stability Control with Traction Control. Overall, the xD delivers a capable experience with a good match between power and chassis.

Stopping is governed by ABS with Brake Assist.  Halts were respectable from 60 to 0, averaging 128 feet with no fade, a little nose dive, and for the most part, a nice, solid feel.

Prices are a solid bargain. Base for the very well equipped xD is $15,170 for manual and $15,970 for automatic, and from there, the sky is almost the limit in personalization for the near mono-spec xD with catalogs full of dealer installed and aftermarket accessories available.

Japanese brands have a genius for quickly building on a successful model. The compact xB was a hit, so why not downsize it a bit and called it xD? So now they are two right angled Scions. Perfectly aimed at a youthful, citified culture, that insists on driving cool.