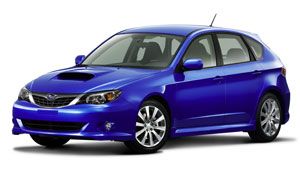 When the Subaru Impreza WRX arrived here for 2002, the intent was to shake up the brand’s staid North American image by capitalizing on their impressive international road rally success. It worked, attracting enthusiastic drivers of all ages. But with success comes rivals, and Subaru knew their WRX had to evolve if it wanted to continue to excel. So, can this new 2008 WRX fend off its contenders and remain ahead?

With competition in the sport-compact class accelerating, we say hello to the all new 2008 Impreza WRX; a fresh version of the rally-inspired compact that has become a mainstream performance standard.

The latest WRX is available in both 4-door sedan and our test car’s 5-door hatch-back body style. It rides on an all-new chassis with a 3.7-inch longer wheelbase, which now stretches to 103.1-inches.

The WRX is clad in more angular, and to many less pleasing, styling than before. Sharp hood creases flank a fully functional air scoop, above a sinister grin of a grille.

There’s a rising character line along the flanks that looks very BMW to us, while at the rear, the roofline plunges over a high-mounted spoiler and down sharply raked rear glass.

The wheels are 17-inch 10-spoke alloys, with standard tire pressure monitoring, all of which are driven by Subaru’s bullet-proof Symmetrical All-Wheel-Drive systems.

And despite its longer chassis, and added equipment, the new WRX can weigh up to 100 pounds less than before. 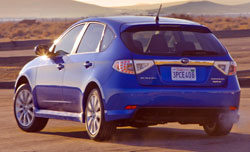 Weight savings are always welcome, since the ‘08 WRX offers none of the power increase we expected. The carryover 2.5-liter turbocharged twin-cam flat-four engine delivers 224 horsepower and 226 pound-feet of torque. But it reaches max power 400 rpm sooner, and max torque 800 rpm sooner.

Also, while most hot cars are moving to 6-speed manual transmission, the new WRX stays with a 5-speed. A 4-speed automatic with manual shift mode is optional.

Not surprisingly, speed runs are also little changed. 60 in 6.0 seconds flat. That’s actually 4/10ths slower than the original WRX. The quarter-mile was also a few tenths back 14.5 seconds at 100 miles-per-hour.

The turbo four still lags at low rpm, but drop the clutch with the revs up, and the WRX leaps off the line.

Handling hardware did receive major changes with a new, more compact, double-wishbone rear suspension and standard VDC stability control. So, as with the original, it’s the handling that impresses us the most about the new WRX.

It responds quickly to rapid steering inputs, with good feel and feedback, and the chassis is even better balanced, with just a bit of all-wheel-drive push near the limit.

VDC stability control is very effective at untangling scary situations, but it also comes on with a bang.

Braking was less impressive. Our car stopped from 60 in a slightly long average distance of 132 feet. The standard ABS felt rather abrupt, unsettling the chassis and occasionally locking a wheel.

Open road driving, on the other hand, was very entertaining, with the drivetrain spinning you down the road in a brisk but more refined manner.

Ride quality is much improved over the previous WRX, as is noise and vibration control.

Government fuel economy ratings for the WRX are 19 city/24 highway. We averaged 22 miles-per-gallon on premium. The government energy impact score is a respectable 16.3 barrels of oil per year. 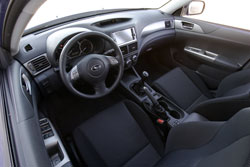 The WRX interior has also received a complete rework. The lines are sleeker, with more curves to the instrument panel, and a more efficient control layout. Gauges reside inside a deep, glare free hood.  The basic equipment catalogue is also more generous. The deep front sport seats now come with side torso airbags, with curtain airbags front and rear.

There are automatic climate controls and a CD sound system which is pre-wired for both XM and Sirius satellite radio. There’s an input jack for MP3 players and portable gaming devices can also be accommodated.

Rear seat room is a few fractions smaller than before, but still fits most adults. The rear seatback splits and folds to open up the generous, thanks to the new suspension, even more usable 19 cubic foot cargo space. Folding the rear seat down does produces a long 60-inch cargo floor.

So, to sum it up, the 2008 Subaru Impreza WRX remains fast and entertaining, but with a major taming evolution in ride and creature comfort.

The edginess of the original has been smoothed, and some of its raw performance civilized. That will affect its appeal to hard core sport-compact purist. But to others, the appeal of the new WRX is now substantially broader.