Just as the Ford Mustang GT offers affordable American V8 muscle, the Subaru WRX STI delivers hot import stimuli with a real world price tag. When we first tested the STI a few years ago, we were knocked out by its over-the-top styling, tough guy character, and road-rally performance. But 2008 brings us a new STI, and at first glance, it looks a bit tamer. So let’s get behind the wheel to find out if the STI is still a blow out.

Few performance cars have established such a formidable reputation as quickly as the Subaru Impreza WRX STI. So naturally, questions will be asked when fans see the switch from sedan to the new 5-door body style.

That’s not to say that the all-new 2008 WRX STI looks like Dad’s station wagon, but there is less of that in-your-face, muscle bound, prize-fighter styling we adored. Fortunately, obvious performance cues, such as the functional hood scoop, bulging fenders, and rear hatch mounted spoiler, all remain.

Like all ‘08 Imprezas, the STI rides on a longer wheelbase with 103.3-inches between the axles. Cast 18-inch alloy wheels are standard, with forged BBS units an option, all driven by Subaru’s top 2.5-liter turbocharged flat-four with variable valve timing. With a high pressure turbo and big aluminum intercooler delivering 14.7 pounds of boost, it’s been retuned to 305 horsepower, a jump of 12, and 290 pound-feet of torque.

The STI’s added horsepower is, as before, routed to Subaru’s Symmetrical All-Wheel-Drive.

Like the race car it emulates, you can fine tune the performance of the STI to taste. The center differential now has nine settings, including six manual points to vary the front to rear torque split. A helical gear-type limited slip front differential, and a Torsen limited slip rear, adjust power side to side.  You can also set the level of electronic stability intervention, or just turn it off.

Then there is SI-DRIVE, which varies throttle response. Set to Intelligent mode, it reduces the chance of wheel spin on slick pavement, while Sport and Sport Sharp ratchet up response to peak levels.

In Sport Sharp, we launched our STI to 60 in 5.6 seconds, and through the quarter-mile in 14.1 seconds at 100 miles-per-hour. Both results slower than the slightly lighter, last generation car.

The new throttle system seems to have tamed engine peakiness which results in a smoother, if slower, build of power.  The same cannot be said for the 6-speed close ratio manual gearbox. Shifts are still stiff and a bit clunky.

In the challenging corners of Georgia’s Roebling Road Raceway, we found the STI’s aggressive attitude still intact. Turn ins are very quick, but the car has an overall lighter feel. More steering feedback would make it even better.

With the center differential on Automatic, and stability control off, the new STI is nicely balanced, retaining a bit of all-wheel drive front push. But dial the differential bias to the rear and the under steer is reduced to the level of a top-notch rear drive sport sedan. Very nice.

While the engine and suspension have been to finishing school, the Brembo ABS brakes still have a rough-and-ready feel. Stops from 60 averaged a short 122 feet, with strong vibrations through the pedal. 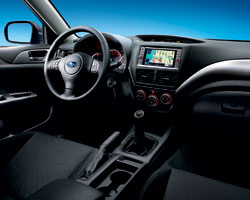 Rethinking the STI is also reflected in its cabin. Larger, and with much improved fit and finish, the interior is also extremely well equipped.

The deep sport seats are wrapped in graphite gray with black leather bolsters, and electro-luminescent gauges top a racy dash.

Standard goodies include a 10-speaker audio system with a CD changer and an auxiliary jack for MP3 players, plus automatic climate controls.

Still, this is a high performance machine, so Government fuel economy ratings are a fairly low 17 city/23 highway. We averaged 18.5 miles-per-gallon on premium gas.

Price wise, the WRX STI is also not the bargain it use to be. Base sticker is $35,640, up about $1,500, and that’s before you add the BBS wheels that were standard last year.

Still, that money buys a more livable WRX STI, and it’s still an over achieving performer, even if the more sedate look will probably turn off a few of the faithful.

But we all have to grow up some time; and if people did as good a job as the 2008 Subaru Impreza WRX STI, then maturing is something that every auto enthusiast would look forward to.