We remember it well. It was January 2004 when we got the chance to take the Cadillac CTS-V to a proper race track and see if all the hype surrounding this super sedan was for real. Well, it was. Never before had we driven a domestic sedan that was as fast and refined, both on the track, and on the streets to dinner. That CTS-V was amazing. So, what do we think of the all-new 2009 Cadillac CTS-V? Well, let’s find out!

It’s round two for “V” means velocity, as the arrival of the all-new 2009 Cadillac CTS-V had our four-door performance-luxury fans smiling from ear-to-ear.

Like the first CTS-V, the adrenalin pumping ‘09 job takes careful aim at Euro factory tuners like the BMW M5 and Mercedes-Benz E63 AMG. But, it’s more charged up than ever.

Super-charged, that is.  GM blessed this rear-drive uber-sedan with a derivative of the 6.2-liter V8 found in the Chevrolet Corvette ZR1.  With Eaton’s latest four-lobe supercharger, the resulting output stands at a whopping 556 horsepower, that’s 40% more than the first CTS-V, and 551 pound-feet of torque. It also easily outclasses both its M and AMG rivals. 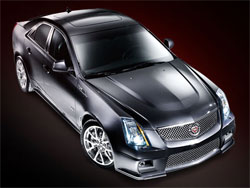 All of this energy is managed by either a new twin-clutch Tremec 6-speed manual gearbox, or a first-time available 6-speed automatic with steering wheel-mounted paddles and driver-selectable shift programs.

Through out traps, our velocity crew managed a super-quick 4.2 seconds with an automatic CTS-V. That’s more than a second quicker than the first CTS-V manual. The ‘09 CTS-V then catapulted through the quarter-mile in 12.7 seconds at 115 miles-per-hour. Gears are spaced perfectly, with third as the real workhorse.

Supporting the CTS-V is GM’s new gen Magnetic Ride Control rapid response suspension with track ready “sport” and street cruising “tour” settings. The StabiliTrak electronic stability control system can be switched on, off, or to a low-intrusive “competition” mode.

Its total high-performance acumen allowed the CTS-V to record the fastest lap at the Nurburgring Ring for any production sedan ever.

It showed us this same level of prowess during handling exercises at our home test site.  The CTS-V feel is heavy, but equally capable. As with the first generation, this is a car you drive, not toss around.  The tires are super grippy. The only thing you have to worry about is too much throttle.

Brembo brakes still rule the CTS-V. Silver front calipers stop single piece vented rotors, while red calipers indicates the optional “track” package and faster cooling 2-piece rotors. Stops with the standard fitment were strong, 117 feet from 60 to 0. That too is better than the original CTS-V.

On the outside, the CTS-V also communicates both more aggression and sophistication, starting with a larger dihedral grille for better cooling, and the bulging aluminum hood is a constant reminder of the supercharger below.  Flared fenders further intensify the car’s ‘might makes right’ attitude.  The CTS-V then finishes off with a new, muscular rear fascia, with appropriate V-badging and bright exhaust tips. 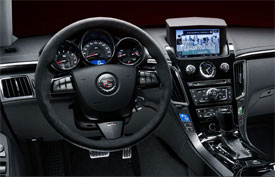 Within, the CTS-V retains luxury elements of the standard CTS, like the hand-stitched dash.  But this cabin also boasts a sporting edge, set apart with glossy black trim that runs down the center stack and over the center console.  Tunneled readouts are punctuated with a boost gauge and a “G”-force meter.

The available Recaro buckets are a must. With 14-way power their adjustable bolstering keeps you from sliding around at high “G’s.”

Not the ideal candidate for Green Car of the Year, the CTS-V has Government Fuel Economy ratings of 13 city/19 highway on Premium gas.  We managed 17.7 miles-per-gallon in real-world driving.

A key element of the success of M and AMG factory tuners is that each iteration is a significant improvement on its predecessor. Cadillac is following that ritual to the letter with the 2009 CTS-V. It is not a second chapter in seeking ultimate American sedan performance, it is a second coming.