Few cars have a thicker dealer accessory catalogue than MINI. While some of it is cosmetic, a lot of it is very serious performance. Witness the John Cooper Works kits that have transformed many a MINI Cooper S into an even more sensational performer. Well, that was the first step. Now MINI is working tuner magic right off the assembly line with the John Cooper Works model. Now this is one heritage edition we’re ready for.

Legendary British race car builder John Cooper built a formidable reputation as the original compact car tuner for his work with the original MINI. Today’s MINIs also benefit from this tuning expertise, now more than ever!

First on every performance fan’s list is more power, and the Cooper Works boasts an upgraded turbocharged version of the MINI’s 1.6-liter four, now with 211 horsepower and 192 pound-feet of torque. With a modified high flow, higher decibel exhaust, it delivers a 22% boost over that of the already entertaining Cooper S.

The engine is also equipped with a Sport Mode. Just push a button for even more aggressive engine mapping.

The transmission is a Getrag 6-speed manual; no slushbox for this sharp little blade. 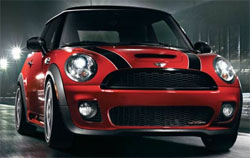 Complimenting the more aggressive drivetrain is a choice of three sport-tuned suspensions, including a racetrack-worthy kit direct from the John Cooper Works factory.

We hit our track with the John Cooper Works hardtop and registered a 0 to 60 of 6.5 seconds, plus a quarter-mile time of 14.8 seconds at 99 miles-per-hour.

The Cooper is quick off the line, but really hits in the mid-range when the turbo has maximum boost, and while the exhaust sounds sweet on the outside, there is a lot more engine buzz on the inside.

But it’s in Sport mode that the engine really comes to life, delivering a punchy free-revving performance that will delight any red-blooded performance car fan.

As will the ultra-nimble handling. Even with our base suspension package, the John Cooper makes the regular Cooper S feel positively lethargic as it charges through corners with lightning quick turn-in and mega grip.

To top it all off, the beefier brakes delivered stunning stops that averaged only 113 feet from 60. That’s just a few feet longer than a Porsche 911 Turbo.

With its tighter suspension and more powerful motor, the John Cooper Works is a bit noisier than the S on public roads. The ride is also a bit less forgiving over choppy pavement, though still quite acceptable by current sports car standards.

Government fuel economy ratings are 26 city/34 highway. We averaged 29 miles-per-gallon on premium grade gas. The John Cooper Works earns a thrifty Energy Impact Score of only 11.8 barrels of oil per year, and a carbon footprint of only 6.3 tons of CO2 emitted each year. 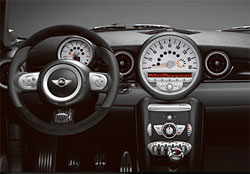 Inside the John Cooper Works cabin, glossy Piano Black trim gives it a racier look. Racy carbon trim for the dash and shifter is also available

Otherwise it’s the same quirky blend of old-world aesthetics and new age technology like iPod and iPhone interfaces that makes the MINI such a hit with modern buyers.

Body hugging Recaro sport seats are available, along with heat, and we recommend them.

Buyers who need a bit more space for people and cargo should opt for the Clubman which offers about 30-percent more room for enthusiasts who still have to get the kids to school and a full load of groceries home.

John Cooper gave the original MINI performance that matched that of many contemporary sports cars.

The 2009 MINI John Copper Works does the exact same thing; taking today’s MINI to a whole new performance level and truly living up to the legendary John Copper name.