With their world-wide road rally heritage as a backdrop, Mitsubishi says the new 2009 Lancer Ralliart reinforces the sporty identity of their compact series and fills a big gap between the commuter Lancer and the hot-headed Evo. But being the middle child is never easy. So let’s find out if the Ralliart’s balancing act is a positive or negative.

Like its predecessors, the 2009 Mitsubishi Lancer Ralliart serves as a connector between volume models like the GTS and the fiery Evolution MR and GSR, and though it borrows elements from each, it still has its own character. Designed to go head-to-head with the bottom end of Subaru’s WRX lineup, the Ralliart’s foundation is the same rigid platform as mainstream Lancers, as well as the Outlander crossover.

Mitsubishi then drops in a detuned version of the EVO’s 4B11 T/C turbocharged/intercooled 2.0-liter 4-cylinder. It’s armed with a single-scroll turbocharger as opposed to the EVO’s twin-scroll.  Output is 237 horsepower, that’s 69 more than the GTS, but 54 less than the EVO, and a robust 253 pound-feet of torque.

It teams up with virtually the same Twin Clutch Sportronic Shift transmission found in the EVO MR. With wheel mounted paddle shifters, it has Normal and Sport modes but lacks the MR’s track-ready S-Sport setting. The All-Wheel-Drive System comes from the previous generation EVO. With front and rear limited slip differentials, the Active Center Differential allows the driver to alter response for different road surfaces.

At a dry asphalt track, our Ralliart hit 60 in an impressive 5.4 seconds and raced to the quarter-mile in 14 seconds at 98 miles-an-hour. Both times are within a half second of the EVO MR. All-wheel drive and traction control ensure even grip, while the engine spins up rapidly with little turbo lag. Shifts come very fast and crisp with minimal power drop. 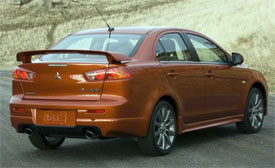 Upholding this performance is a firmer front MacPherson strut/rear multilink suspension. Upgrades include front tower bars, beefier front stabilizer bar, unique rear trailing arms, and standard stability control. Agility is thus nicely improved. The Ralliart turns in quicker and stays flatter. Again, more capable than the GTS but lacking the direct feel of the EVO. So while not a serious track-star, the Ralliart’s road-carving abilities do live up to its rally-car heritage while retaining a still comfortable ride.

The Ralliart also comes armed with upgraded all-disc ABS brakes. But even with dual piston front calipers, 132 feet from 60 is a tad long. Moreover, pedal feel was anything but consistent - soft at the top and grabby as you slowed.

We were grabbed by the Lancer Ralliart’s looks, however. Starting with the already tastefully sporty GTS, Ralliart adds a more EVO-like drop-jaw grille. The aluminum hood also touts EVO-style air intakes, while out back are blackened taillight bezels, twin exhaust outlets, and a large wing. The 18-inch alloy wheels also come from the GTS, but the rubber has been upgraded from all-season to summer performance. 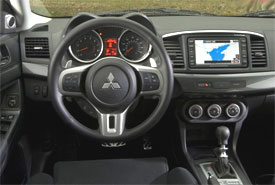 Within, the Ralliart has an overall competent and airy cabin layout shared with both the GTS and EVO. There are performance cues galore, like a sport meter speedo and tach; aluminum pedals; Ralliart logos; and the EVO’s leather-wrapped sport steering wheel with audio and cruise controls.

Seating can either be sport buckets from the GTS or upgraded Recaro seats found in the EVO. Optional user technology includes a 40 gig hard-drive navigation system and a 650-watt Rockford Fosgate stereo, and safety comes from seven standard airbags, including one for the driver’s knee.

Jumping to the back, there’s no stiffening brace behind the rear seats like the EVO.  This allows for the practicality of a 60/40 split folding feature.

Government Fuel Economy for the Lancer Ralliart is 17 city/25 highway on premium gas.  We achieved 23 miles-per-gallon in real world driving. The Energy Impact Score is a moderately high 17.1 barrels of oil per year, with a Carbon Footprint of 9.2 annual tons of CO2.

The Lancer Ralliart base price of $27,185 also fills the wide gap between the $19,000 GTS and the $33,000 EVO. By comparison, the Subaru WRX starts at $25,660. Mitsubishi continues to use its Ralliart branding to indicated enthusiast cars that can handle both daily driving and weekend boy racer duties. But, with the 2009 Lancer Ralliart, Mitsubishi has fine tuned that balance to near perfection. It’s the perfect middle child. A full member of the family? Sure! But, also unique enough to leave us with a very positive attitude.