If you know anything about Chevrolet Corvettes, you know the name Reeves Callaway. For nearly three decades his Callaway cars has been re-engineering already superlative corvettes into true supercars. And, each time we've gotten a taste of a Callaway corvette, we've become ravenous for more. So when we were offered a chance to sample his latest take on the plastic fantastic, we went all in. Only this time, it ran with a side kick.

Our first chance to try out this 2010 Callaway Corvette SC606 in January was rained out. But, the silver lining to that cloud is this very special Camaro, joining us for the make-up test. It's the prototype for 25 Hendrick Motorsports 25th Anniversary edition Camaro SS models to be built by Callaway.

But first, the Corvette. This Callaway SC606 was designed with the excellent Corvette Grand Sport as a starting point, and builds up from there with a comprehensive performance, appearance and handling package to rival Chevy's own Z06. But, unlike the Z06, Callaway gives you the option of adding automatic transmission, as well as a convertible body style.

In Callaway-speak, the SC model name signifies supercharging, and here that means an Eaton Roots-type blower sitting atop the stock LS3 V8. Callaway also adds their own fuel pump controller, high-flow intake and stainless steel exhaust systems. The next number is horsepower, and that's—you guessed it—606. Max torque is 553 pound-feet. The Callaway lineup includes 580- and 652-horse Vettes as well.

Harnessing that much energy is no easy task, but we achieved a best 0 to 60 run of 3.6 seconds. The quarter mile disappeared in a scorching 11.3 seconds at 125 mph. That's faster than the last Z06 we tested and almost as fast as the ZR1! And, Callaway's factory times are a heart beat faster still. 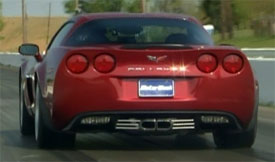 Power hits with a wallop and revs build super-quick. Callaway's short-throw shifter bangs through the gears with precision and the engine roars with a barely contained fury all the way to its 6500 RPM redline.

The beauty of Callaway's Corvette package is that it's not all under the skin, although it does retain most of the Corvette's stock bodywork. Sitting atop the engine and grafted to the stock hood is a louvered carbon-fiber power dome.

Callaway badging and the signature Double-D exhaust outlets complete the standard SC606 package, which adds just $20,900 to the Grand Sport Coupe. For this much performance, that's a screaming bargain, especially compared to the six-digit ZR1, and Callaway has a list of a la carte suspension and styling options available to suit every owner's tastes and budget.

And budget plays a big part in Callaway's Camaro offering as well, although this is not their first foray into Camaro production. You may remember the C8 they made from 1993 to 2002. This time around though, Callaway takes Camaro performance and refinements to new heights.

Peek under the tempered glass and carbon fiber Power Window, and you'll see how: A chromed Eaton supercharger, combined with Callaway's high-flow intake and low restriction exhaust, pumps the V8's power up to 582 and torque to 546 pound-feet. Carbon fiber injector covers are signed by Rick Hendrick and Reeves Callaway.

Inside, a numbered dash plaque and logos on the headrests, floor mats and sill panels are purely cosmetic, while a short-throw Corvette-style shifter is pure performance. With a judicious launch and a quick trip through the gears, we turned in a best 0 to 60 time of 4 seconds flat en route to a blazing quarter mile of 12.2 seconds at 118 miles per hour.

Power hits hard right off idle and climbs steeply to its 6400 rpm peak. The torque curve is nearly flat from 3500 to 5000 RPM, giving this pony car a huge sweet spot that kept us grinning the whole length of the track. 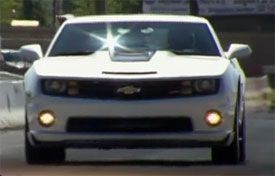 Exterior enhancements include a full carbon fiber CAM-AERO package with front splitter, rocker panels, a trunk lid spoiler, and deep rear diffuser. The look is subtle and the carbon craftsmanship is so flawless that we'll forgive the corny name.

The nine-spoke alloy wheels are the same size as stock and use stock SS tires, but they have a slightly wider offset to enhance the car's stance. Underneath, a coil-over suspension system improves the handling and lowers the ride height slightly without compromising vehicle dynamics.

Rick Hendrick knows a thing or two about building fast cars, so it is a testament to Callaway's engineering prowess that they were chosen for this project.

Exclusivity helps explain the hefty $76,181 price tag for this special edition vehicle and package. But, a Callaway Camaro SC572 package with the same go-fast hardware and only 10 fewer horses can be yours for a bargain $16,990 above the base Camaro SS price. An automatic trans version is available too, with 552 horses on tap. Regarding warranty, both the Camaro and Corvette variants offer the same 3 year/36,000 mile warranty.

Anyone can make a car more powerful, but few can engineer a complete package as well-integrated, or as Callaway puts it, "Powerfully Engineered," as these. They are mature performance machines with a dynamite kick. And now two more reasons to save for a rainy day!