Hyundai entered the compact crossover utility segment with the Tucson five years ago. And there it remained, very much untouched, as rivals loaded up with new and more appealing entries. So, clearly, a fresh Tucson was due. But Hyundai has once again surprised everyone. Rather than just another cookie cutter mass market CUV, the second gen Tucson sports a new high styled, premium look. Now it’s time to see if that style runs deep, or if it’s just a facade.

A few years back, Hyundai began an ambitious forward charge to challenge the top mass-market import brands in both quality and style. And that effort continues to build momentum with the all-new 2010 Tucson compact crossover. That said, the Tucson still faces stiff competition from the likes of the Honda CR-V, Toyota RAV4, Nissan Rogue, as well as the Ford Escape. And even though the Tucson is now 3.3 inches longer, and one inch wider than last year, it remains smaller overall than those key rivals.

But, it’s clearly larger than rivals when it comes to exterior design. Styled in Europe, it exudes a standout, premium image that is uncharacteristic for its price class. Head-turning cues include two-tier hexagonal grilles, with a very aggressive lower intake, and swept-back headlights and fog lamp cutouts. 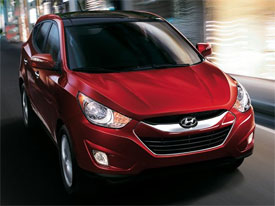 The back-end is taut and athletic with a Lexus-like spoiler and new wraparound taillights flanking a single piece liftgate. The Tucson is a plain-Jane utility no more.

And the same goes for the interior. The once bland and plastic-y cabin has been transformed into a stylish, well-crafted, and nicely appointed space.  The hooded dash and two-tone color scheme give the Tucson a deliberate air of drama.  Clear, podded gauges, and sensitive controls, are sophisticated and all work well.

The Tucson’s seats are shapely, supportive, but on the hard side. Available are leather trim, seat heat, and driver’s side power with lumbar. And the Tucson now offers Hyundai’s first panoramic sunroof.

For carting the family, the rear seat is roomy for a growing brood of three, or two adults.  However, it falls short in that it doesn’t recline or slide like some others in its class.  There is a 60/40 fold for versatility, but cargo room takes a big hit from the Tucson’s slick shape. Its max of 55.8 cubic feet falls well short of the 65 or better that is typical for its class.

There’s only one engine choice, down from last year’s two. But, it’s a strong one. The 2.4-liter variable-timing four-cylinder spouts 176 horsepower and 170 pound-feet of torque, or more horsepower than the former V6 option.

There are two transmissions.  A six-speed manual with front drive, and a six-speed automatic with front or all-wheel drive. The AWD system includes a driver selectable lock for a 50/50 front-to-rear torque split. All Tucson’s include Hillstart Assist and Downhill Brake Control, along with electronic traction and stability control, and four-wheel ABS disc brakes. 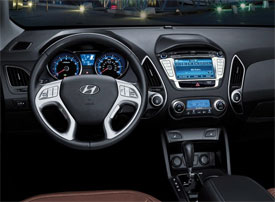 With the best power-to-weight ratio in its class, the new Tucson feels strong in all traffic situations.  It jumps off the line with plenty of confidence and has no issues with interstate passing.  We were more than impressed with this engine’s ability to harness power without undue harshness.

Road manners are quite spirited, with a newfound emphasis on handling.  Turn-ins are quicker and more precise than last year. The Tucson definitely feels sportier than competitors like the CR-V and RAV-4, and its 34.7-foot turning diameter is near class best. Steering, however, lacks feel, and effort is very heavy at highway speed.

There is also the issue of ride quality. Our all-wheel drive Tucson felt harsher than prime rivals-tauter than even the Volkswagen Tiguan. Front-drive Tucsons are softer sprung, and ride considerably smoother.

As before, prices make the Tucson one of the best values in its class. Base sticker for GLS trim is $19,790.  The very well-equipped Limited starts at $25,140.

In sum, the 2010 Hyundai Tucson is vastly superior to its predecessor.  It is also now a formidable challenger in the highly competitive compact CUV segment.  Despite its shortcomings in cargo space and ride, the Tucson offers a lot in the way of style, road manners, technology, fuel economy, and value.  Don’t look now, but it appears that Hyundai has added yet another winner to its ranks.