Ever since Hyundai acquired rival Kia, it’s been a full throttle effort to transform the Korean brand’s image from a maker of inexpensive, basic use vehicles, to a high quality, mainstream mark. But their latest effort, the compact Forte, goes head-to-head against industry benchmarks Toyota Corolla and Honda Civic. While the Forte is clearly the most handsome Kia small car ever, it needs more than looks to stay in this race.

The all-new 2010 Forte is a breath of fresh air for the Kia lineup, and simply saying it replaces the generic Spectra would grossly underrate its potential impact.

Available now in a Sedan and Koup, with a “K”, its slightly edgy, American-sourced styling strikes a richer stance than any other Asian mass market small car.

The front-end of our test Forte Sedan, with its flared headlamps, smart-looking grille, and clam shell hood, does have a passing resemblance to the Honda Civic.

But, the well drawn character lines, and up swept side glass, give the Forte Sedan a sharp profile that is its own, and 15, 16, and 17-inch wheels and tires, along with a beefy rear-end, with wrapped and sectioned taillamp housings, cement the image of a well built small sedan. 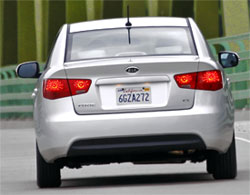 Even with more power, Government Fuel Economy ratings for our SX are class competitive at 23 city/31 highway using regular gas.  We managed an okay 27.6 miles per gallon in real world driving.

The Forte’s Energy Impact Score is 13.2 barrels of oil consumed per year, with a concise Carbon Footprint of 7.1 annual tons of CO2 emitted.

But, that car will be more sluggish than our SX which still needed 8.9 seconds to accelerate from 0 to 60, finishing the quarter mile in 16.8 seconds at 84 miles per hour. Off the line, the Forte felt energetic, with a good hookup, and steady power build. But the pace was hurt by slow shifts. And, while Kia engines have come a long way, our car’s 2.4 was still buzzier and less refined than top rivals.

Ride and handling show even more improvement. The Forte’s front strut and rear torsion beam suspension adds standard Electronic Stability and Traction control. A high value plus over most rivals.

And it showed. Through the cones our car felt very solid, with no flexy or flimsy feel. Steering is nicely responsive. Front push does come on quickly, so Forte is not as nimble or fun-to-drive as the all-independent Civic. But, it gets through with less body roll.

On more typical pavement, we found the Forte’s ride to be more sophisticated than we expected as well. Not soft, but not stiff either. Here, the Forte is more akin to the Corolla XRS.

The Forte’s Brakes are well above class average. Four-wheel discs with standard ABS and Brake Assist. Hard stops proved short at only 122 feet from 60. Stability was great. The pedal could have more feel but that’s a nit-pick.

The Forte’s cabin matches the exterior. It’s far more inviting than the Spectra, with a Civic and Corolla beating 96.8 cubic feet of passenger space. 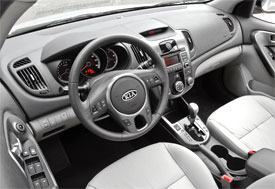 The dash design is a toned-down version of the Kia Soul, with its overlapping gauges and boogey-board shaped center stack.

Seats are comfortable and well formed with leather an option on our top-level SX, which also included a tilt/telescoping steering wheel.

Forte standard equipment includes six airbags, a CD/MP3/satellite radio, USB port, and Bluetooth. But, air conditioning is an option on the LX.

The rear seats offer decent legroom - even for a six footer - as well as a standard 60/40 split folding feature which extends an already highly useful 14.7 cubic foot trunk.

Wow. We knew going in the 2010 Forte to be a generational improvement in Kia small cars. But, to be a serious alternative to the Civic and Corolla is packaging, power and economy, ride and handling, and style, is a surprise. But then Kia has been surprising us for years, and the compact Forte is just their latest tour to force.