The idea of the all-electric car has already captured the consumer’s imagination. The thought of never having to visit a gas station again makes just about everyone smile. Still, since there are no modern electric family-style cars yet on sale here, it’s hard to separate the long term promise of the electric car from the near term fact. So, when Mitsubishi offered to loan us a Japanese version of their subcompact I-MiEV electric for a little reality check, we plugged right in.

Based on the Mitsubishi i-minicar platform, the i-MiEV is a four-seat EV that went on sale in Japan in 2009, and has already undergone a successful test program by American utility companies. The egg-shaped plug-in i-MiEV is propelled by a 47 kilowatt permanent magnet electric motor that’s powered by a 330V air-cooled lithium-ion battery.  Maximum output is 63 horsepower, with a strong 133 pound-feet of torque.

In Japan, Mitsubishi says the i-MiEv has a range of 80-100 miles. But in our week with the i-MiEV, we found that to be very optimistic. The most we ever saw with a full charge, on a 95 degree day, was an indicated 90 Kilometers or about 55 miles. That’s when we turned the i-MiEV over to writer Shamit Choksey, who lives the furthest from our office. 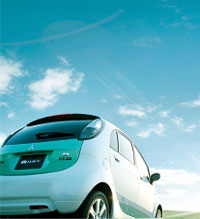 SHAMIT CHOKSEY: So I know what you’re thinking…it’s green and it’s electric, but will it leave you stranded from point A to point B on your commute to and from work? I took the i-MiEV on my 35-mile commute, all back roads, and drove kind of light-footed.  I was a little trepidatious as to whether this car would keep its charge.  When I left, it was a full charge, but I left the A.C. off and the stereo off, and my eye kept wandering from the road to the gauge to see how much how many miles I have left to get home. I did. I got home; I pulled into my driveway and still had 50 kilometers left, and more than half a charge, so it inspired a lot of confidence.  What it proved to me was this car is more than adequate for the average daily commute for anybody.

Now, we were able to recharge the i-MiEV during work hours. For those that can’t, the i-MiEV is still practical for the typical round trip commute of 40 miles. But some on our concerns were also about life issues.

BEN DAVIS: There’s definitely adequate range for someone who can get into a routine of A to B, or a work commute or something.  And being able to plug it in at your place of work is even better.  But what worries me the most is that there is bound to be a point of no return for a lot of people.  Say you’re just doing leisure activities, going to a concert or the airport and you forget your tickets, there might not be enough power for you to go back and then finish your destination.  Or you get to work and say an emergency develops and you’ve got to leave, you might not have enough power to get back.  And that’s always going to be at the back of my mind.

Since electric motors deliver maximum torque almost immediately, the lightweight i-MiEV launches with plenty of umph. At only 11 feet long, the i-MiEV is also highly maneuverable, with excellent visibility in all directions.

Inside, our right-hand drive i-MiEV was clutter free with an adequate stereo, and a/c that kept up with the August heat. But more important to us were the range and battery indicators.

It’s hard to concentrate on driving the i-MiEV because you keep looking down at the falling range indicator, so for me, electric car range anxiety is a real thing. I would love to have one of these as a second or third car, but only if I had a backup. And that is the reality of all-electric cars at least today. Now improve the batteries, and provide the range of say a half a tank of gas, and everybody’s going to want one of these.

Still, Mitsubishi believes the market is ready for the i-MiEV now. A North American version arrives in the fall of 2011 at a price of under $30,000 before tax incentives. That’s less than the larger Nissan Leaf.

It’s green, it’s electric, and it keeps you away from the gas pumps.  The Mitsubishi i-MiEV is a somewhat basic approach to emission-free motoring, and it certainly isn’t for everyone, but it’s still the strongest evidence yet that electric cars are here to stay.