Rumors of a baby Rolls Royce have circulated for years. But, when the Ghost arrived for last year’s Frankfurt Auto Show, there was little baby about it. True, it is smaller and lighter than the flagship Phantom, but it still is huge by global luxury car standards. And, at first stare, it appears to have all the presence a self-respecting chauffer could wish for. But, one of the goal of the Ghost design was a Rolls Royce that the owner might actually want to drive themselves! And, that’s where we jump in with a closer look.

Rolls Royce refers to the 2010 Ghost is its entry-level vehicle. But, at this top tier of British luxury, we have to smile at that designation.  The 4-door Ghost is as haunting and lavish as any Rolls before it.

Though some parts are shared with the BMW 760Li, the near-18-foot Ghost is mostly contemporary Rolls Royce. The front-end dons a more streamlined Rolls grille, if still topped by a retracting Spirit of Ecstacy hood ornament. The Yacht Line styling flows with more grace than on the Phantom, and the slit HID headlights are less ostentatious.

But, there are the vintage front-swinging rear doors that reinforce the Ghost’s pedigree. Still, the upward-sweeping sill line, big 19- or 20-inch wheels, and optional chrome exhaust pipes do give this Rolls a more dynamic stance.

That dynamism is spirited on by BMW’s new direct injection 6.6-liter twin-turbo V12.  Its 563 horses-110 more than the Phantom-and huge 575 pound-feet of torque moves to ground through an eight-speed automatic. And through the traps with an almost supernatural 0 to 60 of 4.7 seconds-over a second faster than the Phantom-and scared the quarter-mile in just 13 seconds at 114 miles per hour.

Even at 5,500 pounds, the Ghost takes off like a banshee. Still, the whisper-quiet V12 casts its loads of power through silky smooth shifts all the way to the redline.

In our ‘08 Phantom test, we found its expansive nature was, at times, cumbersome in corners.  The Ghost’s driving character, however, is far easier to contain. In fact, the double-wishbone front/multi-link rear suspension and four-cornered air suspension really do make this a sporting Rolls. Along with minute adjustments for road and driver, the air suspension also raises and lowers the Ghost almost an inch.

The Ghost handles better as speeds climb. The under-35 wallow and roll quickly gives way to a tauter response as the Ghost’s BMW genes show through. Steering is light and relatively quick, though a little soft on feedback. On normal roads, the float returns, but just enough to allow the Ghost to hover around bends and over broken pavement, making them all disappear.

And to stop this Ghost in its tracks, oversized four-wheel ventilated ABS brakes do the job.  Straight, fade-free stops from 60 to 0 averaged a short 115 feet.

Entering the Ghost is like boarding a handsomely luxurious private rail car. Except here, you’re in control. All the materials are beyond reproach-flawless leather, and fine wood from a single tree. They backdrop the more necessary bits, like white-faced, driver focused gauges, and ergonomically sited controls.

The front buckets are beefy and lounge-like, with seat heat and a massage feature. 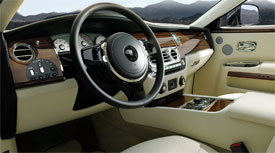 Classic organ stop round vents front for a modern four-zone automatic climate control system. Standard too, is a 16-speaker stereo and navigation, all managed by a BMW iDrive central controller adapted to the Ghost.

Cameras are a big part of the Ghost’s safety story. The Night Vision grille cam works with Pedestrian Recognition, while rear, front side, and top view cams can combine to eliminate vision problems at junctions, as well as when parking.

Jump to the rear seat for another lounge atmosphere. A bench is standard and individual seats optional. Theater Configuration includes a pair of LCD screens for personalized entertainment. As you might expect from a Rolls, the selection of creature comforts abounds. But twin umbrellas in the doors are standard protection against sudden downpours. Carrying that set of handmade luggage in the Ghost is not a problem either.

And, for the record, the Ghost earns Government Fuel Economy Ratings of 13 city/20 highway on Premium gas.  We managed 17.3 mpg in real-world driving. Also for the record, the Rolls Royce Ghost is priced at $248,700 to start. A big number, but still six figures less than the Phantom.

While the Ghost is a name steeped in Rolls Royce history, the new car is all about the brand’s future. While still brazenly extravagant, the team at Goodwood has also delivered a totally modern saloon, and one that the super affluent may actually demand to drive themselves. And we predict more than a few fights with the chauffer about that!