For more than a generation, Volvo has built its American reputation on two things: safety and its premium station wagons.  Even when wagons fell out of favor at other brands, they remained an attraction for Volvo purists.  But, some of those fans did defect to the Volvo XC90 Crossover.  Now, with the all-new XC60, it’s possible that a lot more just might be tempted to follow suit.

The 2010 Volvo XC60 may be a late entry into the premium compact-to-midsize crossover race, but don’t expect this stylish and sporty utility to trail behind for too long.

The XC60 will compete directly with the BMW X3, the Acura RDX, and the Mercedes Benz GLK.

Styling hints of the XC70 and XC90, but from there the familiar Volvo DNA runs a little wild.  The modified trapezoidal grille is flanked by dramatically flared headlamps.

The XC60’s wedge-like forward-leaning profile makes this crossover look like it’s ready to pounce.  A muscular shoulder line, lower body cladding, and a coupe-like greenhouse all add to its athletic presence, as do the 18 or 19-inch wheels.

Further distinction comes from a well-sculpted back-end. But the most eye-catching cue is, no doubt, the exaggerated boomerang-like LED tail lamp design. 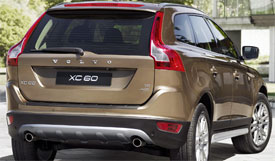 But this wouldn’t be a Volvo road test without a truly novel safety breakthrough. That would be Volvo’s City Safety System. City Safety is a low-speed rear collision avoidance system that utilizes an infrared laser in the rear view mirror to detect a stopped car ahead. City Safety will automatically apply the brakes at speeds up to 18 miles-per-hour to prevent a crash.

We don’t recommend you trying City Safety out just for grins like we did since it doesn’t activate until the last possible second.  And stops are quite abrupt and really get your attention.

At the track, the XC60 also impressed us with its quickness. 0 to 60 in just 6.7 seconds and the quarter-mile in 15.2 seconds at 97 miles-per- hour.  This crossover has a strong, smooth pull all the way up to the redline. Shifts, however, were not as quick as we would have liked them to be.

Maybe we expected too much, since this is a luxury car, but ride definitely rules over handling. The XC60 exhibits a top-heavy feel and reached its limits somewhat quickly.

Braking redeemed the XC60. Four-channel all-disc ABS with Brake Assist delivered average stops from 60 of a short 127 feet. They were solid and straight with minimal nose dive.

On everyday roads, the ride was soft and plush, perfect for Monday-through-Friday commutes.  But with 9.1 inches of ground clearance, taking the XC60 off the pavement for a weekend adventure does not have to be a second thought.

The interior of the five-passenger XC60 is a continuation of the clean and modern Scandinavian design we liked so much in the XC70 and C30. Gauges and controls are smartly laid-out and exude an artful sophistication.

The XC60’s seats are well-contoured and supportive, featuring stitched seams and optional heat.

And not to be forgotten, our tester’s upgraded Dynaudio Premium Sound System with surround sound, for memorable listening enjoyment.

The rear bench seat is fit for three, but it’s not the most spacious we’ve seen. Its 40/20/40 split, however, is family friendly, as are a pair of optional integrated child booster seats.

Government Fuel Economy for this crossover is an underwhelming 16 city/22 highway on premium gas.  We managed to get 20.6 miles-per-gallon in real-world driving.

The eye-catching 2010 Volvo XC60 offers everything an upscale family could wish for - innovative safety, strong performance, true multi-purpose capabilities, and a comfortable, sophisticated cabin. For a company steeped in the tradition of the station wagon, the XC60 is a nice step up that doesn’t’ forget its roots.