While most buyers think of Buick as a posh, premium brand, their performance car history actually dates back to the legendary straight-8s of the 1930s. In more recent decades, the Regal nameplate carried the best of Buick’s performance intensions. So it makes sense that when Buick planned an all-new, mid-size sports sedan that the Regal name would once again appear. But this Regal is not like any Buick we’ve driven before.

After a six-year absence, the Buick Regal returns for 2011 as an all-new Euro-bred, front-drive sports sedan. Developed at Germany’s famed Nurburgring, the new Regal is a near doppelganger to the Opel Insignia â€“ Europe’s 2009 Car of the Year, and the most promising entry from GM’s tri-shield division since the Grand Nationals of the 1980’s. To that end, the Regal will compete with premium-level sports sedan like the Audi A4, Acura TSX, Volkswagen CC, and Volvo’s new S60.

Initially imported in premium CXL trim only, the Regal touts the same sleek and upscale design language, but adds a healthy dose of frontal aggression from the LaCrosse and Enclave - an oversized Buick waterfall grille, flanked by prominent, swept-back, non-HID headlamps. 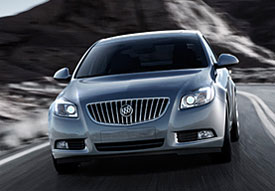 Power will be a surprise to some, four cylinder direct-injected powertrains only from GM’s Ecotec family.  The standard 2.4-liter, shared with the Lacrosse and Chevy Equinox, delivers 182 horsepower and 172 pound-feet of torque.

Optional is a 2.0-liter twin-scroll turbo with 220 horsepower and 258 pound-feet of torque. An even higher-performance turbo GS arrives next year. The 2.4 is mated to a self-shift six-speed automatic, while the 2.0 turbo offers a proper six-speed manual as standard and automatic as option. Unfortunately, for our test runs only a 2.4 automatic was available.

And while it felt pretty peppy off the line, it was only adequate overall; taking a longish 9.4 seconds to get to 60, and 17 seconds to complete the quarter mile at 84 miles per hour. We’d definitely opt for the 2.0 turbo. But, it is taking corners where this Regal shines brightest. The Epsilon II chassis, with its strut-type front, and four-link rear suspension, both with a hollow stabilizer bar, delivered an impressive level of agility and nimbleness.

This Regal meets all the European sports sedan cliches.  It handles like it’s on rails.  It feels bolted to the road.  But you’ve got to remember, this is a Buick and it’s made in Germany, and that puts this Regal in a whole new light. The Regal’s spacious and well-appointed cabin combines classic Buick styling with modern sports sedan cues. 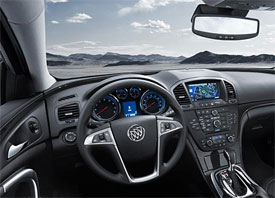 Fit and finish are on par with anything in the premium segment, although the dash is mostly hard plastics. On the other hand, gauges and controls exude a decidedly upscale quality.

But oh-so European is the absence of an available rear view camera. As is the console mounted, multi-function central controller for Stereo, Nav, Bluetooth, and even OnStar. The rear seat is comfortable for two adults, but tight for three.  And the 60/40 split-folding feature adds length to the already very usable 14.3 cubic foot trunk.

Government Fuel Economy Ratings for the Regal 2.4 are 19 city/30 highway. We achieved a fine 27.1 on regular in real-world driving. The Energy Impact Score is 14.9 barrels of oil consumed per year.  The Carbon Footprint is a relatively modest 8.1 annual tons of CO2 emitted.

Pricewise, the new Regal is very competitive.  The 2.4 CXL has a base sticker of $26,995.  The CXL Turbo starts at $29,495. More models and a lower entry price will follow when Regal production moves to the U.S. next year.

Despite its stodgy name, the 2011 Buick Regal made a great impression on us. Yes, it needs the 2.0 turbo manual to be truly competitive to its European rivals. But even the standard car we tested was a revelation. We just hope the Regal is not a one-off effort, and that Buick performance is back for real.