No import brand has ever racked up sales success as rapidly as Hyundai. Watching this Korean brand replace its poor quality image with one of high value and reliability has been breathtaking. But, it wasn’t magic. New product after new product has wowed the critics and buyers alike. The past 12 months alone have seen a new Genesis coupe, Tucson utility, and now, an all-new, midsize, American-made Sonata family sedan. It’s yet another Hyundai designed to change the status-quo.

Sales of the 2011 Hyundai Sonata are already taking off, and it’s not hard to see why. An all-new, come-hither exterior is riding the first wave of Hyundai’s Fluidic Sculpture design language, along with the redesigned Tuscon crossover. The pedestrian styling of past Sonatas is gone for good. This new car is long and low; with flowing, coherent lines everywhere the eye is drawn.

Bookending a large, expressive grille are swept-back headlights, showcasing fine detailed buckets and bezels. Fog lamps are standard on all but the base car. There’s a subdued slash of chrome down each side, as the sleek greenhouse immediately separates it from rivals like Camry, Accord, Malibu, and Fusion.

Even the door handles accentuate a character line that runs from behind the front wheel wells to the huge, spear-shaped taillights. Wheels themselves are 16, 17, and 18 inchers. Ours wore a handsome 17-inch alloy set. While midsize outside, like Accord, the Sonata’s total interior volume qualifies for Large Car EPA status.

That interior also has a premium look, even on the base car, but here echoing the curves and materials of Hyundai’s Genesis clan. 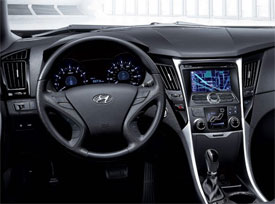 Our Limited’s leather seats were almost as curvy as the sheet metal, and plenty supportive. They feature heat and eight-way power for the driver. There was also plenty of interior storage along with deep cupholders.

Audio comes with six, seven, or eight-speaker varieties, with premium, Infinity sound as the top-shelf option. All with standard iPod, USB, and Aux input jacks. Touch-screen navigation with backup camera, plus weather and stock info, is an option. Standard on the Limited—and optional on GLS and SE models—is a power sunroof.

The rear seat, also heated in Limited trim, is very roomy. The seats split and fold for long cargo, but the release levers are located in the trunk. Trunk’s cargo space, at 16.4 cubic feet, is truly large car size and at the top of its class.

Initially, there is only one engine choice: Hyundai’s new 2.4-liter, direct-injected I-4. In standard form, it’s good for 198 horsepower and 184 pound-feet of torque. The Sonata SE’s sport-tuned dual exhaust bumps power up to an even 200. All-new six-speed transmissions-manual and manual-mode automatic-are lighter than the five-speeds they replace.

Government Fuel Economy Ratings for this Sonata 2.4 automatic we tested are pretty impressive at 22 city, 35 highway. Expect 26 in normal driving on regular gas. Two variations on the Sonata theme—a 274-horsepower turbo, and a 39-mile-per-gallon full-hybrid—bowed at the New York International Auto Show in March, and will arrive at dealerships late this year. 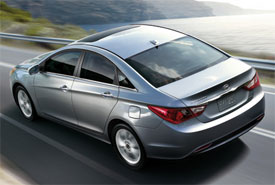 We wrung out a new Sonata on the mountain roads above La Jolla, California. It pleased us with firm, hunt-less gear changes. Zero to 60 sprints of a little over eight seconds indicate this Sonata’s straight-line performance is quite acceptable.

As it is in turns. The MacPherson strut front and multi-link independent rear suspension produced a surprisingly high level of lateral grip with minimal body roll. We made short work of switchbacks with its sport sedan-caliber suspension tuning, and nicely-balanced, responsive steering.

Plus, with a turning diameter of only 35.8 feet, it’s agile in town, too. Brakes are ABS discs, with other electronic watchdogs like stability and traction control standard on all trims.

Low price has always been a Hyundai strong suit. But the new Sonata adds a stunning exterior, well-crafted interior, and exceptionally fuel-efficient four-cylinder power to the list of reasons to consider buying this Korean-American four-door, not to mention a 10-year/100,000 mile powertrain warranty. Indeed, the 2011 Hyundai Sonata could just mean that the family car market will soon be dancing to a whole new tune.

The still new 6th generation, 2011 Hyundai Sonata is already both a consumer and critical success. It even beat out stalwarts Camry and Accord in our family sedan shootout.

So, what's it like to live long-term with Sonata? Well, so far, after two months and 3,500 miles, we're impressed. The cabin is spacious, the ride is quiet, handling is above par, and the gutsy 198-horsepower 2.4-liter I-4 engine is so far very frugal at 28.1 miles per gallon of regular.

Our only beefs...some of the switches have a coarse feel, and Hyundai needs to beef up the air conditioning for long hot summers like this year.

Overall, however, fit and finish of our U.S.-made Sonata are better than class typical, and from the outside, more than one passerby has asked us how we like our new Mercedes.

Well, we won't put Sonata in that realm, at least not yet, but it is nice to be asked.

You'd have to live in a cave not to know the sixth generation 2011 Hyundai Sonata is a runaway hit.

And, after 3 months and 5,263 miles, it continues to shine with us. We love its swoopy, upscale styling, high content, and very comfortable interior. Quiet ride and fine handling. And even fuel economy.

There is a recall on the steering wheel linkage. A connection may have been improperly tightened during assembly. If you notice vague steering, call your dealer immediately.

The the all-new 2011 Hyundai Sonata is selling like hot cakes. No wonder.

This stylish American-made four-door is quiet, roomy, well-equipped, fairly priced, and even efficient. With four-cylinder power only, our car's very able 198-horsepower 2.4-liter is returning 28.3 miles per regular gallon after 7,200 miles.

We've had no problems in five months, although there is a recall on steering linkage that no owner should ignore.

We're very fond of the Hyundai Sonata and think it's easily one of the best family cars you can buy.

A lot has happened since our last report on our long-term Hyundai Sonata. For one, it earned our Drivers' Choice award for best Family Car of the Year! For another, we've driven both the Sonata Turbo and Sonata Hybrid, and crowed that this mid-size sedan lineup is now the one all others must match.

All while racking up miles on our long-term Sonata Limited at a rapid pace. After 8 months, the odometer is approaching 16,000 miles, and there's not been so much as a hiccup when it comes to quality.

The 198-horsepower 2.4-liter four is a little noisy at startup, but all is forgiven thanks to its steady 27.8 miles per gallon of regular fuel economy.

This stylish, American-made four-door is roomy, efficient, and fairly priced. No wonder the Hyundai Sonata is a winner.

Our Drivers' Choice pick for best Family Car of the Year soldiers on with nary a problem. Even gripes are minimal. Engine noise during cold starts or when pushed hard is about it after 9 months and nearly 19,000 miles.

Fuel economy slipped a bit due to more in town driving. Still, 27.5 miles-per-gallon of regular is good such a sizable car.

And that's the best part. A glamorous exterior that looks more Mercedes than Camry, combined with a true five adult interior, makes the Sonata a genuine segment trendsetter. Plus, it's American made.

The 2011 Hyundai Sonata is our Drivers' Choice pick for best Family Car of the Year. That means that we give our long-term Sonata even more scrutiny than normal.

After 10 months and over 19,000 miles, we've had not major problems, but there is some premature wear. The driver's seat is fraying at a seam. We also think top Limited trim should include a power passenger seat.

Fuel economy is holding steady at 27.5 miles-per-gallon of regular, despite a lot of low speed use.

But amazingly, even with so many Sonata's already on the road, it still turns heads. It's that great looking. And hopefully, will remain so for a lot more miles to

Second spot would probably go to the mid-size family sedan. In that category, we'd put up our 2011 Hyundai Sonata Limited as a shining example.

After 12 months and nearly 21,000 miles, we've had no mechanical issues. A seam on the driver's leather covered seat is giving way, but that's about it.

Fuel economy is now up to 28.4 miles per gallon of regular. A couple of years ago only compact cars did that well.

As Honda, Toyota, and now Hyundai have made clear, a big car can do fine with a top-notch four cylinder engine like the 198-horsepower 2.4-liter in our Sonata. It's smooth, and quiet except when cold at startup.

And with a long summer ahead, our Sonata will be doing a lot of that.

Our 2011 Hyundai Sonata is one hot seller with an average of over 18,000 hitting the road each month.

As we said when picking the Sonata as our Drivers' Choice Best Family Car, its stunning exterior, well-crafted interior, and generous warranty, make it the new standard in mid-size sedans.

After a year and 22,000 miles with our Sonata Limited, we'll also add dependable. Only an open seam in the driver's seat is an issue.

Plus, armed with the standard 198-horsepower 2.4-liter, fuel economy is more than acceptable at 27.8 miles per gallon. Although, that is down from last report.

No wonder our staff finds the Sonata a popular summer traveler.

This looks like our last summer with our 2011 Hyundai Sonata Limited. After 14 months, and some 23,000 miles, we’re returning this terrific mid-size sedan to its corporate garage.

Our Drivers’ Choice Best Family Car pick has rewarded us with style, comfort, and efficiency. 28.1 miles per gallon of regular for a car this large is impressive. And still, the 198-horsepower 2.4-liter 6-speed automatic drivetrain met our every demand. It ran smooth and quiet except when cold at startup.

As to other issues, a frayed seat seam was the only mar in the Sonata’s durability story. We had no mechanical issues whatsoever.

Sonata’s 10 year/100,000 mile powertrain warranty delivers great peace of mind too. Month after month, Hyundai is setting sales records, giving all other brands, import and domestic, a lot to worry about. The Sonata is one of the big reasons why.

Great to look at, and even greater to drive, it is the mid-size family sedan to beat.

It’s always hard to say goodbye to a long term test vehicle. After a year, they really do become a part of the family. But, saying farewell to the Hyundai Sonata mid-size family sedan was even harder. In our minds, the Sonata raised the bar by adding high style to an overall highly comfortable and reliable class of cars.

On that last point, we had only one fault: a split seat seam. Not bad for some 23,000 miles of service. Our Drivers’ Choice Best Family Car pick also proved quite efficient at 28.1 miles per gallon of regular. Many compacts do no better.

The smallish engine that made that possible, a 198-horsepower 2.4-liter four, still surprised us with good power for passing. The only rough edge was a rough idle when cold.

Our Sonata Limited did have all the bells and whistles to keep us comfortable. But, even the base Sonata GLS is well equipped. And, all carry Hyundai’s generous warranties.

After a lot of sweet notes, we’re sorry to see our Sonata’s song come to an end.