Infiniti dealers have been begging for a new halo car ever since the ponderous Q-series was retired in 2006. While Infiniti had hoped the somewhat smaller M-series could play the part, it’s reviews as a showroom star have been lackluster at best. But now that may change. The M-series is again reborn, and it finally looks like it just might master the part. So let’s raise the curtain and see how it acts.

In Japan, it’s called the Nissan Fuga.  Here in the States, it’s called the 2011 Infiniti M. Regardless of its badge, this redesigned, premium four-door sedan retains the swoopy, long hood, high rear deck form for which the M-Series is well known, but now adds sleeker design language to project a more expressive, upscale, and substantial image.

Wheelbase is unchanged, but the M-Series is now slightly longer, wider, and lower than before. A new low slung grille is flanked by swept-back crystal-look headlight clusters. The profile is defined by deeply sculpted fenders and flowing wave-style doors.

But the M’s brawniness comes from its chunky C-pillar area, which almost gives the car a jacked-up muscle car vibe, complete with sporty dual exhaust. Exhaling through those pipes are a pair of stronger engines. The M37 sports the G’s 3.7-liter V6. Horsepower is 330 – an increase of 27 over last year's 3.5 V6 - and torque is 270 pound-feet – up eight. 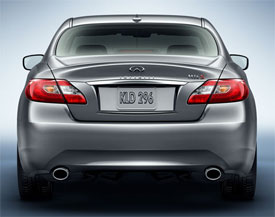 The lone transmission is a seven-speed automatic with Adaptive Shift Control, feeding either the rear wheels or all four on "x" models.

Remarkably, even with a big boost in power, fuel efficiency is up too. Government Fuel Economy Ratings are 18/26 for the M37, and 16/25 for the M56. A new feature, Eco Pedal, provides feedback to encourage efficient driving. Infiniti claims a five-to-ten percent economy gain.

But a bigger increase comes in performance: the M feels much stronger. We judge the M56 to be capable of 0-60 in under 5.5 seconds. That puts it in the league of the Mercedes-Benz E550.

Still, after testing both engines, we found the V6 to be more than adequate for most buyers. With the V8, there's more power, but the front-end also felt heavier and less responsive. The new Drive Mode Selector adjusts throttle response and shift points to one of four settings; Standard. Eco, Sport, and Snow.

Still, optional Active Trace Control, which adjusts engine torque and braking at all four wheels, does help to smooth out turn-ins. Brakes are enhanced, too, but only with the Sport Package, which brings larger rotors with four-piston calipers front, and two-piston rears. So, we judge overall dynamics to be both more sporty, yet still luxurious. Neither soft and Lexus-like or taut and BMW-like. Rather, the M is smack dab in the middle. 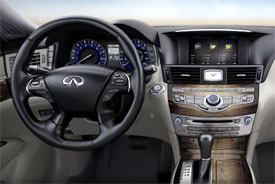 The interior also benefits greatly from the M's new design language. It now looks like a top drawer sedan. From the twin-hump instrument shroud, to the stepped center console, the look and feel is both athletic and luxurious.

Higher-end options includes Navigation with satellite traffic and weather, a back-up camera, a 9.3 gig hard drive Music Box, and a Bose stereo. The rear seat is roomy for two adults, three in a pinch. The seats do not fold, but there is a pass-thru which leads back to a spacious 14.1-cubic foot trunk. For advanced safety technologies, the M offers Distance Control Assist, Intelligent Brake Assist, and Blind Spot Intervention. A world first, it uses selective braking to correct lane drift.

While it still takes up little less pavement than most flagship sedans, the 2011 Infiniti M-Series gives up nothing in style, accommodations, or performance to rivals. The curtain is up, and Infiniti's new star is more than ready for a command performance.