Even before their divorce from Ford, Jaguar was transforming its cars from a classic grand touring image of the 20th century to a British showcase of sophisticated motoring for the 21st century. Now, the mid-size XF sedan set the stage, but everyone knew the make-or-break star would be the top-tier XJ saloon. Now, our first impressions were very positive. So let’s have a complete critique.

The all-new 2011 Jaguar XJ follows the XF into a bold new world of styling for this classic brand. Aside from grille texture and badging, Design Director Ian Callum has left nary a hint of the previous XJ, choosing to go back further for inspiration. Instead of the familiar four-orb headlights, two swept-back cats-eye lamps are set in low, sculpted fenders. But XJ heritage is still sensed in the rounded-off grille and long hood that date back to the original 1968 Series I.

With so much sloping glass, there is very little trunklid. Blacked-out C-pillars are definitely an eclectic touch. LED taillights pour down the XJ’s elegantly simple, tapered tail, adorned only with a chrome Leaper. 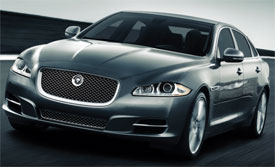 The mid-size XF’s potent trio of 5.0-liter direct-injected V8s provides plenty of go for the larger XJ as well. Base unit is naturally aspirated with 385 horsepower and 380 pound-feet of torque. The Supercharged XJ’s belt-driven breathing is good for a stout 470 horses and 424 pound-feet.

The special-order Supersport adds the 510-horsepower eight from the XFR. The only transmission, a six-speed automatic, presses the hockey puck-JaguarDrive Selector into your palm at startup. There are also wheel-mounted paddle shifters, and driver selectable Dynamic mode that holds gears longer while also firming up the suspension and seat belts!

With a mean growl, our 385-horse XJ leaped from 0 to 60 in 5.8 seconds, and raced through the quarter mile in 14.3 seconds at 103 miles per hour. It does bog down momentarily at launch. Without that, times would be even faster. Still, results closely match the XF, thanks to the aluminum chassis that allows the XJ to enter the ring some 300 lbs lighter than its rivals.

That chassis is supported by standard air suspension with continuously variable damping. Driving aids include the expected stability and traction control, plus an active rear differential. The combo makes for a supple ride and sublime handling-once you get used to the quick but dead steering, that is. The lack of feedback reminded us of a video game. But, get the hang of it, and this big Jag easily mastered every corner we threw at it. Yes, it rolls a bit, but overall it is well balanced and unflappable.

But you always know what the brakes are doing. An initial soft pedal is followed by good bite. A 131 foot average coming down from 60 could be shorter, but stability is excellent and the experience is far smoother than most rivals. 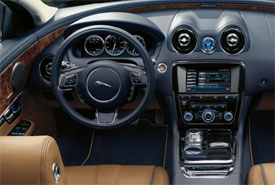 And, no rival can match the way Jaguar dresses its interiors. Wood veneer rings a spacious, amazingly well equipped cabin, whose low-slung leather dash is shrink-wrapped around nautical-style vents.

Classic round gauges reside in a virtual world, as a driver-focused 12.3-inch display fades up at startup, highlights critical data, and tints red in ‘Dynamic’ mode.

A center eight-inch Dual View touch screen allows the driver and front passenger to view two different visuals at the same time. It fits right below a classic analog timepiece.

Very modern is the standard panoramic glass roof. There’s ample storage, including Jaguar’s one-touch opening glovebox, and very usable cupholders in the center console. In the rear, leather covers the seats, door panels, and even the headliner is suede cloth. While there is plenty of room, long wheelbase models expand it to limousine proportions. The Jaguar’s 18.4 cubic feet of trunk volume is decent, though less than Mercedes’ S-Class.

Government Fuel Economy for our XJ are 16 city/23 highway on premium fuel.  We hit a respectable 20.0 miles per gallon in real world driving. The new XJ has a base price of $72,500, which makes Jag’s flagship a segment bargain. The supercharger adds $15,000 more, with the SuperSport in six figures. On all, the long wheelbase tacks on a few grand additional.

The 2011 Jaguar XJ bridges the gap between two eras beautifully. Never once do classic inspirations and eclectic touches mar the totally modern outcome in the slightest. With extroverted style and performance aplenty, Jaguar’s big cat roars into the 21st century with its claws out.