The 2011 Kia Optima Hybrid may be the brands first hybrid, but the driveline architecture is courtesy of the recently introduced Hyundai Sonata hybrid, which means it’s a full hybrid and can be driven in electric-only mode, or gasoline engine mode, or any combination of the two at speeds up to 62 miles-per-hour. And that also means it gets the same Government Fuel Economy Ratings of 35-City and 40-highway. We managed a very good 38.2 miles per gallon of regular grade gas. The Kia Optima Hybrid furthers its role as a good citizen with an impressive energy impact score of 9.3 barrels of oil consumed per year. And a very low carbon footprint of 5.1 annual tons of CO2 emitted.

The Optima Hybrid is powered by the same 2.4-liter I4 as the base car, only it’s been modified to run on a more efficient Atkinson cycle. Horsepower is 166, and torque is 154 lb-ft. Add in 30 kilowatts of power from the electric motor and combined system output is 206-horsepower and 195 lb-ft. of torque. Unlike most hybrids, the Optima retains a true 6-speed, geared automatic transmission, and not a CVT. Kudos for that!

Unfortunately, even with that 6-Speed, it felt pretty breathless off the line at our test track. Once the gas engine gets cranking and catches up with the electric motor, both RPM and power build slowly. Shifts are very slow and smooth, which can pretty much sum up the whole straight-line experience, as the Optima Hybrid lumbers to 60 in 9.4-seconds, and reaches the end of the quarter mile in 17.1-seconds at 83 miles-per-hour. 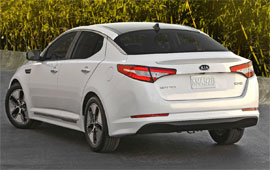 So, it’s not a performance hybrid, but it is one you can live with on a daily basis. For the most part, the hybrid system is unobtrusive. Occasionally you can feel a brief shudder on the gas/electric transitions; and we did notice that the auto stop/start didn’t seem to engage as often, or as early as other hybrids. However, compared to the Sonata Hybrid, the Optima is a much better handler, though it’s still not in sport sedan territory. The ride is more compliant when cruising the back roads, and very quiet and comfy on the highway.

Driven more aggressively, understeer and hard tires makes for a less than thrilling experience, but the car is light on its feet, weighing in at less than 3,500 pounds. The electric power steering has good weight to it, but response is on the slow side.  A rear multi-link independent suspension, with anti-roll bars front and rear, keeps body roll subdued, but does little to alleviate an overall soft feel. Four wheel ABS disc brakes with Active Hydraulic Boost brought this Hybrid down to a stop in a longish 137-feet. Further indications that this Optima does quite live up to its sporty styling.

And, thankfully, that styling differs little from the great looking standard Optima. But there are a few unique elements like a new grille with active shutters, as well as aerodynamic bumper lowers front and rear… LED tail lights… rear lip spoiler… side sills… and re-designed side mirrors. Ride height has been lowered by 2-tenths of an inch, which not only improves aerodynamics, but furthers this car’s very modern appearance that looks good from just about any angle. 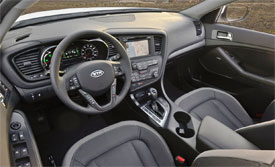 Inside, you’ll find a driver centered dash that is more European than Asian. Material quality is very good, and all controls are well placed. An available Hybrid Premium Technology Package adds power seat adjustments for both front occupants, heated and cooled seat ventilation, heated steering wheel and rear seats, Navigation, and back-up camera. The navigation screen also has an ECO Dynamics screen to keep you updated on the hybrid systems workings. The air conditioning system is electrically driven, so interior temperatures remains consistent regardless of whether you are driving in gas or electric mode. Rear seat passengers will enjoy plenty of space, but seats are a little on the hard side.

Pricing for the 2011 Kia Optima Hybrid begins at $27,250, which is about $75-hundred over a base Optima, but about the same as the turbo-charged Optima SX that we tested only a few months ago. So, the Optima Hybrid may be just one more offering in Kia’s rapidly expanding lineup, but it is an important one. It shows the brand’s commitment to not only making great looking, affordable cars; but high-tech, high-mileage hybrids as well.

The most important thing we have noticed about our 2013 Kia Optima EX Hybrid is…nothing…out of the ordinary that is. Yes, you do feel the hybrid drive when it mixes gas and electric, and standing outside the car there is a hum at idle, but frankly, after a short while you forget about both.

Mainly, we admit, because of the excellent fuel economy. After three months and 6,000 miles on the odometer, we’re at 39.8 miles per gallon of Regular. That compares to the mid to high twenties for the standard Optima. Plus, it’s in one of the roomiest mid-size sedans you can buy.

We also like the way the Optima drives; sportier than most rivals including its sister the Hyundai Sonata. There’s plenty of power, and road manners rivals sportier European sedans.

Admittedly the $4,500 price jump for an Optima Hybrid will take years to recoup. Still, for a true five adult sedan, the Kia Optima Hybrid makes a responsible addition to the family fleet.

Another sedan that we think breaks from the mold for mid-size family cars is the Kia Optima.

And, we like it for many of the same reasons we like the Mazda6. Plus, one more. It’s available with a very effective, if pricey, gasoline-electric hybrid powertrain.

So far, after 5 months and some 7600 miles, our EX Hybrid is managing a great 37.1 miles per gallon of regular in mostly commuter use. Transitions between gasoline and electric are smooth and mostly invisible.

Best of all, the Euro-flavored styling, interior design, and most of the driving dynamics, come through the hybrid conversion without compromise.

If automakers can continue to reduce hybrid prices, cars like our Kia EX Hybrid will become the rule rather than the exception.

Gasoline electric hybrids are no longer a curiosity as most mainstream brands have one or more in their lineup. Such is the case as they are increasingly marketed as “just another” engine option on already fine family cars like our long term Kia Optima.

We’ve been a fan of the mid-size Optima from the start, And, even at 9,600 miles, its hybrid drive just makes the Optima’s Euro-spec style and driving response that much more appealing.

In fact, we almost take it’s near 35 miles per gallon of regular fuel economy for granted along with the excellent reliability and long distance comfort of our EX model.

After 6 months of daily usage, some interior materials are starting to show wear. But, nothing unexpected. The nav-system is among the easiest to use out there.

While higher sticker prices still hamper hybrid sales, one day this technology could become not just the smartest choice, but the most popular one as well.

We’ve notice no changes in starting or normal operation. Interior heat seems to build just fine. Granted, electric batteries don’t hold their charge as well in the cold. But, with a nearly steady average of 34.2 miles per gallon of regular gas, after 8 months and 13,300 miles, we can’t complain.

Most also love the way it drives, with a sporty feel that we now expect from every Kia. Some interior fabrics are showing wear, and not everyone likes the low seating position, but most of our crew finds the Optima Hybrid a family sedan that provides the trifecta of style, driving enjoyment, and economy.

The unusually nasty weather also took a toll on the fuel economy of our 2013 Kia Optima EX Hybrid. Our average of 33.2 miles per gallon of regular is the lowest since we took delivery some 10 months back.

Still, it remains a high water mark for a mid-size car of any stripe.

The odometer has clicked passed 14,400 miles with no mechanical faults, or for that matter, notable negative comments from our staff.

They love the Optima’s Euro-spec exterior and interior design, it’s roomy almost luxurious cabin, and great ride. The overall feel is sporty, yet those soft springs combined with hard tires encourage you to keep your aggressive driving habits in check.

Still, if you want to aggressively tackle family car fuel economy costs, the Kia Optima Hybrid is a winner.

When we took delivery of this 2013 Kia Optima EX Hybrid a year ago, we didn’t expect that this mid-size, gasoline-electric would have to suffer through the longest, coldest winter in recent memory.

But, it did, with a hybrid-ish average of 34.0 miles per gallon on regular. While slightly less than its government sticker, it was still a solid 20% better than our long term non-hybrid Hyundai Sonata.

The Optima got a real workout around the Baltimore-Washington area, seeing much more downtown time than country cruising. Still, after 16,000 dirty miles, there was no down time. Transitions between gasoline and electric remained mostly invisible.

Some interior fabrics wore faster than expected, but a very easy to use Nav system made up for it.

We really think Kia is on the right track producing family sedans that exude character. And, despite a big price bump for a hybrid powertrain, we think the Optima truly deserves its name.

We’ve ended our year with a Kia Optima EX Hybrid, and it was a real eye opener as to the current state of fuel saving gasoline-electric technology.

Over 17,236 miles we averaged 33.6 miles per gallon of regular. That’s 10% less than the Combined government rating of 37, but about what owners say they are experiencing. Plus, that’s 25% better than the standard Optima. Is it worth the $4,500 price premium? That depends on your state of mind. But, we loved having a very roomy, long distance family sedan that hates stopping for gas.

We had no mechanical faults. We did observe a rapid wear of interior fabrics, however.

On the plus side we loved the Optima’s Euro-design, EX trim’s near luxury appointments, great NAV system, and overall sporty driving feel. More tire grip is our only want there.

If pure MPGs are your thing, you can certainly go the Prius route. But, hybrid versions of well rounded, roomy mid-size sedans, like the Optima, are the future. And, in Kia’s case, they’re ahead of the curve.