Ever since the brash Cayenne utility hit dealers in 2003, Porsche purists have been understandably uneasy, and with the arrival of the front-engine, four-door Panacea earlier this year, perhaps more so now than ever. But the new Boxster Spyder should be reassuring. With bare bones styling from the iconic 550 Spyder, it’s a 100% classic, but modern, Porsche.

The Boxster’s basic sports car shape is becoming iconic in its own right, but the 2011 Porsche Boxster Spyder cranks it up a notch. Carrera GT-style twin-hump fairings aft of padded roll bars replace the Boxster’s simple deckled. A nicely done stoplight bridges the gap between the fairings.

And for even more fun, a Spartan two-piece manual soft-top gives the Boxster Spyder a definite ‘50s speedster look. And those vintage rocker panel stripes, especially on our sleek black tester, are easily as cool as the ones you get on the 911 GT3 RS. The stripes connect lightweight 19-inch alloy wheels that are unique to the Boxster Spyder.

The Spyder’s front fascia gets only a subtle freshening from the regular Boxster. While, out back, there’s a fixed spoiler and rear fascia borrowed from the Boxster S. But the Boxster sits 8/10ths of an inch lower than the S, and is 176 pounds lighter. Without the power top, and with new aluminum doors and trunk lid, the Spyder is the lightest of current Porsches.

Top down reveals much of the same cozy two-seat cockpit we’ve come to expect in a Boxster. But a closer look reveals red seatbelts, and more weight saving details like GT3RS-style pull-strap door releases, doors stripped of their storage bins, and a gauge cluster stripped of its shroud.

Seriously track-ready Alcan Tara-trimmed, well-bolstered bucket seats prove more comfortable than they have any right to be. Radio and cupholders are no-cost options, but you’ll have to pay for the privilege of A/C. Like any Boxster, there’s meager trunk space split front and rear, displacing 9.9 cubic feet, total.

The sole engine is a direct-injected 3.4-liter horizontally opposed six borrowed from the tintop Cayman S. Output is the same, at 320 horsepower and 273 pound-feet of torque. And we’ve gotta say, the Spyder’s exhaust note is pitch-perfect.

A six-speed manual transaxle is standard, but Porsche’s excellent seven-speed dual-clutch PDK automatic is a worthy, quick-shifting alternative. Both transmit power through a mechanical locking differential.

Running through our manual Spyder’s precise ratios at the track resulted in a 5.1-second sprint to 60. That’s the same as the last Boxster S we tested.  A result we blame on our tester’s heavy option list. But the quarter mile arrived quickerâ€”13.5 seconds at 106 miles per hour, even with an unavoidable last-minute shift into fourth gear.

The Spyder was much happier in the slalom. The Boxster’s mid-engined layout allows near perfect 50/50 front-to-rear weight distribution, and the Spyder adds to that a lower center of gravity, not to mention tires pumped to a lower PSI for more grip. The high-speed lane change couldn’t faze this chop-top Boxster, either. Inputs and outputs were near-telepathic. The Spyder is the best handling production Porsche we’ve ever driven. 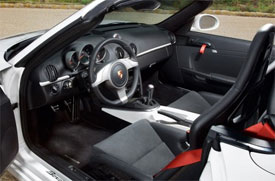 Braking was also impressive, with stops from 60 averaging a concise 113 feet with firm, short pedal travel and very little nosedive. Credit for all the fade-free stopping goes to our Spyder’s large rotors and four piston calipers.

The Boxster Spyder’s short, stiff springs, anti-roll bars, and dampers tuned to near bone-jarring levels of sportiness never let you forget that this car is most at home on the track.

Government fuel economy ratings for the Boxster Spyder are as good or better than its less focused Boxster stablemates.  The automatic rates 20 mpg city/29 highway, while the manual rates 19 city/27 highway. We averaged a respectable 23.9 miles per gallon on premium gas.

Including destination, the 2011 Porsche Boxster Spyder starts at $62,150. That’s four grand more than the much better equipped S. But then the Spyder is much rarer.

So, less car, but more performance, and more head turning, for more money. That’s the Porsche way, and we can’t help coming back for more. Plus, the 2011 Porsche Boxster Spyder is a total reassurance that Porsche is still committed to building true, and cozy, sports cars.