With its 2012 re-design, the Focus compact has become Ford’s core global program. Focus is already generating offspring, including small vans, a high performance hatchback, and this car – the Ford Focus Electric. It’s actually one of only several new plug-ins and hybrids due from the blue oval this year. So let’s go for a drive in the EV Focus and see if this green approach means greener pastures for Ford.

At first glance, the 2012 Ford Focus Electric doesn’t look that much different than the compact, front-wheel drive, European-designed five-door hatchback on which it is clearly based. And that means it appears more mainstream, and dare we say “normal”, than the Nissan Leaf and Chevrolet Volt, and that’s just fine by us.

But, there is one difference that causes folks to look at the EV Focus twice. The large, expressive Aston-Martin inspired decorative grille that has more in common with the soon to arrive redesigned Ford Fusion, then with the rest of the Focus lineup. The athletic profile remains the same however, and 17-inch aluminum wheels, pushed well to the corners, are standard. In back, the rear hatch features smallish glass and a big rear spoiler, while large tail lamps bubble out from the fenders.  Green badging is discreet, limited to small logos on the doors and rear hatch.

As to the sophisticated guts of this EV, replacing the Focus 2-liter I4 is a 107kW electric motor rated at 143-horsepower, 184 pound feet of torque. That’s actually 26% more torque than the standard Focus. So, get-up and go feels willing and you can even chirp the tires. We recorded a non-instrumented 0 to 60 time of 9.5 seconds. Top speed is limited to 84 miles-per-hour. Ford claims that a full battery charge on their 240-volt home system is half that of the Nissan Leaf, or as quick as 4-hours. 120 still takes up to 20 hours.

A huge benefit of basing Ford’s first all-electric car on the existing Focus is the fact that it drives very much like the compact we already love. The ride, while comfortable, falls firmly on the sporty side of things, with MacPherson struts up front, and a Control Blade multi-link suspension in the rear. Weight is up almost 700-pounds which gives the Ford Focus a more solid feel, but you really don’t feel it that much through the competent electric power steering gear. The EV Focus is also obviously quieter as well, though does make a pleasant “whirring sound.” Regenerative braking to help recharge the battery is included, and the performance is a bit grabby, but also very secure. 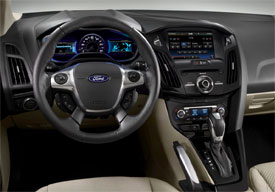 Inside, the basic Focus layout remains and the EV comes very well equipped. Dual-zone automatic climate control, push button start, heated seats, and back-up camera are all standard on the Electric. But, there are also lots of exclusive pieces to complete the EV puzzle. Seats are made of eco-friendly cloth, and there’s a unique version of MyFord Touch. Gauges also feature additional EV info, as well as a useful driver coach to help you not deplete the battery and your electric driving range “budget” any faster than you have to. It turns efficient driving into a bit of a game and lowered our range anxiety.

Batteries are state-of-the-art lithium-ion, 23kWh capacity, and are located in the trunk, which obviously cuts into the usefulness of the storage space, but 60-40 rear seat backs do still fold for longer items, and the 120 Volt charger stores neatly under the floor. While the batteries are a little smaller than those in the Nissan Leaf, Ford was able to eek slightly more range out of them, 76 miles verses 73 on the government cycle. Our car indicated an 84 mile range when fully charged.

Focus Electric Government Fuel Economy Miles Per Gallon Equivalency Ratings are 110-City and 99-Highway, 105-Combined. That too bests the Leaf.  But, the Focus will also cost you more than the Leaf with pricing starting at $39,995. That’s close to the extended range Chevrolet Volt. All prices are before state and federal government tax credits.

We applaud Ford for jumping into the pure EV fight, and for doing so with the Focus. Already a very entertaining compact, now there’s the added bonus of never having to stop for liquid fuel. True, modern electric cars are still in their infancy, and it will be a long while before they become a common sight. Still Ford and other EV carmakers get kudos for taking a risk on new technology. The Ford Focus Electric proves the bet can pay off.