While Jeep fans call it the JK, to most us, it’s just the current generation Jeep Wrangler. This latest redesign dates to the 2007 model year, when both a 2 and new 4-door emerged. Both models soldiered on without notable changes until Fiat gained control of the Chrysler Group. The new management ordered a dramatically upgraded interior for 2011, and for 2012, their efforts to juice up this global icon run all the way to the ground.

That big change is an all-new engine, as under the hood of every 2012 Jeep Wrangler sits Chrysler’s new 3.6-liter Pentastar V6. In the JK, it puts out 285-horsepower and 260 lb-ft. of torque. That’s a huge 83-horsepower jump, with 23 more lb-ft. of torque over last year’s cast iron 3.8-liter. Plus the all-aluminum Pentastar is 90 pounds lighter.

While the 6-speed manual transmission remains the same, the automatic transmission is a new 5-speed. Not only does this new combination increase performance, but fuel economy is up as well. Government Fuel Economy Ratings are 17 city and 21 highway. Rugged off-road gearing keeps numbers low and we managed only 18.6 miles per gallon of Regular in mixed driving.

Indeed, the new automatic transmission has a lower first gear. But, for you rock crawling types that gives you an available 58.9:1 crawl ratio. And, if you don’t know what that means trust us, it’s better.

And indeed the Wrangler continues to shine where it’s most rugged. Our Sahara 4X4 2-door did not include all of the Rubicon’s off-road goodies, but does come with Command-Trac shift-on-the-fly 4-wheel drive, a Dana 44 differential with a 3.21-ratio in the rear, and a Dana 30 up front, skid plates for both the transfer case and fuel tank, and Hill Descent Control. 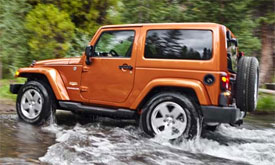 We put all of those elements to the test and found the Wrangler to be the capable Billy Goat Brute that we all know and love. The automatic transmission does less hunting around for the right gear, and fortunately the manual control is a true manual control, as it doesn’t shift itself if you don’t want it to. We also appreciated the lower first gear which makes it feel much torquey-er off the line.

And speaking of off the line, the Pentastar-powered Wrangler is indeed quicker than before. 60 miles-per-hour was reached in 7.8 seconds in our two-door. That’s a full 2 seconds faster than a comparable 3.8 Wrangler. The quarter mile passed in 15.5-seconds at 88-miles-per-hour.

While the high ground clearance makes the Wrangler more fit for rock crawling than cone carving, it handled our slalom course with relative ease as well. There’s still a lot of Jeep roll, but it feels way more responsive than it should. Turn in is very quick, and there’s a huge amount of feedback, despite the soft, off-road ready suspension. Braking chores are handled by 4-wheel ABS disc brakes that brought our Sahara to a stop in a longish 135-feet.

Out on the road, the 2012 Wrangler is certainly the quietest Wrangler ever, especially with the hard top. But, that quietness just allows you to hear things that you didn’t previously notice, like the rear-mounted spare tire pulling on the thin-metal rear gate whenever you go over a bump. Still, the Jeep remains a fun to drive and easy to park daily driver.

There are no changes to the exterior of the 2012 Wrangler. Our Sahara model features body colored fenders as well as the three piece hard top. 18-inch wheels come standard on the Sahara, wrapped in 255/70 off-road ready Bridgestone Duelers. 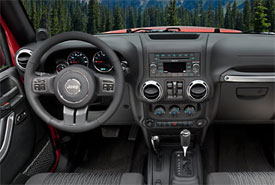 Last year’s interior upgrades included better, softer materials throughout, new switchgear, more sound insulation, larger rear window; and more comfort and convenience features like automatic climate control and heated seats. The rear seat is hard to access, but room is actually not bad once you’re back there. There’s 17.2 cubic feet of cargo room behind the seat. So, while the Wrangler 2-door can, in a pinch, haul a party of four with modest gear, the 4-door Wrangler Unlimited is a true 5-passenger SUV.

While the Jeep Wrangler may not be our first choice for commuting, it would be our first choice for a weekend of off-road adventures. There’s still no other vehicle that offers this much capability at this price point; not to mention the huge aftermarket support that allows you to tailor your Wrangler for your specific needs. And now that the 2012 Jeep Wrangler is packing a great new V6 and automatic transmission, that’s one less area you have to address. So, grab your gear, it’s time to go four wheelin’!