Over a decade and a half ago, when Mercedes-Benz announced that they would not only start building a luxury SUV, but assemble it here in America, most people thought they were crazy. Well, after two generations of setting the pace for luxury utilities, it’s safe to say the Mercedes-Benz M-class has been a success. Now, with an all-new third gen ML, Mercedes is addressing a few areas they felt still needed improvement.

One key area that the 2012 Mercedes-Benz ML350 addresses most notably is the interior. While it has come a long way since that first 1998 M-Class, the ML’s interior has always been more C-Class useful than S-class posh. So, a big priority was to bring the new digs up to snuff. How did they do?

Well, the overall quality of materials is greatly improved. Fit and finish, an early bone of contention, is also solidly up a big notch. There’s slightly less interior room than before, but the cabin seems brighter, with an airier feel, even at night where soft ambient lighting prevails. Seats are initially rock hard, but prove to be very comfortable after extended use. The Mercedes COMAND system, including controls for the radio, still leaves us more frustrated than satisfied. There’s no reason why dialing a specific radio station can’t be intuitive. Climate controls however, are much easier to figure out, and the ML heats up quickly on chilly mornings.

Rear seat room is plentiful for two, doable for three and the seats are very comfortable; there’s no third-row option. Storage capacity behind those rear seats is up to 36.2-cubic feet, while maximum cargo capacity with seat backs folded is actually down a tad to 71-cubic feet. The cargo area is finished exceptionally well, and we love that the power lift gate has a very bright red button for easy operating at night.

On the road, the ML has an extremely solid ride; it’s quite a comfortable place to spend some quality time with the family, or your golf buddies. It does feel very heavy, and indeed, like most of us, it has put on some weight over last year, tipping the scales now at just over 5,000 pounds. It’s also impressively quiet inside, likely the quietest in this class and very maneuverable in tight spaces.

Our ML350 BlueTec sported the optional 3-liter Turbocharged diesel V6. Horsepower comes in at 240, but torque is a massive 455 lb-feet.  That’s enough to tow 7,200-pounds. The engine does still require Urea injection, but the tank filler is now out of the trunk and located behind the fuel door. A manual mode 7-speed automatic transmission, complete with flicky column shifter, is standard.

The diesel’s massive torque certainly helped us spring to a 0-60 time of just 7.1 seconds. 4matic all-wheel-drive provides plenty of grip off the line. With the barest amount of turbo lag, our diesel likes to rev, as it made its way to the end of the quarter mile in 15.4-seconds at 89 miles-per-hour. Handling feels very solid and composed, more like a top heavy S-class than an SUV. New active anti-roll bars are part of the Dynamic Handling Package and can stiffen to reduce roll, or loosen to allow individual wheel articulation. 4Matic is a full-time system so it too aids cornering and it works seamlessly. Stops from 60 were rock solid at a short 120-feet. The pedal is firm with good feedback. 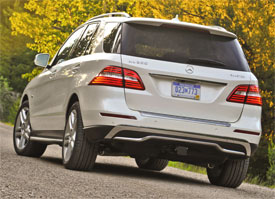 The 2012 ML’s styling has only mildly evolved from previous generations; though it does look less like a minivan than before. Sleek and sophisticated is the general theme, and our ML’s optional 20-inch alloys certainly help. Overall length is up nearly an inch while height is down almost an inch.

Government Fuel Economy Ratings for our ML350 BlueTEC diesel are 20-City and 27-Highway. We managed 24 miles-per-gallon in mixed driving. While those numbers are good for a current SUV, quite honestly, we expected better with the diesel. Still, it is 20 percent more economical than the base gasoline V6. Our diesel’s Energy Impact Score is fairly high at 17.9 Barrels of Oil consumed per year, with a Carbon Footprint of 9.6 annual tons of CO2.

Pricing for the latest M-Class starts at $49,865. But, since the ML350 BlueTec diesel stickers for barely more at $51,365, it is easily our current choice. V8 and rear drive models are also due. As Mercedes-Benz M-class sales have held up well despite the recession, the all-new 2012 ML is more of a progression than an upheaval.