With the economy still struggling to come around, more than just the car industry has taken a hit. Recent college grads are entering the real world and having a hard time finding a job, buying a home, or a car. Well, Nissan has just launched an all-new, and very affordable Versa to give those young alumni a place to start. But is the Versa ready for the rat race?

When the Nissan Versa was introduced in 2006 it was touted as a new low priced car with plenty of room inside. Well, today those needs are greater than ever as more people need a spacious car at a reasonable price. And, the 2012 Nissan Versa four-door is one such daily driver. 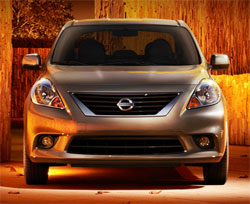 Built on Nissan’s new V for Versatile platform, this Versa is just slightly shorter than before. The Versa sedan competes with subcompacts like the Yaris and Fiesta but actually fits in the larger compact class. Height is lowered by more than an inch, providing a bit more style and an overall smoother shape that begins with a new Nissan family chrome surround single port grille. Large bubble-like headlights sit atop optional deep set fog lamps. One place that cost is saved is by the smallish 15-inch steel wheels with plastic hupcaps. The rear is tall but nicely sculpted for an economy car, using wrap around hockey stick taillights to again make this Versa look less utilitarian.

The original Versa was among the best cars for getting a lot of interior room out of a little exterior. The new Versa, even more so. Our mid-level SV’s all-black bucket seats were all-day comfortable with plenty of leg room. The rest of the interior may have been made in Beverly Hills because all-too-obvious plastic abounds. Plastic doors panels, plastic dash, plastic everything. Including on the hood that covers a compact but very readable gauge cluster. 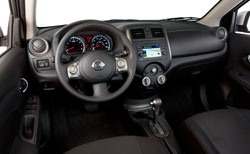 Controls are large and all manual. But, the Versa is reasonably equipped. A/C is standard as is an AM/FM/CD radio with auxiliary input. With the high end Tech Package, the center stack adds a 5” inch touch screen, iPod connectivity, satellite radio, and Bluetooth. The last two with redundant controls on the steering wheel. The Versa also comes equipped with both side and curtain airbags. The back seat is also again quite roomy with real adult head and leg room. But, the seat back is fixed on all but the top SL trim. Trunk space grows a full cubic foot from last year to a very useful 14.8.

At the other end, is a new 1.6-liter twin-cam four cylinder that replaces both last year’s 1.6 and 1.8 engines. Output is lower than either at 109 horsepower and 107 lb-ft of torque. Transmissions include a 5-speed manual and our car’s much improved CVT automatic. That, plus about 150 pounds less weight than before, results in higher Government Fuel Economy Ratings of 30-City and 38-Highway on regular. Expect 33 in everyday driving.

The downside of all this economy is usually track performance. Indeed, the Versa took its time, jogging from 0-60 in 10.7 seconds. That’s over a second slower than the previous 1.8 Versa. The quarter mile was also economy car slow at 18.1 seconds and 80 miles an hour.  The Versa was breathless off the line, with barely enough power for a nice Sunday stroll. But surprise, through the cones, the Versa proved very responsive.  Turn-ins were immediate, even though there was lots of body roll. Still, control is very good with better than expected tire grip. There also was a lot of nose dive when stopping. And, longish 136-foot halts from 60 from the ABS-equipped front disc and rear drum brakes. The pedal feels disconnected and at first, there was mild vibration. On normal roads, however, the Versa does just fine. You don’t have enough power to dart in and out of traffic, but the roomy interior and smooth ride made it a most comfortable commuter car. Plus, when you get where you’re going, a small 34.8-foot turning diameter makes it easy to park.

As to that reasonable price we mentioned. The Nissan Versa S Sedan starts at only $11,750. Yes, that makes the Versa sedan the least expensive car you can buy in America today. The SV automatic starts at $15,320. The Versa Hatchback doesn’t get redesigned until next year.

We always remember our mother’s saying, “You get what you pay for,” and when buying a car that still rings true. The Nissan Versa is a fine, budget-minded people mover. A vehicle able to fit 5 adults in comfort, and get great fuel economy, all for about half the cost of the typical family sedan, is indeed hard find. However, as motor critics, we admit, it would not be our first choice. Still, for a young 9-to-5 city worker that’s just starting a family, the four-door 2012 Nissan Versa has a lot to offer.