The balance between performance and luxury in a sport sedan is a tricky one. Too much performance and you get a ride that handles track work well, but beats you up on the daily commute. Swing the pendulum the other way and you’ll be wrapped in luxury, but left wanting when it comes to an enjoyable driving experience. But every once in a while a car comes along that gets the cocktail just right. So it’s cheers, to the Audi S6!

We’ve driven more than our fair share of great Audi’s lately, but the 2013 Audi S6 might just be our favorite. And while the European RS6 offers higher performance, the S6 is a much better fit for us, packaging great style and great performance in a sedan that looks and feels right at home just about anywhere.

By now we’re all familiar with Audi’s S formula of packing more power and better handling into sedans, coupes, and now crossovers, throughout their lineup. 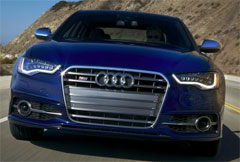 All S6’s are quattro all-wheel-drive with an active rear differential. And like most luxury sport sedans it has selectable driving modes. But, of all Audi’s mid-size S models, this one responds with the most heft. You still sense the abundant power, it just doesn’t feel quite as light on its feet as its kin. But, we are really splitting hairs here.

There is nothing to complain about when it comes to straight-line acceleration. The S6 locks in and destroys the quarter-mile with extreme prejudice. Off the line it’s the typical quattro grip-and-go as you hit 60 in just 3.8-seconds. The 7-speed S tronic keeps the power flowing with quick and smooth shifts, ending the ¼-mile in 12.2-seconds at 114 miles-per-hour. So, maybe the S6 feels heavy like a Saturn V.

Tenacious quattro grip was even more evident through our handling course, as well as super aggressive turn-ins. There was a little more roll than we expected, but in no way did it hinder progress. That’s with the standard adaptive air suspension with a lower ride height than the A6. And in spite of that heavier feel, the S6 actually weighs in less than the S7 at 4,398-pounds. The ventilated brake discs were more than up to the task of hauling all of that weight down, averaging a short 117-feet from 60.

Does performance reach into M5 territory? Not quite but its close enough, keeping that livability balance on a knife’s edge. Even as the most conservative looking S car, we love the “beast-in-a-3-piece” look, or maybe it’s more a 1-percenter on casual Friday.

The sleek, aluminum body panels look poured over the steel structure and the 20-inch alloy wheels that are in place of the standard 19’s. It’s most aggressive up front with its oversized grille and lower fascia that say “look out, we’re comin’ through!” There’s a bit less of the performance style in back, but the trunk-lid spoiler and rear diffuser with doubled-up exhaust tips are a welcome step up over the A6. 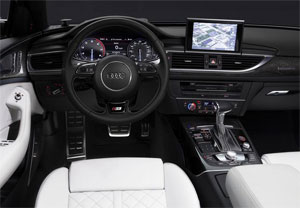 As with most Audi S-machines, long distance comfort is where the S6 really impresses, with a classy and stylish interior that still embraces functionality. And the S6 is also “right there”. We’ve said it before, but it bears repeating; of the German big-3, Audi has got the interior nailed down the most. We quite fond of the MMI central control interface and most everything seems placed in a “just right” manner that is both intuitive and practical, except maybe for the climate controls down low on the center stack. We’re fans of the seats as well, both for the diamond stitched look, and great comfort and support that they provide.

Government Fuel Economy Ratings are 17-City, 27-Highway, and 20-Combined. We used Premium fuel to get a very good average of 23.1 miles-per-gallon. The Energy Impact Score is only average however, at 16.5-barrels of yearly oil use with CO2 emissions of 7.3-tons.

At $72,795 the S6 is not cheap, but we all know the finer things in life rarely are. And after driving it back and forth to work every day you definitely will not feel ripped off.

The 2013 Audi S6 is the real sleeper in the Audi S lineup and maybe not for everyone. If it’s a dominate performance image your ego needs, you’ll be better served with the S7, or wait for the truly pricey RS7. But to us, the S6’s intoxicating blend of doing everything perfectly is the winning formula right now.