While we’ve gotten our hands on quite a few exotic cars over the years; Ferraris, Lambos, McLarens; it’s quite a list. But, there’s always one that seemed to get away. Well no longer. We’ve finally nabbed a Bugatti Veyron. And while driving a car with 1200-horsepower might be considered an insane proposition, we’d be crazy if we didn’t go for it!

The 2013 Bugatti Veyron 16.4 Grand Sport Vitesse may have one of the car world’s longest names ever; but with that prolonged nomenclature, you’ll also get a car that is, without a doubt, the fastest production roadster of our time. 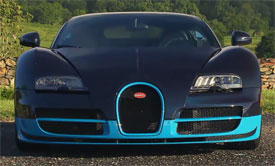 So, where to begin!?!  Well, I guess we should start with the one thing that makes it all possible, an 8.0-liter W16 engine under the cowl. 1,200-horsepower is more than a vast majority of race cars and plenty of juice to get you going in a hurry. The 1,106 lb-ft. of torque heading to all 4 wheels helps as well.

And as vicious as the engine sounds under acceleration, it sounds even cooler when you lift, as you get a nice howl from the turbos as they calm down and thank you for taking it easy on them.

The Vitesse has 199-more horsepower than your garden variety Veyron Grand Sport, and the increase comes mainly from larger turbos; 4 of them, spinning up over 20 psi of boost, weaving exhaust gas into magic. Even with extensive use of lightweight materials, the Veyron still weighs in at 4,387-pounds, but somehow it feels more like a Boxster than a Bentley when you’re driving it.

10-second ¼ miles in a street car is pretty insane, and our brief time behind the wheel didn’t allow for us to hit the track for instrumented runs to confirm that claim, or its 0-60 of just 2.6-seconds, but we did lay down a few hard launches to get a taste and found it to be incredibly surefooted, even on wet pavement, thanks to the help of the all-wheel-drive system.

Transmission is a 7-speed dual clutch DSG that’s been beefed up to handle the serious muscle of the W16.

Disappointingly, or maybe thankfully depending on how you look at it, we didn’t even sniff the limits of the Veyron on our outing…we simply ran out of road. That’s because top speed is 255 miles-per-hour, at which time you’ll go through tires as well as a full tank of fuel in a matter of minutes.

With great power comes great responsibility, or maybe in this case great responsiveness, as no matter the speed, driving the Veyron is a very surreal experience with immediate reaction to your every input. And since most drivers feel more comfortable with a bit of understeer, Bugatti engineers dialed just a little in. The suspension offers 3-modes of ride height: Standard, Handling, and Top Speed.

In addition to the added power, Vitesse models get some exterior mods. There are big scoops on the engine cover to provide additional air, and the front end dons larger openings for cooling drivetrain components. Our car’s blue-tinted clear coat carbon fiber and blue paint job wouldn’t exactly be our color combo of choice, but it’s not like you’ll blend in regardless of the pigment that’s been applied.

There are aero enhancements galore, with some electronically activated at speed; and behind the 20-inch wheels are 15-inch brake rotors, the size of standard wheels on many cars just a few short years ago.

Like everything else about this car, the interior is out of this world, and only provides seating for two. But you and that lucky, possibly frightened, passenger will get to enjoy plenty of luxury features.

But that’s not what this car is all about; and all of the visible carbon fiber, aluminum, and even magnesium are visual reinforcements that the primary mission of this machine is maximum velocity. The Grand Sport Vitesse also has exclusive trim work that puts it above and beyond the Grand Sport, and that includes unique seats. 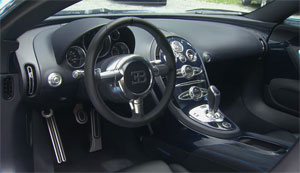 Bugatti is also proud of the fact that the Vitesse Government Fuel Economy Ratings of 8-City, 15-Highway, and 10-Combined, are the same as the less powerful Grand Sport.

As for pricing, this Veyron will set you back a cool $2.5 million. No we’re not kidding. And, since Bugattis are built to order, your price may vary, providing you can even figure out where to buy one, as like many dangerous substances you have to know the right people to make a purchase.

What more can we say, really. The 2013 Bugatti Veyron 16.4 Grand Sport Vitesse truly is the ultimate supercar, with a price tag to match. Driving one is the rarest of the rare experiences, and briefly had us contemplating what crimes we could get away with in order to acquire the necessary cash to buy one. And that my friends, is what driving a Veyron will do to you.