There’s no denying that the Chevrolet Camaro ZL1 was a huge leap in performance over the Camaro SS. So big in fact, that there was plenty of room in between for a car that picks up a lot of ZL1’s performance, but for a price that’s closer to a street smart SS. And that’s what this Camaro SS 1LE is all about. So let’s hit some high speed turns and see if this “tweener” is ready to be the “boss”.

The best thing about the Camaro’s return has been watching GM go toe to toe with the Ford Mustang once again, and this 2013 Chevrolet Camaro 1LE is aimed squarely at the blue oval’s Mustang BOSS 302. 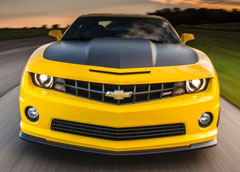 Technically, the 1LE is not a new Camaro model, but is a performance package that can be added to any Camaro coupe, as long as it’s an SS, with manual transmission. Most updates are strictly aimed at improving on track performance, many of them straight from the ultimate Camaro, the ZL1.

It’s primarily a handling package, as horsepower from the SS’s 6.2-liter LS3 V8 remains the same at 426, and torque output stays at 420 lb-ft. What does change is a 3.91 rear end gearing, closer ratios for the TR6060 6-speed trans, monotube rear dampers, larger front stabilizer bar, a strut tower brace, and the ZL1’s 20-inch wheels wearing Good Year Eagle F1 Supercar G’s. The end result is significantly flatter handling. And all of that additional cornering grip required beefing up most of the rear end suspension components and updating the fuel tank with additional pickups, all straight from the ZL1.

Lest it get confused with more pedestrian SS fare, the 1LE package also comes with some exterior enhancements to set it apart, sort of taking the BOSS Mustang’s flat black approach, with the darkness applied to the hood, front splitter, and rear deck-lid spoiler. It’s hard to believe it’s only been 3 years since the Camaro arrived back on the scene as the retro-meets-modern design has held up very well to our eyes. 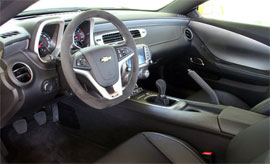 And as before, the heritage theme continues inside; as do, unfortunately, the less than stellar materials. But the 1LE package will get you the ZL1’s flat-bottom steering wheel and short throw shifter, both covered in sueded-microfiber material. Shifter feel is much improved, and we really enjoyed rowing through the gears whether between corners on the track, or down the straight, a ¼ mile at the time.

On the rest of Roebling Road Raceway’s high speed asphalt, the 1LE felt much more aggressive on turn in, providing an almost immediate response to any steering input. There is still some roll, but not enough to upset chassis balance, and there’s serious power for coming off corners, with awe-inspiring sound to accompany it. Standard SS brakes are Brembos, and they continue to impress, though we did experience some fade after 3 long days of abuse.

Overall, the 1LE package is not a dramatic change for the Camaro, but a very nice tightening; it still doesn’t have the light and nimble feel of the BOSS, but the set-up is spot on and this Camaro just hammers its way through corners without a hint of losing composure. And the available head-up display allows you to monitor your vitals without taking your eyes of the track, or the road.

In addition, there are some system-wide Camaro updates for 2013, but they are relatively minor. The SS gets electric power steering and an available dual-mode exhaust system; Hill Start Assist is now standard on all manual equipped cars. And there’s also some minor interior trim updates, and Chevrolet’s MyLink touch screen navigation system is now available.

Government Fuel Economy Ratings for a manual equipped SS Camaro are 16-City, 24-Highway, and 19-Combined. Which makes the Energy Impact Score fittingly for a muscle car low, burning up 17.3-barrels of oil yearly while spitting 7.9 tons of CO2 into the atmosphere.

But, the 1LE doesn’t go quite as far in transforming the 2013 Chevrolet Camaro SS as the Boss does to the Ford Mustang GT. In fact, it hasn’t changed its personality at all; it still feels like a Camaro, just a much improved one; one that feels and performs even better on the one place that is the most important in the pony car wars, the track.