You’ve heard us comment that for the first time in decades Detroit automakers are designing bread-and-butter family sedans that just might be real competition for Asian king pins like the Toyota Camry, Honda Accord, and more recently, the Hyundai Sonata. Now of those efforts is the 2013 Chevrolet Malibu - an all-new mid-size four door that could change Malibu’s reputation from rental fleet darling to a family’s best friend.

The 2013 Malibu Eco with GM’s light hybrid eAssist is the first of Chevy’s new mid-size sedans to arrive, and it does in style.

It’s easy to say it’s much better looking than the previous Malibu. But, it also holds up well when compared to its mid-size competitors. It may not be quite as eye catching as the Hyundai Sonata, but it’s certainly on par with the soon to arrive Ford Fusion and clearly one of the better looking family cars available. The new Malibu, as with most new Chevrolet products, has received a little Camaro influence, specifically in the front end treatment, and the tail lights. But, that corporate front and rear also somewhat disguise the freshness of the rest of the body. From a deep chin with a highly sculpted hood to more expressive side panels, its impressive just how different it is from last year’s Malibu. Stance too is more dynamic thanks to a much wider track and broader shoulders. There’s also a tasteful amount of chrome trim, and a well integrated rear deck-lid spoiler. 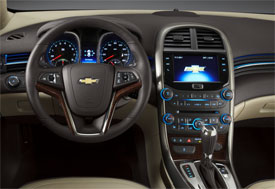 The newness is much more noticeable inside. The dash wraps nicely into the doors with a pronounced twin cockpit theme. Textures and stitching are interesting, and while our staff was divided on the horizontal slats, they agree that that the end result looks expensive. As the dash is fairly busy, your first impression is that controls will be confusing. Yet, everything is where you expect it to be and very simple to operate. The large Chevrolet MyLink touch screen with voice activation is wonderfully uncomplicated, and we love the storage nook that’s hidden behind it.  Auxiliary inputs are conveniently located in the center console.

Despite a four and a half inch shorter wheelbase, most interior measurements are up. Front seats are wide, supportive, and comfortable, and you can feel the additional room in the cockpit, which is almost 3-inches wider.  Rear seats are also comfortable, with over two inches of added hip and shoulder room, so just like the Buick Regal and LaCrosse that share the same chassis, there’s more room in Malibu than first appears.  The trunk is finished nicely, with large pockets for the old-school hinges.  Space is compromised by the eAssist battery, but there’s still a handy pass through. Other Malibu’s get traditional split folding rear seats.

As you pass through traffic, the Malibu rewards you with a very competent and amazingly quiet ride. The eAssist auto stop/start system works almost invisibly, and we continue to be impressed with the overall system which consists of a 2.4-liter Ecotec I4 engine rated at 182-horsepower and 172 pound feet of torque, and a 15-kW electric motor-generator that adds 15-additional horsepower and 79 pound feet of torque.

Handling is not quite as exciting as some rivals, but it certainly feels more substantial than the previous Malibu. Transmission is a 6-speed automatic and we like the location of the manual mode toggle, on top of the shifter, and it works well. We put it to good use at out test track with a 0-60 sprint of a leisurely 8.4-seconds, about the same as the LaCrosse eAssist we tested earlier, with the ¼ mile completed in 16.6-seconds at 84 miles per hour. 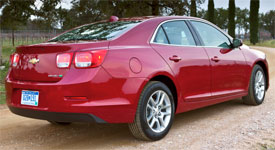 But the performance that we’re most interested in is the Government Fuel Economy Ratings. With lots of aerodynamic help including active grille shutters, the Malibu Eco rates 25-City and 37-Highway. We averaged a quite good 33.1 miles-per-gallon of regular giving the Malibu Eco a fairly low Energy Impact Score of 11.4-barrels of annual oil consumption and emissions of 5.1 tons of CO2 per year. Base price for the Malibu Eco is $25,995, but you can load it up with premium audio, navigation, remote start, and leather seating and still come in under $30,000. And, a non eAssist 197-horsepower 2.5-liter Malibu comes next. Like Sonata, there will be no V-6 option.

The 2013 Chevrolet Malibu is more than just the eight generation of a fabled nameplate. With this car, GM is back in the mid-size family sedan game with stylish looks, an upscale interior, and fine fuel economy. While the Eco’s MPG ratings are not quite full hybrid-level, it also doesn’t come with a big price penalty. We think the Malibu is another good step for GM, and a good choice for American families.