We always get a little nervous when we hear a classic car name making a return, especially when it’s attached to a small car. Well, the name is Dodge Dart, and it’s on Chrysler’s new Alfa Romeo-based compact. But, for those of you that don’t have fond memories of the original, the new Dart looks to be packing lots of high style and high tech features. So, let’s see if the Dart is another bulls-eye for Chrysler.

With the help of Fiat, Chrysler Group has been on a roll since emerging from bankruptcy. But, one thing that’s been missing from their line-up for nearly a decade is a viable compact sedan. Well, the 2013 Dodge Dart is a compact sedan and our first impression is that it’s way more than just viable.

Styling is certainly fresh, as the Dart joins the Hyundai Elantra as one of the most dynamic looking sedans in its segment. With its wide front end, and upsweeping side lines the Dart has a very athletic appearance, like a sprinter at the starting block. Sheet metal is taut and it indeed looks very European.

There is still the trademark Dodge crosshair grille, but it’s small and flat, with the front end more dominated by the large lower air opening. And, as is all the rage these days, active grille shutters are present, as is a full underbody aero treatment. The rear end is dominated by the Charger-inspired “racetrack” ring of LED’s, which unfortunately don’t come with all models, nor does dual exhaust. Under the Dart’s sharply creased hood, lies one of three engine choices ranging from the 1.4-liter turbo from the Fiat 500 Abarth to 2 and 2.4-liter normally aspirated I4’s. 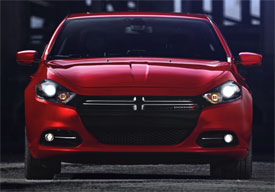 We’ve tried both the 1.4 and the 2-liter, and the 1.4 turbo is easily the more entertaining choice, even though it’s not as peppy here as in the much lighter Abarth. The exhaust is also muted although it still burps and pops like a classic Italian mill. The 2-liter Tigershark I4 is the standard engine on all but the R/T model and puts out the same 160-horsepower as the turbo, but far less torque at 148 pound feet.

But, it was the 1.4 Turbo we took to our track. With the standard 6-speed manual, our 3,200 pound Dart managed a respectable 0-60 run of 8.2-seconds. However, it does feel faster. It takes a second for all 184 pound feet of torque to kick in, but off-the-line grunt is sufficient. Still, the ¼ mile was leisurely at 16.2-seconds and 87 miles-per-hour. A 6-speed Dual Dry Clutch automatic transmission is also available with the 1.4-turbo, while in the 2-liter you can opt for a traditional 6-speed automatic.

As the Dart is based on the Alfa Romeo Giulietta, we were expecting an entertaining trip through the cones, and we weren’t disappointed. This is the first Chrysler product with electric power steering and we found it quick and very well weighted, with a tight feel. There is a nice thick-rimmed steering wheel to play with too. When pushed hard, the Dart’s rear end lightens up just enough to have some fun and scoot through here with ease.

Brakes are a little grabby, but worked well enough to halt the Dart from 60 in a short 126-feet.

The Dart is bigger than the Giulitetta in every exterior dimension, which means plenty of room inside the great looking interior. Most materials are soft to the touch, but there are some lingering hard plastics on the doors and lower dash. There is an unusual pattern for the speaker and defrost grilles. Some like it, others thought it looked cheap. Front seating however, is top notch for a compact, and even back seat riders get deep cushioning and respectable leg room. Headroom is only an issue if you’re over 6-foot tall. 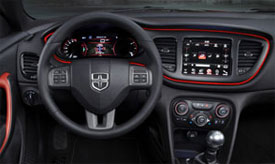 The Dart trumps other compacts with lots of high tech features like a configurable Thin Film Transistor gauge panel, available heated steering wheel and keyless entry, a huge touch screen navigation system and an enormous glove-box, as well as under-seat storage up front. 10-airbags are standard.

On the road, the Dart also reacts solidly for a price-point compact car. Our 1.4 turbo has great Government Fuel Economy Ratings of 27-City and 39-Highway with the manual. We averaged a fine 28 miles-per-gallon of Premium. The 2-liter is a bit less efficient but runs on regular grade. The Energy Impact Score for the 1.4-liter is a fine 10.3-barrels of annual oil consumption with CO2 emissions of 4.6-tons.  Ultimately there will be 5 trim levels of Dart, starting with the SE and a base price of $16,790.

As the first all-new car developed under Fiat leadership and Chrysler’s re-entry into the compact sedan segment, a lot is resting on the 2013 Dodge Dart’s well sculpted shoulders. And it joins the Ford Focus and Chevrolet Cruze as compelling reasons why consumers can finally consider domestic compact cars as true rivals to Civic and Elantra. The 2013 Dodge Dart does indeed hit the bull’s-eye… dead center.