Since MINI’s return to the U.S. market for 2002, they’ve been on a steady mission to infiltrate just about every segment of the motoring world with cars based on the Cooper. Now in its second new generation, 2011 saw their entry into the 5-door crossover ranks with the Countryman. It was the biggest MINI yet. But, for those who loved the concept, but thought the Countryman too bulky looking, comes yet another new model, the MINI Cooper Paceman.

We could sum up our road test of this 2013 MINI Cooper S Paceman by just saying it’s a 2-door version of the Countryman and be done with it. But you tuned in to see more than that, and the truth be told, the Paceman is indeed more than that.

First off, the stance is much lower, as its suspension is positioned more for sporty on road prowess than off road hijinks. Think of it as a crossover coupe designed for a street smart environment. And, even though it share’s the Countryman’s “so ugly it’s cute” bulldog style; to us it’s a better, and yes sportier looking effort. The roof slopes downward a bit more as it reaches the rear hatch, where the back end breaks from MINI tradition by featuring tail lights that are more horizontal than vertical, and by adding large Paceman script. 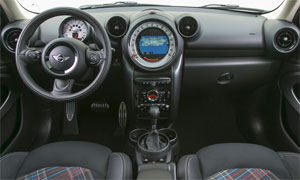 Inside, it also continues MINI’s Willy Wonka-like design theme with the brand’s classic, oversized speedometer centrally located in the dash. In its center is the optional navigation screen, with inputs made on a small console mounted joystick.

Unless you actually get in the rear seat of the Paceman, you’ll never believe that there is true room for 4 adults, thanks to MINI’s miracle of packaging. More legroom in back would be nice, but we found all seats to be very comfortable. Behind the rear hatch, luggage capacity is a decent 11.6 cubic-ft, which expands to 38.1 with rear seats folded.

No matter the model, MINI’s have always felt best blasting around back roads. So too the Paceman. But, something is different. Like the Countryman, it has lost some of the daily-drive nimbleness the brand is known for. Maybe it’s the larger size and weight, but it just doesn’t feel as good as we think a MINI should.

Our driver’s also were not impressed with the 6-speed Steptronic automatic transmission, finding it a bit herky-jerky in traffic, making the overall feel of this car the least sporting of any MINI we’ve driven so far. Platforming with the Countryman means that All4 all-wheel-drive is available, but you have to step up to our Cooper S for that. It works seamlessly in conjunction with standard Stability Control to provide additional grip whenever needed. 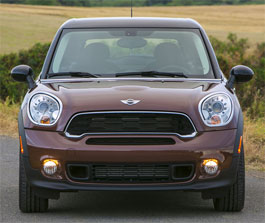 Power comes from a 1.6-liter I4, which in our Cooper S has direct-injection and twin-scroll turbo charging to increase output to 181-horsepower and 177 lb-ft. of torque. Dip into the temporary over-boost function and you’ll have access to 192 lb-ft. of torque. And we used every available amount of boost at our track, but felt the Paceman a bit off the pace, with a less than exhilarating launch and a pokey if steady progression to 60 in 7.7-seconds.

The engine and exhaust are fairly quiet for a sporty car, and the automatic delivered fairly fast shifts on our way to a ¼-mile time of 16.0-seconds at 87 miles-per-hour. All of our staff however, would much prefer the standard 6-speed manual transmission.

While handling was uninspiring on back roads, at the track the Paceman came alive with cone ripping, super aggressive turn-ins, tremendous grip, and plenty of poise. The slightest of steering inputs netted big results, and there was virtually no flexing in the chassis. Brakes are also killer, halting the Paceman’s pace in an average of 109-feet from 60 miles-per-hour. So, the Paceman is really a true MINI Cooper after all.

Government Fuel Economy Ratings for our Cooper S Paceman with automatic and all-wheel-drive are 23-City, 30-Highway, and 26-Combined. We averaged a very good 28.5 miles-per-gallon of Premium in mixed driving.

While it may be easy to label the 2013 MINI Cooper Paceman as just another version of the MINI Cooper and yet another attempt to cram a MINI into every possible automotive niche; the Paceman does have a vibe all its own, with an eye towards those that love the style of the MINI Coupe, but need a little more room and versatility. So instead of Mini finding their way into another automotive category, this small 3-door crossover might be creating a new one all its own.