While just about everyone knows the quirky, little smart Fortwo when they see one, they haven’t exactly set our streets on fire with sales. Less than 10,000 smart cars were sold here last year. Still, Smart thinks the U.S. is a viable market for the smart Electric Drive that’s been on sale in Europe since 2012. So, let’s do some plugging in and see if the all-electric smart just might be the smartest yet?

Our test 2013 Smart Fortwo Electric Drive coupe is actually the 3rd gen of the Smart EV, as it has been part of the smart plan from the beginning. But it’s the first to fully infiltrate the U.S. market. 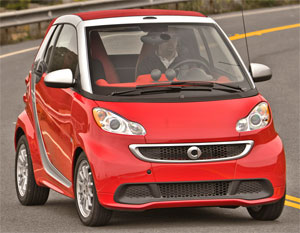 Recent updates that have allowed that to come about are a bigger 17.6-kilowatt hour lithium-ion battery and more powerful 55-kilowatt electric motor. Smart’s 90-mile range claim is right in line with most EVs currently on the market, but thanks to quicker charging of just 3-½ hours to 80% on 240-volts, you can get back on the road sooner, as well as fully charge on 120-current overnight. EPA range estimates are 76-City, 59-Highway, and 68-Combined.

Like all other smart cars, the Electric Drive is highly customizable, with an almost unlimited amount of body panel and interior personalization options.

Like most vehicles that rely on electric current for forward motion, there is a decent amount of torque off the line. And the electric drive is actually quicker to 60 than the standard car at 11.5-seconds; though it doesn’t feel as strong as the Nissan Leaf or Chevrolet Spark EV.

Single speed, direct drive means there’s no transmission, and in that regard, the Electric Drive is actually better than the gasoline-powered smart as its balky transmission has always been one of our major complaints. 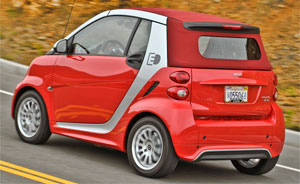 But, the herky-jerky sensations haven’t gone away entirely--they’ve just found their way down to the brake pedal. And no matter how far EVs have progressed recently, at times it can still feel like you’re driving a science project around more than a car.

In regards to actual range, in a 2-week stay at our offices, we never saw more than 52-miles to empty on the range gauge, which at first had us plugging in any chance we got and keeping trips to a minimum--something we didn’t have to do with the Leaf or Spark EV.

But, the more we drove the smart EV, the more we found that gauge to be incredibly pessimistic. After driving 40-50 miles, the power gauge would still show 50% battery life. We weren’t sure which gauge to believe, but there’s definitely enough range for most commutes plus a short side trip or two.

While the smart may have already had the smallest footprint on the road, its carbon shadow has certainly gotten smaller, thanks to Government Fuel Economy Ratings that are a miles-per-gallon equivalent of 122-City, 93-Highway, and 107-Combined, giving it an almost perfect Energy Impact Score of just 0.2-barrels of oil consumed per year with zero CO2 emissions. 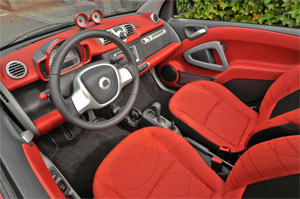 Inside, there are few indicators that there’s a new propulsion system in place, as the same quirky, tiny, and to many, impractical, but not totally claustrophobic, confines persist. There’s plenty of head and leg room for most drivers; but as always, you and your single passenger are sitting very closely together, and not far from the rear bumper.

There’s no loss of interior space in the EV as the electric motor lies below the rear storage area, same as in the gasoline-powered smart, with room above for a surprisingly generous 7.8 cubic-feet of cargo. And the batteries are located beneath the floor in place of the fuel tank.

Another plus is the smart EV’s relatively affordable price, starting at just $25,750, before federal and state tax credits. That not only makes it the cheapest EV around, but for $3,000 more, you can so semi-open air with a Cabrio.

The smart Fortwo Electric Drive has already become the darling of urban rent-by-the-hour car sharing firms. So, it just may be that going EV could be the brand’s salvation in America. We’ve always said the smart Fortwo made some sense as a pure city car and short range commuter. Now that you only have to plug-in to fill up, its appeal just got charged way up.