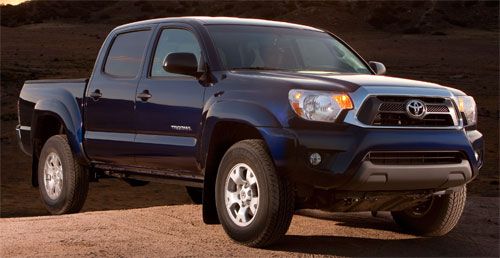 The improving economy has led to a sales boom for pickup trucks. But, that’s for full-size pickups! Despite high gas costs, America's desire for smaller trucks remains weak. Right now, the top seller among downsized pickups is the Toyota Tacoma. But, it hasn't been reengineered in almost a decade! So, let's take a look at the 2013 Tacoma and see if it's still a timely design.

Toyota sold over 140,000 of its mid-size Tacoma pickups last year. That’s nearly three times it's only current competitor, the also aging Nissan Frontier. But, even though Ford has no plans to sell the new Ranger here, GM is bringing back the mid-size Chevrolet Colorado and GMC Canyon next year. So, the Tacoma will soon face some up-to-date competition.

Indeed, our 2013 "Taco" has seen relatively few changes since it was redone for 2005. Though to be fair, the rugged look we praised then never seems to go out of style. 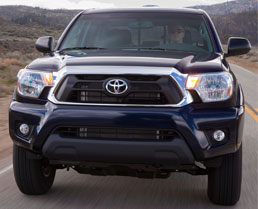 Spend too much time in the seat and you'll realize why big trucks are where it's at. It's hard to get truly comfortable in the compact confines of the Tacoma. The youthful interior is cramped and the seating position is not conducive to long distance comfort.

Our Double Cab's rear cabin was spacious, but the cushions are rock hard. We wouldn't suggest putting anyone back here for a long time either. Regular cab and Access cabs are also available.

New for 2013, is a top of the line Limited trim. It includes a heaping helping of chrome spread to the 18-inch alloys, grille, fog light housings, door handles, side mirrors, and rear bumper. The chrome tube step rails are optional but we found them to be more of a hindrance than help.

Other optional goodies on our tester include the V6 tow package and bed step. We've always been a fan of the Tacoma's composite bed. It's proven to hold up well. If you've seen any of the many 80’s Tacoma's still trucking around with rusted out beds, you'll understand our take. Both 5 and 6-feet bed lengths are available.

Driving back roads, the Tacoma's suspension is old-school stiff, which will certainly appeal to those that like their truck to ride like one. But, most of today's truck buyers are looking for a pickup that has the same ride as the family car.

While a 2.7-liter I4 is standard, many buyers opt for the same 4.0-liter V6 that's been rocking out under the Tacoma’s hood for years. Output is 236–horsepower and 266–pound feet of torque. Its reliability is legendary and as they say, if it ain't broke, don't fix it. On the road it feels powerful and has no problem towing the 6,500 pounds that it's rated for.

Standard with the V6 is a 6–speed manual, though the majority of buyers opt for the 5-speed automatic in our truck. At the track, our V6 auto Tacoma 4X4 completed the 0-60 task in a very respectable 7.8–seconds. Along with lots of power is lot of noise, as it works its way to the end of the quarter mile in 16.1–seconds at 86 miles-per-hour.

Shifts come smooth and confident with an obvious tug accompanying each gear change. However, the old school stiff suspension made for some slow going and an overall pretty poor performance through our slalom course. Even with the 18-inch wheels, there's lots of tire rollover.

Steering is slow to respond; so while many newer full-size pickups have become pretty decent handlers, the Tacoma is still partying like it's 1999. Brake performance was a bit of a throwback as well, with stops averaging an OK 130-feet from 60 but with lots of front end nose dive.

One area the stiff suspension pays off is in being able to conquer some pretty rugged off-road terrain. Tacoma's part-time Hi-Lo 4X4 system is another old-reliable. It may not be a comfortable off-road trek, but this truck does inspire confidence. 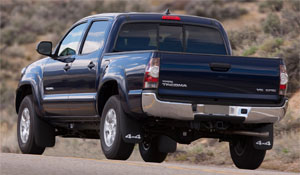 Government Fuel Economy Ratings for our V6 mid-sizer are 16-City, 21-Highway and 18-Combined. That's less than most comparable full-size V6 trucks. For best MPG's in the Tacoma, go with the four-cylinder.

And with the I4, pricing starts at a reasonable $18,470. But, for a V6 equipped like our Limited tester, you're looking at over $37,000. And that high sticker is the best evidence why most people are going full size where you can get a lot more truck for the same money.

We know that an all-new Tacoma is just over the horizon. But, Toyota, and for that matter GM and other truck makers, must prove to consumers that mid-size trucks are a better value than full-size if they hope to ever energize the smaller pickup segment. The Toyota Tacoma is the best of those smaller haulers at the moment; but the clock is ticking fast.