Up until now, Volkswagen’s preferred method of maximizing mileage has with TDI turbocharged diesel engines. But despite wider availability, and ever cleaner exhausts, high diesel fuel prices have stalled their appeal to Americans.  What to do? Well, you could turbocharge a small gasoline engine as many automakers are doing to EcoBoost their mileage, and of course there’s always hybrid powertrains. Well, how about combining the two… in the Jetta! 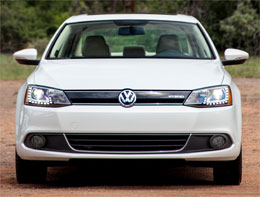 You won’t see turbo in the name, but the 2013 Volkswagen Jetta Hybrid does indeed get down the road with a combination of internal combustion, forced air induction, and electric power. And it all works fairly seamlessly, though you can feel some shudder when the gas engine engages and disengages. It’s not disturbing; just more of a reminder of what exactly is going on.

And, what’s going on is 1.4-liters worth of all-aluminum, direct injected, turbo-charged I4 combined with a 20kW electric motor to output 170-horsepower and 184 lb-ft. of torque. This combo produces Government Fuel Economy Ratings of 42-City, 48-Highway, and 45-Combined. That compares to 34 Combined for the TDI. Still, our lead-footed drivers netted nowhere near the hybrid ratings, averaging just 36.7 miles-per-gallon of Premium. That’s about 5% less than our last Jetta TDI. To be fair, we tested the hybrid in freezing temperatures which required additional gas engine running time so mileage should improve in warmer weather.

No disappointment with the very good Energy Impact Score of 7.3-barrels of oil burned annually with yearly CO2 emissions of 3.3-tons.

And we love almost everything about the Jetta Hybrid, as it is all so well done. The under-hood is pristine and purposeful with little hint of hybrid hardware, save for the orange high voltage cables. Trunk finish is exceptional for a non-luxury compact car; you do lose some cargo space due to the battery, 11.3 cubic-ft. versus 15.5 in a standard Jetta; but you still get fold down rear seatbacks for long item storage. 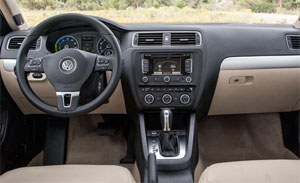 You can follow along with hybrid goings-on with a unique instrument cluster that forgoes the tach for a power gauge with readings for eco, charge, and boost. If you opt for navigation, you can also keep up with the specific hybrid screens and power flow diagrams. And there was good power flowing at the track, as the Hybrid feels every bit as spirited off the line as the standard Jetta and a bit better than the TDI. 0-60 in 8.0-seconds flat. And, that’s still with 40 MPG potential.

The Hybrid comes exclusively with Volkswagen’s 7–speed DSG automatic gearbox and we have no complaints about its very smooth operation or the commanding feel of its shifts as the car worked its way to the end of the ¼-mile in 16.2-seconds at 87 miles-per-hour. The Jetta’s mix of turbo and hybrid boost proved to be a great pairing; you get the e-boost off the line and once you get rolling, the turbo gets spooled up and gives you another. It’s surprising to us that it’s taken this long for such a powertrain to arrive.

When it comes to cone carving, the Jetta is by far at the top of the compact hybrid heap. The independent rear suspension comes straight from the sportier Jetta GLI and makes the Hybrid feel light yet solid, and very sport sedan like. It’s the hybrid you would expect Volkswagen to make. While on the street, the brakes may have a grabby feel because of the regenerative braking, especially at slow speeds, we were more than impressed at the track where we averaged just 119-feet to stop from 60.

The Jetta Hybrid will drive on battery power alone, but due to the small 1.1-kWh size, only for about a mile and only up to 44 miles-per-hour if E-mode is selected. But it is easily the most entertaining full hybrid out there, not so much that you forget it’s a hybrid, but pretty darn close.

You’d be hard pressed to tell by looking at it either, as the Jetta Hybrid is not super flashy looking, and bears little indication of its new eco-friendly credentials. But the details are nice, with the blue-highlighted VW logo and hybrid badging integrated smoothly into the Jetta’s classy and understated design. It also adds a new front fascia with redesigned air inlets, unique 17-inch wheels, and a rear spoiler.

When it comes to pricing, the Jetta Hybrid starts at $25,790. If you’ve been contemplating a hybrid, but non-committal due to not wanting to drive a boring car, well here’s the car you’ve been waiting for. And since you asked, yes Volkswagen will continue to offer the Jetta TDI which is far less well equipped but still cheaper by 2-grand.

Which one is right for you? Well we can’t answer that, but the 2013 Volkswagen Jetta Hybrid is a beautifully done hybrid wrapped in a very tidy package that we would enjoy living with every day. That’s why we picked it as our MotorWeek Drivers’ Choice Best Eco Friendly. And if you were to pick one for yourself, we think it would be just as friendly to you as it is to the environment.