In the rarified world of ultra-high performance Audis, many think the exotic R8 is the champ. But it’s actually the 5-door RS 7 that is the most powerful Audi sold here. That’s right…you don’t need supercar style or impracticality for serious, street-fighting, track melting capabilities. Too good to be true? Well, buckle up!

It took us no time at all to absolutely fall in love with the Audi RS 5 when we hit the track with it last year. But to be honest, that car pales in comparison to this car, the 2014 Audi RS 7.

Building on the far from pedestrian S7, Audi pumps up the performance in just about every area of this vehicle.

Weight has been shaved by 30-pounds. And there’s more power, thanks to Audi cranking up the boost in the twin-turbo 4.0-liter V8 to 17.4 psi. That makes for 560-horsepower and 516 lb-ft. of torque. Quattro all-wheel-drive, along with the S7’s sport differential, and air suspension, are all standard. 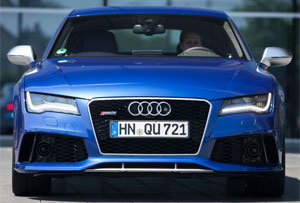 One thing that hasn’t changed, is that much like the S7, this car seems up for just about anything you can throw at it; feeling smooth and steady no matter the speed. Compared to the impressive S7, it cuts through the cones even more effortlessly.  Dynamic driving mode keeps the body roll well under control, but doesn’t necessarily make it feel more responsive.

However, the electromechanical steering is insanely quick on turn-in with a precise, heavy weight, but unsurprisingly little feel. More would be hugely welcomed. The upgraded brakes are great for such a heavy car, but not quite in supercar territory with average stops of 117 feet from 60.

Acceleration, however, is glorious, as there is a ridiculous amount of torque and quattro traction propelling you on an 11.7-second adrenaline rush through the quarter-mile at 123 miles-per-hour. The transmission is a straight-up 8-speed Tiptronic automatic, not a DSG, but it works better than most dual clutch boxes, so we have no complaints.

The first two gears seem ultra-low…that’s for acceleration, getting you to 60 in just 3.6-seconds while the top gears go into extreme overdrive. Manual shifting is hard to get just right on the power sweet spots, so just let the computers and accelerometers do their thing and propel you to glory.

Now if you’re on the highway and you choose to nail the throttle to its fullest, make sure you’re not even close to someone’s bumper, or you’ll be in it in no time as this thing just flat take off. So, it’s quicker than a BMW M6 Gran Coupe, but not quite as fast as the Mercedes-Benz CLS63 AMG. But perhaps more importantly, thanks to cylinder deactivation among other things, it out fuel misers both of them.

Government Fuel Economy Ratings are 16-City, 27-Highway, and 19-Combined. So, our average of 22.1 miles-per-gallon of Premium is quite good for supercar-like performance.

This vehicle is clearly made for eating up mass quantities of Autobahn miles at thrilling speeds in extreme serenity, as Audi seems to be in competition with themselves on building the most amazing interiors. No one else is really even in the game, as here the custom-crafted environment gets even better. 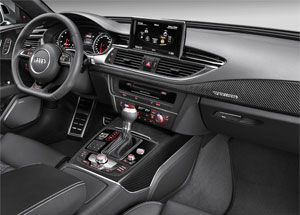 It looks and feels like those super expensive pieces of custom luggage you see that cost well into 5-figures. RS extras include shifter, steering wheel, carbon-fiber trim, unique door handles, and instrument panel.

Front seats are just great, very racy feeling yet also luxurious to the hilt. While it doesn’t feel, or look particularly big, ease into the rear seats and the car feels huge.

Instead of a one size fits all approach to the exterior design, buyers can opt for standard, matte aluminum, or carbon styling. This example sports the matte aluminum look along with new bumpers, revised Singleframe grille, adaptive rear spoiler, lower diffuser, and big elliptical taillight tips for the highly recommended optional sport exhaust system. Full LED lighting is standard.

But let’s be honest. At $105,795, the $25,000 price leap over an S7 may purely be for bragging rights. Most owners will never experience the full potential of this car. We really don’t have the appropriate roads in North America to fully exploit the RS 7’s capabilities. You do need the German Autobahn, or at least, your own track day for that.

We thought the S7 was terrific. But in creating the 2014 RS 7, the otherworldly Audi engineers are again on point. Too good to be true? Not hardly. Overkill? You’re darn right!