The 4 Series is a new line for BMW. Or is it? You might think it’s just a new name for the old 3 Series coupe to bring it in line with the brand’s latest-odd numbers for four-doors, even for two doors-naming scheme. But in changing the name, BMW says that they also changed their mainstay coupe into a different and better car. So let’s hit the track and find out if that is indeed the case!

Even before the 2014 BMW 4 Series Coupe and new number scheme were announced, the carmaker had been taking strides to make the 3 Series Coupe more specialized then the sedan. Think: even numbers fun for 2. Odd numbers, fun and comfort for the whole family. So, the new 4 Series was born.

And indeed, as we found in the BMW 435i we tested, the 4 appears and appeals more differently than the 3. Far more like a 6 Series on a diet.

From the traditional BMW face, all lines point more dramatically rearward, widening as they go. There’s an overall lowered stance highlighted by the 19-inch M-sport alloy wheels that, on our car, take the place of the standard 18’s. Dual exhaust tips project great sounds at start up, and even better ones at wide open throttle.

Well, okay it’s not all unique from the 3 Series sedan; they both do share the same 110.6-inch wheelbase. 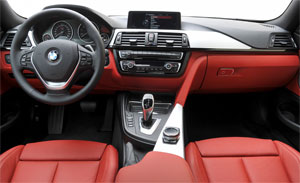 The interior also shows a lot of kinship, but it’s not just between 4 and 3, but among the whole clan with the familiar upscale but still driver focused layout of all recent BMW’s. There’s less desire to climb into the back seat, of course. But should you find that a necessity, there is adequate enough room for 2 once you get planted.

Powertrains are a copy of the 3 Series; base 428 power comes in the form of a 2.0-liter Twin Power turbo I4, with a turbo I6 motivating our 435 with 300–horsepower and 300 lb-ft. of torque. All-wheel-drive is available with either engine. Government Fuel Economy Ratings for the 435 come in at 22-City, 32-Highway, and 25–Combined.

As for routine driving this rear drive 435i, well, it again feels familiar, thought we perceive with slightly more spring in its step. However, like all modern BMW’s, more luxury has been dialed in as a tiny bit of the feel has been dialed out.

Competition is the Audi A5 and Mercedes-Benz C-Coupe of course, and while they are all great handlers and despite its lack of feel, the 4 remains the most capable of the bunch.

But, the proof of being separated at birth came as we did roundy-rounds at Roebling Road Raceway. Our 435 had a noticeably more serious personality than the 4-cylinder 328 sedan that we had here last year.

Is it the additional power, the suspension tweaks, the grippier tires? Well, yes all of that.

But the most significant thing to us, is the suspension tuning. While there is still some roll in corners, and a bit of a bloated feel that we complained about in the latest 3 Series, there is no clumsiness to be found anywhere in the 4.

Power delivery is very smooth as is the whole car, as we found ourselves going a little too hard into corners at times, lost in the tranquility of motion this car provides. No worries. There’s more grip here than you think.

If track days are in your forecast, make sure to opt for the M Sport Suspension and Brake packages, as they really liven up the whole car. Add the Dynamic Handling Package, then turn the DSC off and let the good times roll.

Outside of the lack of steering feel that seems to plague every recent BMW we’ve driven lately; we have no major complaints other than maybe having to wait another few months to drive the M4.

BMW continues to make us happy by offering a manual as a no cost option, but for some reason, most will opt for the standard 8-speed automatic that is in our test car. But having said that, we found it worked well enough on track to keep our drivers’ complaints to a minimum. 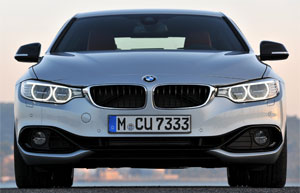 It also works great in a straight line with quick shifts that keep the engine right in the heart of its power band. Our ¼-mile trips took 13.6–seconds at 103 miles-per-hour, with a cold track launch to 60 taking the first 5.1-seconds of that.

So, has the 4 Series progressed far enough from the 3 Series two-door to warrant so much fuss? We think so. The loss of two doors has actually led to a gain in focus on the driving experience. And, that’s why the 2014 BMW 4 Series earned our Drivers’ Choice award for Best Sport Coupe. And why odds are, the new even numbers, will add hits even quicker for BMW.