It might take you a calculator, or at least an abacus or two, to keep up with all of the new BMW “M” models.  But we’re not complaining. We gladly take the opportunity we get behind the wheel of any BMW. And now there’s one more high performer to keep track of, and it’s based on the already lofty 6-series gran coupe.

What do you get when you combine BMW M5 Sedan muscle and M6 Coupe handling with 6-series Gran Coupe style? Well, that’s an easy one, the 2014 BMW M6 Gran Coupe. Yet another M vehicle to emerge from the mad scientists of Dingolfing, Germany. 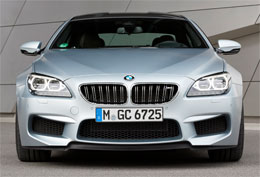 Perhaps their classiest “M” ever, there are of course a few things that set it apart from other 6-series Gran Coupe’s; and they follow the familiar “M” way of doing things, with larger air intakes up front, carbon fiber for the roof, and a wider track with flared out fenders. The rear also gets suitably machoed up with a carbon-fiber diffuser and quad exhaust tips that give you a rumbly reminder of what’s available.

The Gran Coupe rides on the same 116.7-inch wheelbase as the M5 sedan, which is 4½-inches longer than the M6 Coupe. Standard wheels are 20-inch M light alloys. Our test cars Frozen Silver paint will cost you 5-grand extra, but it really looks unique, and you can also upgrade to full LED headlights with the Executive Package.

So in a nutshell, the M6 Gran Coupe is an M5 with a few more curves, and when it comes to hitting some curves, the GC quickly established itself as more than capable.

M engineers put their hands on every aspect of the chassis, transforming it by directly bolting the rear axle subframe to the body for greater stiffness, adding M Dynamic Damper Control shocks, and of course tweaking the electronics, which we still found very intrusive unless they were turned all the way off. Much like the M6, it’s not a lightweight, coming in at over 44-hundred pounds, yet it manages to feel much lighter through the cones with way more quickness than expected in a car this big, all while providing good amounts of feedback.

By now we’re very familiar with the 4.4-liter M twin-turbo V8 under the hood, spinning up 560-horsepower and 500 lb-ft. of torque. Nestled behind, is an M-DCT 7-speed automatic transmission; though a 6-speed manual is available as a no cost option. Put the M-DCT and TwinPower Turbo to work at the track, and under ideal conditions, you’ll manage a 0-60 time of just 3.8-seconds; and go on to a quarter mile run of 12.0-seconds flat at 122 miles-per-hour.

While there’s no shortage of torque off the line, traction can be in short supply. Using M’s launch control helps, but after a few max launches it needs a time out so you’re on your own. Power pours on constantly throughout the trip, with shifts only a minor blip on your high speed radar.

The M-specific brakes are already a step above standard Gran Coupe fare, but you can upgrade further to M Carbon Ceramic brakes.  Our test car had them and brought us to a halt in a short average of 114-feet from 60. 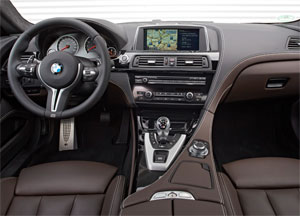 Now let’s us take a time out to look inside where there’s not much “breaking” from traditional BMW driver-centric, cockpit design. You’ll find “M” touches throughout the cabin; including logos, multifunction sport seats, instrument cluster, and of course the steering wheel. Things are a little tighter in the rear seat compared to the M5, and there’s a bit less trunk space, all sacrifice for the more stylish 4-door Coupe design.

And even with all its performance credentials, driving the M6 Gran Coupe is relatively tranquil and relaxing almost regardless of speed. Comfort mode seems more comforting than in the M5, but things can still get plenty aggressive when you dial it up to Sport Plus.

Government Fuel Economy Ratings are in the Gas Guzzler realm at 14-City, 20-Highway, and 16-Combined, which we came close to matching at 16.4 miles-per-gallon of Premium.

When it comes to pricing, numbers pop from low to high, as you’ll need $115,925 to enter the world of M6 Gran Coupedom.

At that level, the 2014 BMW M6 Gran Coupe is clearly one exclusive high performance ride. Still, for the money, we prefer the more traditional M5. But, if you’d rather have the slick M6 looks, but retain some 4-door practicality, then you won’t be disappointed with the M6 Gran Coupe. It’s ready to rock and roll when you are.