The new gen Camaro which debuted for 2010 has certainly been an unqualified success, quickly topping the Ford Mustang in sales, and bringing about a whole new round of pony car wars. Well, 4 years have passed, and the Camaro was due for some updates. And unless you’ve been hiding under a rock, you know that there is an all-new Mustang just around the corner. Let’s see if the 2014 Camaro’s updates will be enough to stave off the ‘Stang!

Whether the 2015 Ford Mustang will launch the blue oval back to the top of the pony car segment remains to be seen. But the 2014 Chevrolet Camaro SS 1LE is a preemptive strike aimed to keep the Bowtie brigade in the number 1 sales spot.

Actually, all Camaros receive updates for 2014; and as before, the 1LE package adds some extra track-worthy spice for those that value handling above all else. 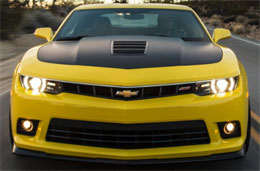 But even with all of the updates and the Camaro’s all-independent suspension, we still had trouble getting the rear tires to properly hookup at launch. We’ll blame the cold track temperatures, sure, but don’t forget about that substantial power flow coming from the front end.

But, here’s where it has changed. Ripping through cones is even more like child’s play for this 1LE. Steering is quick and the car is ultra-responsive as it darts in and out with just the tiniest bit of understeer. Braking performance is also top notch, with no fade, and a light pedal producing short stops from 60 of 109-feet.

Once stopped we were reminded how we still love the looks of the newest gen Camaro. Yet, we still think the new tail lights are a slight turn for the worse. The diffuser below and exhaust tips are also new and more acceptable. 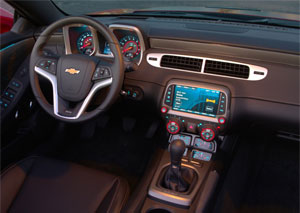 As is the front fascia, with updated headlights, and different takes on the DRLs depending on trim level. Halo ring LEDs come with the RS package. And all SS Camaro’s don a new, more aggressive hood thanks to ZL1-style venting.

The 1LE adds more new exterior elements with it as well, primarily a front splitter, the expected matte black treatment for the hood, and a unique rear spoiler.

Despite some tinkering, the interior still lacks modern ergonomics. There’s too much of a “classic” layout, hard plastics and all. There is plenty of room inside, but the sports car low seats mean you do fall in or climb out. There’s sueded-microfiber material on the flat-bottom steering wheel and shifter; and while it looks cool, some of our staff had reservations about the feel and longevity. A color head-up display is also new, and Recaro seats are now available on any SS.

While not a handful to drive, you also are never fully relaxed while driving the 1LE. Oversteer is always a possibility with lots of torque on tap even in higher gears. The very precise steering helps mightily when corrections need to be made. All of this is what we call personality. And truth be told, we wouldn’t have it any other way. 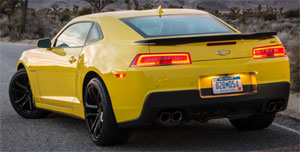 Government Fuel Economy Ratings fall at 16-City, 24-Highway, and 19-Combined; and our mixed driving average comes in at 18.1 miles-per-gallon of Regular.

While base Camaro pricing starts at just $24,550, an SS 1LE will cost you at least $37,550. Our particular piece of American muscle topped out at $46,680. For that kind of loot, we’d just go ahead and save up a little longer for a base Stingray.

Yes, the 2014 Chevrolet Camaro SS 1LE has not only that upcoming all-new Mustang to contend with, but the Corvette as well. Here’s hoping the Camaro gets its own Stingray-style makeover soon. That might be just what it takes to keep the Camaro on top.