F40, F50, Enzo, these are names of Ferraris that immediately have us lusting. Now, add another one to the list… LaFerrari. A car so epic in scape and magnificence that no other name is needed other than simply “the Ferrari”. Only 499 of these mechanical masterpieces will be built, and they’ve long since been spoken for. But, we have this one, the ultimate Ferrari, here just for you, now!

Ferrari’s 2014 LaFerrari, may have gone to the extreme in simplifying its name, but that’s just the start of the extremism in this hyper ride. And does it really even need a name? A single look, you know it’s a Ferrari, and a special one.

Production cars that have approached the 4-figure horsepower threshold are few and far between. LaFerrari joins this rarefied group, and it does so in a truly modern fashion with a hybrid electric drivetrain, the first road-going hybrid from the Prancing Horse. 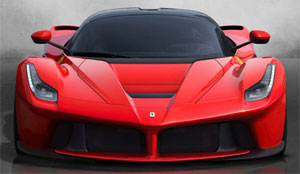 Yes, it’s basically a road-going version of the KERS system found in Ferrari’s Formula 1 cars, here dubbed HY-KERS; and yes it puts out more power than the F1 car.

Coupled with the electric motor, is the F1 7-speed dual-clutch gearbox. The column-mounted shifters are now larger and more ergonomic in design. Energy is stored in 8 separate battery modules strategically positioned throughout the car and assembled by Ferrari’s Scuderia racing department.

Batteries get a charge from the brakes and from the engine whenever it is producing more torque than is needed.

Even with all of the batteries, curb weight is not much over 3,000-lbs. as there are 4 different types of carbon-fiber in play. And since all of the power producing parts are located towards the back of the car, 59% of that weight lies over the rear wheels. 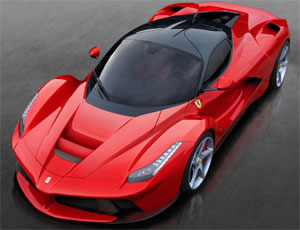 You would have to hate all things automotive to not lust after this car; and after driving it, the infatuation only increases.

How it comes to look so different, yet so familiar is a master stroke of design. The manipulation of air is taken to increased levels even for a supercar. The basic race car-like shape provides extreme levels of downforce on its own, but once you start moving, there are all sorts of spoilers and wings directing air around, over, and through things.

Proportions are very similar to the Enzo, though seating position is more than 2-inches lower. Front wheels are 19’s, rear’s are 20, and carbon ceramic brakes by Brembo lie just behind.

Doors swing up, revealing an all business carbon fiber intensive tub. Climbing in is actually relatively easy and somewhat disappointingly familiar, as much of the switchgear looks similar to other recent street going Ferrari’s. 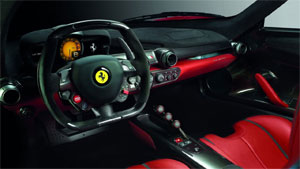 There are no seat adjustments; as the seat itself is integrated into the chassis tub. But adjustments can be made to the steering wheel and pedals. Gauges are displayed on a configurable, fully-digital instrument panel.

In addition to all of the hybrid hardware there are plenty of electronic and mechanical driving aids in place. So you might think that it would be a non-threatening driving experience… and you’d be wrong. Forget about the price tag, this thing feels like a real race car, and not a car you want to be threading your way through heavy traffic in.

It feels super lightweight and while engine power lies in the upper ranges, don’t forget this is a hybrid, so the eboost helps a lot at lower rpms.

You truly feel a part of the car, which you almost are thanks to the integrated seat. Ferrari has mastered the magic of making you feel in total control, even though you know you’re not. It feels like a racecar because basically it is, assembled by the same people who bolt together Formula 1 cars for a living. 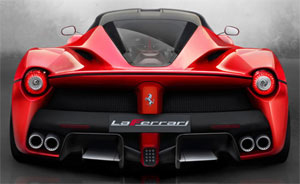 There’s not much point in discussing pricing as all 499 models were spoken for before production even began, but for comparison sake, this ultra-exclusive ride would cost you 1.4-million.

The 2014 LaFerrari, is truly befitting of the name, as it is now The Ferrari to have. It fully encapsulates a history of great Ferrari’s yet points to the future and where the brand is heading, by offering both the most performance and the best efficiency of any Ferrari produced. So, if you’ve ever dreamed about driving a race car every day, well now perhaps you can. Only don’t even think about trying to get your hands on this one.