Despite being the first big player in the hybrid game with their Insight, Honda’s less than focused approach let hybrid superiority slip to the Toyota brand. One of Honda’s misfires was the original Accord Hybrid. A hybrid that oddly favored power over MPGs. Well, now there’s a new Accord Hybrid that is so efficient, it rivals the market leading Prius. So let’s see if Honda’s aim this time is on target.

Make no mistake, the 2014 Accord Hybrid, built in Ohio, is aiming for mass market appeal and a much larger impact than any fuel-sipping Accord before it. It all starts with a fresh hybrid approach. No longer the IMA system, the Accord Hybrid bares a new 2-motor hybrid electric CVT powertrain. Called i-MMD, it follows the Chevrolet Volt in using an electric motor to actually drive the front wheels most of the time, getting electrical power from a gasoline generator, which is called the “second” motor. 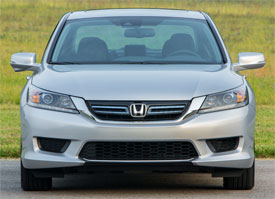 Honda’s two-motor approach does come with a weight penalty as the Hybrid weighs almost 300 pounds more than a standard Accord sedan automatic. The hybrid hardware’s extra poundage is tempered by a new aluminum sub-frame and rear bumper beam. With close to 16-gallons of fuel capacity you can stretch the hybrid’s refueling stops to over 650 miles.

Only at medium to high speeds operation is there a mechanical link that allows the car to run on gasoline power alone. So far the two-motor unit is identical to the Accord Plug-in Hybrid. However, the Accord Hybrid has a much smaller 1.3kWh lithium-ion battery, and cannot be plugged in to recharge.

There is an EV Drive mode for very slow speeds, and range is fairly limited. That’s similar to the Prius.

Some cars pull of the hybrid transformation better than others, and the Accord is about as undetectable as you can get at highways speeds, though you can sense a little drivetrain switcheroo, when darting about town.

The gas burning generator part of the equation is a 2.0-liter I4 that outputs 141-horsepower and 122 lb-ft. of torque. Add in the 124kW of electric motor power and total powertrain productivity comes in at 196-horsepower.

And while not a hot rod by any means, together they deliver a surprisingly sporty attitude. Regenerative braking is smooth in operation except at very low speeds. If more aggressive regen braking is desired, you can engage a braking mode with the gearshift lever. 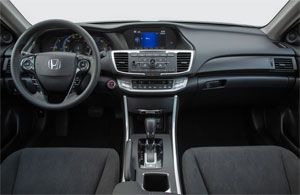 Equally smooth are the upgraded amplitude reactive dampers that help reduce the floaty feel over bumps when driving at highway speeds, and again foster a more sporting feel than other family sized hybrids.

When it comes to exterior styling, the Hybrid’s look is tweaked pretty significantly for a Honda product. There are optional LED headlights, standard blue tinting on the tail lights and grille, 17-inch aero-style alloy wheels, trunk lid spoiler, and a rear diffuser. It’s a look that is more aggressive than “greener”, with only a few classy hybrid badges indicating a more efficient status.

As for interior compromises, there’s 3.1 cubic-ft. less cargo space and no folding rear seatbacks due to battery placement at the front of the trunk.

Like many high efficiency vehicles, there’s electric power steering, water pump, and A/C to help take some of the load off the engine. And, the Accord Hybrid also keeps track of your driving habits and gives you an ECO score.

Government Fuel Economy Ratings come in at 50-City, 45-Highway, 47-Combined. That’s compares to a Combined rating of for 50 for the Toyota Prius, 41 for the Toyota Camry Hybrid, a more direct rival, and 30 for the standard Accord automatic. Naturally, the Energy Impact Score is stellar at 7.0-barrels of annual oil use with CO2 emissions of 3.1-tons.

That’s a lot of numbers. And, there’s others in pricing as the Accord Hybrid costs significantly more than a base 4-cylinder Accord starting at $29,945.

To be fair, the base Hybrid is far better equipped than a base Accord, with Honda’s LaneWatch, push button start, RearView Camera, LED daytime running lights, and side turn signal mirrors as standard. You have to upgrade to EX-L trim for heated seats and Touring level to get navigation where the hybrid premium is a smaller jump.

While it’s doubtful the 2014 Honda Accord Hybrid can stop the Prius juggernaut, it’s good news that Honda finally has a competitive hybrid. Moreover, it’s a car that delivers on its high mileage promises without compromising the immense popularity that the Accord also enjoys. This is indeed one Honda hybrid that looks to be right on target.