When Jeep said it was bringing the Cherokee nameplate back to America, most of the response was positive. But, when photos of the new utility were leaked, that response became an uproar. Jeep fans, it seemed, were less than thrilled with the slick new styling. Fortunately, it does look far better in person. Plus there is a lot to like about the new Cherokee beyond what meets the eye.

For Jeep purists, the 2014 Cherokee is a hard pill to swallow. The squinty lights, fold over grille, and even a wedge-y window profile. And then there is the matter of it being a crossover, derived from a front-wheel drive car! Heresy! 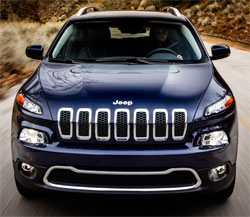 Granted, this Cherokee’s new look may not be as macho as a sleeveless denim jacket; and it’s certainly doesn’t look as purposeful as the original square jawed, 1980’s vintage XJ, but we don’t agree that it’s been hit with an ugly stick.

There are many reasons that a boxy shape was discarded in favor of a slicker design, but aerodynamics is certainly a key one. The new form cuts through the air far more effortlessly, enabling better fuel economy and a quieter ride. And despite the softer lines, the Cherokee still has a nice stance to it.

Its 182-inch overall length puts it in between compact and mid-size SUV’s, but the fact that it shares a platform with the Dodge Dart makes it a compact to us. We’ve heard a lot of complaints about the front lighting with its high-mounted, Nissan Juke-style, slanted daytime running lights drawing most of the ire. Headlights and fog lights are stacked below.

Fortunately, a dedicated Trailhawk model packs what should matter most to Jeep fans; standard four-wheel drive with an off road kit that adds an inch of ground clearance, skid plates, red front tow hooks, and the biggie, a locking rear differential. 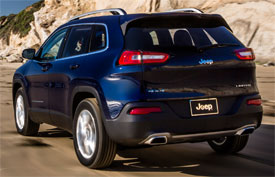 Another debut is Chrysler’s new 9-speed automatic transmission, and it seems to check all the boxes of fuel economy, acceleration, and towing capacity - 4,500-pounds with the V6.

And for those who dare, the new “Trail Rated” Cherokee is capable of some pretty serious off-road terrain. Both front and rear overhangs are minimal for rock climbing; while Jeep Active Drive I single speed, Jeep Active Drive II 2-speed, and Jeep Active Drive Lock with low range all-wheel-drive systems are all available, as is Selec-Terrain from the Grand Cherokee.

Still, for those that hold the old XJs sacred, it is doubtful that any modern Jeep wagon would make them happy. The inconvenient truth is, today’s typical SUV buyer will gladly trade off-road prowess for on-road comfort and capability. Here the new Cherokee really shines.

Ride quality is on par with the best of both compact and mid-size crossovers. But, thanks to the Dart’s original Alpha Romeo roots things are sportier than most.

Inside, there’s seating for 5, with the front seats delivering adequate comfort. Rear seats offer a bit less, but sliding seat bottoms allow extra room for either passengers or cargo. Seat backs fold 60/40 to expand the cargo hold from 24.6 Cubic-ft. to 54.9; and a cargo management system lets you to make the most of the space available. There’s plenty available up front to pamper both driver and occupants from a heated steering wheel and heated and ventilated seats; to a wireless charging pad for mobile devices. 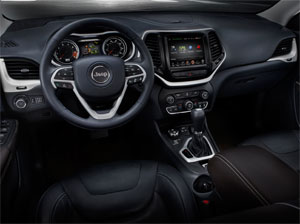 Government Fuel Economy Ratings, aided by the 9-speed transmission, are 21-City, 28-Highway, and 24-Combined for 4-cylinder 4X4’s. Four-wheel-drive V6’s do a little worse, but not by much, at 19-City, 27-Highway, and 22-Combined. Both engines score “average” on the Energy Impact Score with the I4 burning 13.7-barrels of oil yearly while producing 6.2-tons of CO2.

Pricing is also in between compact and mid-size CUV, starting at $23,990 for a front-wheel-drive Sport; where AWD costs 2-grand more. Trailhawk models begin at $30,490.

The old XJ Cherokee is well loved around the world, and it’s doubtful that this one will ever attain such global cult status. Nor is it as capable as the Wrangler. But, so what if it’s not? Jeep already sells a 4-door Wrangler, why do they need two?

And while some might wish Chrysler would have called it something other than Cherokee, we say the name suits it just fine, as just like before, the 2014 Jeep Cherokee is a truly capable choice in the five passenger utility market.