Almost from the moment it arrived here for the 2010 model year, the Kia Soul became one of the brand’s top sellers. Its quirky design, low price, and the cute rodent advertising campaign, quickly made the Soul unforgettable. While aimed at the young, buyers from gen y to baby boomers were drawn to the Soul. Now, there is an all-new second generation Soul. So, let’s see if the 2014 Soul’s mass appeal is intact, or if it’s just grown up and out.

It seems like the Kia Soul has been around for a lot longer than just 4 years. You see them everywhere, no matter what social circle you travel in. But with the 2nd generation 2014 Soul, Kia is looking to see its social standing raised just a bit.

You see, despite originally being aimed at younger buyers, the Soul has proven very popular with mature drivers who found a “Soulmate” in Kia’s roomy bargain box on wheels.

On that point, the new Soul has a much more refined nature. To say the ride quality is greatly improved is an understatement. The chassis is stiffer, and a new subframe, mounted with impact absorbing bushings, and longer travel suspension, smooth things out exponentially. 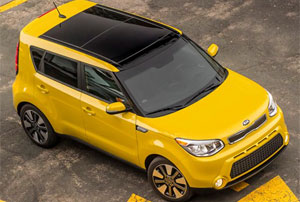 The MacPherson strut front suspension has been further revised by moving the stabilizer bar rearward and the steering box forward. An additional 8/10ths of an inch of wheelbase helps as well, though even after all of that, a minority of our drivers still found the ride to be “bumpy”. All agreed it has gotten much quieter inside and is now a fairly comfortable place to spend daily commute time.

Engines choices are the same as before, but both have been tinkered with. The standard and already lethargic 1.6-liter actually rates less horsepower and torque than last year. The 2.0-liter in our Soul Exclaim adds direct injection for the same 164-horsepower but a small but welcomed boost in torque to 151 lb-ft.

Inside, we were very impressed with the upscale redesign. The bargain bling of the original has given way to a much more welcoming atmosphere. Mature drivers will like the new soft touch materials and the next gen. UVO infotainment system. Happily, Kia did keep a few of the Soul’s original youthful elements like the signature pulsating speaker lights.

But the most important change for all age groups is the improved seat comfort and overall roomier and more useful cabin. Cargo capacity is up to 24.2 cubic-ft. behind the folding rear seatbacks, 61.3 cubic-ft. with them flat. 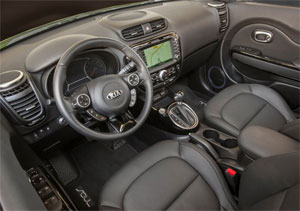 Kia also wisely decided not to tinker too much with the Soul’s unique exterior styling, sticking with the same boxy bulldog shape as before, even though all sheet metal is new. It’s now more rounded, less squared off, and a tad more aggressive thanks to the larger openings up front and a wider stance.

LED positioning lights are standard on Exclaim model, but the HID headlights come as part of the “Whole Shebang Package”. Fenders are still very pronounced and the blacked-out A-pillars give a wraparound visor look to the greenhouse.

Standard wheels are 16-inches, with the Exclaim riding on 18’s. But, you won’t exactly be spinning those wheels off the line too much, as power, even with the 2.0-liter, is adequate at best. Sprints to 60 take a sleepy 8.9–seconds.

The 1.6-liter Soul comes with a 6-speed manual, but a 6-speed automatic transmission is standard with the 2.0. Shifts were soft, and power slow to build on the way to a quarter mile time of 17.0-seconds and 84 miles-per-hour.

But once we started tackling the cones, we began to find some “soul”-ful fun. Despite the more refined ride of the new Soul, handling has also improved. Turn in is quick, and both under and over steer can be found if you go looking. Brake performance is also impressive with consistent stops from 60 averaging a short 118-feet. 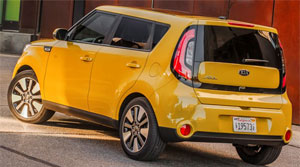 Government Fuel Economy Ratings are little changed. The 2.0-liter rates 23-City, 31-Highway, and 26-Combined. Fortunately even our lead footed drivers were able to achieve 26.8 miles-per-gallon of Regular in a mixed loop of driving. The Energy Impact Score is good at 12.7-barrels of yearly oil usage and 5.6-tons of CO2 emitted.

Even with prices sneaking up just a little, value continues to be a strong selling point; with base Souls starting at $15,695. Mid-level Plus models, at $19,195 and top-of-the-line Exclaims start at $21,295.

The Soul became an unqualified success in a single generation. And after some soul searching of our own, we conclude that the mostly very well executed updates will expand the 2014 Kia Soul’s mass appeal even more.