The battle for supercar supremacy sees its ebbs and flows. But never has it been hotter than it is now with the Porsche 918 Spyder and LaFerrari taking things to new levels. Well McLaren has something to say about it as well, and it hopes to keep those brands chasing the P1.

While McLaren has produced relatively few street cars over the years, their limited runs have become nothing short of legendary. And the 2014 McLaren P1 will undoubtedly join that exceptionally exotic group.

Part Batmobile, part alien invasion pod; the P1 looks like nothing else on the street. And if you’ve got a carbon-fiber fetish, this is certainly your car, with far more parts than not made of the stuff.

The most visible exceptions are the large glass canopy bubble, aluminum 19 and 20-inch wheels, and Pirelli rubber.

It’s hard to quantify just another supercar as a true game changer, but this car certainly is. Whether you’re talking powertrain, acceleration, electronics, or sheer amount of downforce created. It’s a suitable continuation of McLaren’s F1 story. 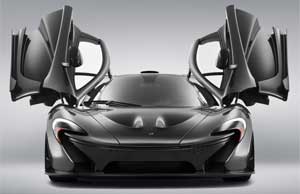 But all supercar stories begin with the powertrain, and right away we see an interesting plot twist. The 727-horsepower, mid-mounted, 3.8-liter twin-turbo V8 doesn’t deviate much from the script, but where the intrigue enters is with an Instant Power Assist System that includes a 176-horspower electric motor of McLaren’s own design, bringing total output to 903-horsepower.

That much horsepower being delivered all at one time, it’s almost insane to even think about the consequences. But trust us; you’ll never forget it once you’ve put the pedal down.

Unlike previous McLaren exotics, the P1 is a modern supercar in every sense of the words. Which means it handles daily driving tasks just as capably as it handles racetracks. Even outward visibility is good. It’s so easy to drive. It makes you think that driving an all-out race car must be just as easy. There’s a 7-speed dual-clutch gearbox and in full auto mode it’s silky smooth.

However, you do need a 400-level college course to really understand how to operate everything, especially the EV power which can be unleashed all at once with a hit of the steering wheel-mounted IPAS button or sporadically like a traditional hybrid, however you see fit. You can even drive in full EV mode if you want, but only for about 6 miles. 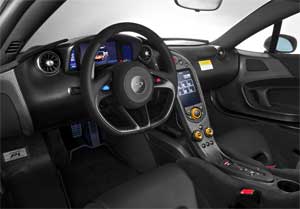 The suspension and brakes are as great as you’re expecting, but the wow factor comes from all of the active aero elements virtually gluing you to the road. The rear wing is in almost constant motion manipulating air to provide either maximum downforce, or minimum drag whichever fits the occasion. The P1 creates the most downforce of any production street car yet.

Unfortunately our short time with the P1 didn’t include any track time, and to be honest it’s a true travesty; because as great as this car is on the street, you know it’s that much better on a closed course. If you are lucky enough to get some track time, McLaren makes it easy as possible for you. Just hit race button and the car instantly transforms itself into an F1 spec. thrill machine.

Weight comes in just over 3,300-pounds, and McLaren kept the P1 rear-drive only, to give it a more neutral feel. Of course nothing feels neutral about sub-3 second 0-60s no matter how many times you experience them.

Inside, things are suitably sparse and business like, with exposed carbon-fiber everywhere. There is no extra sound deadening material, and seat padding is kept to a minimum.

Amazing for a supercar, there’s no gas guzzler tax due to the efficiency of the hybrid powertrain. Government Fuel Economy Ratings are 18-Combined in hybrid mode, 17-Combined in strictly gas mode.

Which means the Energy Impact Score is barely worse than average at 10.8-barrels of oil burned and 7.7 tons of CO2 expelled annually.

Some may think of this road test as a 5-minute McLaren commercial, but hey; all 375 P1s to be built have already been spoken for, so chances are you can’t buy one even if you had $1,150,000 just sitting in your trust fund.

That fairly insane price fits with this car’s rocket sled acceleration, monumental levels of downforce, and ground hugging handling. And, it all works together beautifully to make the 2014 McLaren P1 one superlative supercar.