There’s luxury, and then there’s ultra-luxury. And while everyone certainly thinks luxury when they hear Mercedes-Benz, even the company thought that to go the ultra-luxury route, it would take a different brand. That’s where Maybach came in to play.  But, it’s tough for a little know car marque to get a foothold, even when it’s backed by Mercedes. So, Maybach is again history. But don’t think for a minute that Benz has abandoned their ultra-luxury goals.

From our first moments behind the wheel of the all new S550, it was clear Mercedes-Benz is attempting to elevate S-class’ status enough to actually replace the ultra-exclusive Maybach. So, forget about competing with the 7-Series and A8, the new S-Class now has Bentley and Rolls-Royce in its sights.

And just like those high roller rides, there’s really no end to the list of options you can add in order to make your “S” a one of a kind piece. But Benz is also attempting to match unbridled opulence at a more attainable price.

For starters, the look is pure sophisticated elegance, not showy in any way; more chiseled than before, but with the same upsweeping body lines flowing to more substantial rear shoulders.

As you would expect in a new flagship Mercedes-Benz, new standards for safety are achieved. The technology is known, but now there is seamless integration of driver aides like Steering Assist, Active Lane Keeping Assist, and even a Night Vision system that works so well, you can make an argument for looking at it instead of through the windshield. Though ironically enough, when you need it most, the button to turn it on is nearly impossible to find in the dark. The new S-class also takes the illumination crown, as there are almost 500 LED’s between the exterior and interior; no incandescent bulbs whatsoever. 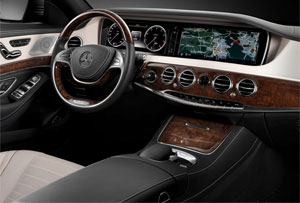 Just one word comes to mind when you first experience the interior environment, and that word is craftsmanship. Build quality is exquisite, and the excellence of materials and upholstery is very remindful of the aforementioned esteemed British marques.

Though all of the electronics and clarity of the navigation screen and virtual gauge panel are far superior and just scream high-end, much more so than in the previous generation S-class. The COMAND central control system is well improved, making a good case for eliminating touch screens altogether; and there are also enough traditional manual controls for most fundamental operations.

Seats and armrests are instantly comforting and soothing; all controls and accoutrements feel rich; the quality of wood and leather is amazing. All-in-all, it’s just a wonderful interior.

Our 4MATIC-equipped tester performed just great on our worn down wintery byways, though the additional heaves and holes in our roads had us wishing it would have been equipped with the optional Magic Body Control that does just what it sounds like; nearly levitating over every bump and road imperfection with the true sense of a magic carpet ride, with apologies to Steppenwolf.

The unique part of the “Magic” system is that instead of reacting to wheel movements, it uses cameras to scan the road surface ahead and predict what the suspension is about to deal with and adjusts damping accordingly. Unfortunately, the system is only available in rear-wheel-drive models. 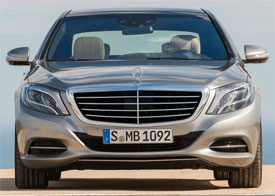 Driving a full-size, high-dollar sedan can be a little intimidating, as not only are you aware of the car’s girth, but you are also very aware of the car’s price tag. But Benz does it’s best to alleviate that anxiety with an insane amount of comfort features, like massaging seats with pillow-like headrests, perfume atomizer, and Burmester Surround Sound audio. Also helping is the fact that it doesn’t feel as heavy as previous S, though it still has that substantial feel that only a German made luxury sedan manages.

Even without “Magic”, our 4Matic never bounced or floated like a Bentley or Rolls, making us want to push it faster and faster. And it has the power to do it. Which we confirmed at the track where we bolted to 60 in just 5.0-seconds, finding the end of the ¼-mile in 13.5-seconds at 108 miles-per-hour.

Making that possible, is a 4.7-liter V8, complete with a pair of turbochargers, cranking out 449-horsepower and 516 lb-ft. of torque. Transmission is a 7-speed automatic.

Government Fuel Economy Ratings for our 4MATIC are 16-City, 26-Highway, and 19-Combined.  We averaged a good 22.3 miles-per-gallon of Premium. The Energy Impact Score comes in fairly high at 17.3-barrels of oil use with 7.6-tons of CO2 emitted annually.

Even with its decidedly more upscale nature, base pricing starts under 6-figures at $93,825. Our extremely well equipped test car was $122,895. That’s not inexpensive, but the new S really does feel like a car that costs twice as much, and a bargain for this level of craftsmanship.

In fact, Mercedes-Benz claims the 2014 S550 is the best automobile in the world. We’re not ready to go anywhere near that far, but it is a pretty spectacular piece of automotive conveyance. It clearly has replaced Maybach, and without a question has become the new benchmark for the “mass produced” premium luxury sedan class.