If you’re a fan of Mercedes-Benz, and more specifically their AMG Performance division, you know that the Black Series label denotes something truly special. Freed of having to make compromises for “on the road comfort,” AMG engineers are able to throw everything they can at a Black car in order to get it around a race track as fast as possible. So this SLS Black sounds like just our kind of car.

The 2014 Mercedes-Benz SLS AMG Black Series is the 5th Black Series model from AMG; and perhaps the most fitting one, as the SLS was an all AMG affair from the get-go. And what have their mechanical wizards been up to? Well, if you’ve ever wondered what AMG could do if they pulled out all the stops, this is it.

Faster in a straight line? Sure! But, really SLS Black is more about turning, stopping, and staying super flat in corners. 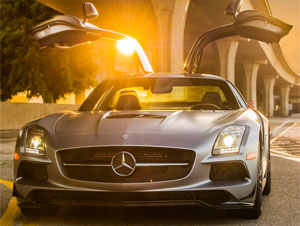 But, let’s start with the SLS’ still normally aspirated 6.2-liter V8. Horsepower bumps up to 622. It revs higher and a lot quicker, which is a good thing as torque is actually down a bit to 468 pound-feet. But, the launch is improved. And, launch it we did, engaging Race Start, nailing the throttle, and letting the SLS rocket to 60 in 3.2-seconds.

There’s a new rear electronic diff. lock with a shorter final drive ratio that helps lower the ¼-mile time to 11.2-seconds at a blistering 128 miles-per-hour. The 7-speed Speedshift DCT transmission doesn’t shift as fast as some supercars, but it still works with snappy precision.

With any car that offers this amount of breathtaking performance, it’s really a waste unless you’re on a proper road course. It almost doesn’t even matter how challenging the track is, just find one. Our track of choice is the 9-turn Roebling Road Raceway near Savannah, Georgia.

And we quickly found this to be the most track-focused, yet still road-going car to ever sport the 3-pointed star. The suspension set up is the same as the original SLS, but just about every part has been replaced or strengthened, making for a remarkably stiffer feel. And while it remains a physically big car, and sometimes feels a bit awkward with the front wheels so far out in front of you; it still reacts with impressive balance.

The immediate response of the steering took us a few laps to get used to. And, you’d better be able to respond quickly yourself, as the Black Series will do whatever you tell it to do, whether it’s the right thing or not. The throttle is also very sensitive, making it hard to sneak up on the car’s limits. All of a sudden, “hey look out, you’re there!”

The same 3-stage anti-skid system remains, but with the increased capabilities of the car it seems much less eager to chime in. The standard 2-piece carbon ceramic brakes are upgraded as well, and worked superbly with great feedback.

Even at first glance, the additional GT3-inspired aerodynamic enhancements of the Black Series are obvious. But, look past the carbon fiber front splitter, sill extensions, rear wing and diffuser, tinted headlights, black tail light surrounds, larger air intakes, and flared fenders, and get under the skin to see just how different Black is over the base SLS.

Over 150-pounds of weight have been shaved thanks to a carbon fiber drive shaft and even a full titanium exhaust system that adds a seriously throaty roar and helps it sound even more like a race car than before. It looks a lot more like one as well, as there’s now much more to this SLS style than just cool gull-wing doors. 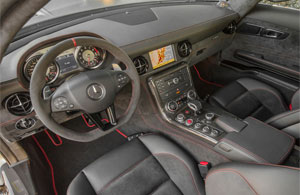 Once you drop into the cockpit, you’ll find the interior like nothing else on the road. Things are still luxury focused, as you’d expect in every Mercedes-Benz, though with a highly functional fighter jet feel. There’s a liberal dose of carbon fiber and plenty of Alcantara leather and red stitching spread about the cabin, along with a great flattened bottom steering wheel.

Government Fuel Economy Ratings take a slight hit, now coming in at 13-City, 17-Highway, and 14-Combined. And that still means a Gas Guzzler Tax and a very poor Energy Impact Score with a hefty 23.5-barrels of oil consumed yearly and CO2 emissions of 10.4-tons.

Plus, as they say, “you’ve got to pay to play”. And if you have the $278,025 necessary to acquire an SLS Black Series, you’ll truly have one of the baddest toys on the playground. You’d better act fast though, as Mercedes-Benz has announced this will be the last year of production of all variants of the SLS AMG.

And with the 2014 Mercedes-Benz SLS AMG Black Series, they are indeed going out with a bang. The engineers at AMG have taken a rich man’s toy and unleashed the real deal supercar that lies beneath. This “new Black” will surely make a statement wherever it arrives.