Amid dwindling sales, vehicle choices, and dealers, industry watchers have predicted the demise of the Mitsubishi brand for years. But, not so fast. Sales are suddenly on the rise with new models like this 7-passenger Outlander utility, and the return of the Mirage sub-compact is imminent. Indeed Mitsubishi is fighting back. So let’s see if the campaign is worth it.

While Mitsubishi’s fate in America isn’t totally resting on the new 2014 Outlander, if it sells respectably well, it will certainly help the cause, keeping the brand relevant as they rebuild their lineup. And if the Outlander is a successful compact crossover, one major reason will be the great layout of the interior. 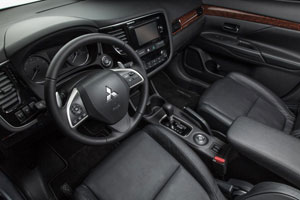 Advanced safety features available include Adaptive Cruise Control with Forward Collision Mitigation and Lane Departure Warning. While one main rival, the Toyota RAV4, has dropped its 3rd row option, the Outlander has seating for 7 standard on all models.

But don’t think this is a compact crossover parading as a mid-sizer. Cargo capacity at 63.3 cubic feet with the 2nd and 3rd rows folded, and 34.2 behind the 2nd row, is less than the RAV4, CR-V, and others. But thanks to a weight loss plan Jenny Craig would be proud of, even with seven seats the Outlander weighs less than 35-hundred pounds; that’s under most competitors; with extensive use of high-tensile strength steel for body panels.

Base powertrain is a 2.4-liter I4 with 166-horsepower and 162 lb-ft. of torque, connected to a CVT powering the front wheels. Our SE included Mitsubishi’s Super All-Wheel Control all-wheel drive, now updated with an ECO mode, brake control system, and electronic power steering control. 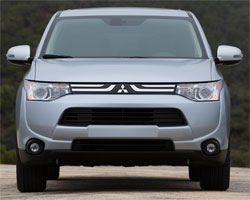 The weight loss and the CVT help deliver Government Fuel Economy Ratings of 24-City, 29-Highway, and 26-Combined. We were spot on at 26.1 miles-per-gallon of Regular.

And unlike most compact rivals, Mitsubishi still has a V6 option, a very sporty 224-horsepower 3.0-liter with a true 6-speed automatic. However, we don’t expect too many buyers to opt for it; and we don’t blame them, as the efficient 4-cylinder gets the job done adequately.

Though, by our clock, just barely. Despite good response off the line, our tester took 10.2-seconds to reach 60, and 17.9-seconds to the end of the quarter mile at 81 miles-per-hour. Handling was better, with good grip and very responsive steering, though we sure could use a little more feel through the wheel.

If there’s one potential hiccup in Mitsubishi’s plan it could be exterior design; as the Outlander’s pseudo-rugged softly rounded style, though aerodynamic, just doesn’t have much punch. Still, it is also a relief from the overly aggressive grilles and facias that dominate today’s crossover field.

Even with that, success for the Outlander won’t be easy, as the small crossover segment is fiercely competitive. But, it’s also a large pie, so the Outlander, being somewhat unique, should be able to cut out a small slice for itself.

With the Outlander, the already well received Outlander Sport, plus the new Mirage small car, Mitsubishi obviously plans on sticking around for a while longer. They’ve even announced a plug-in hybrid Outlander for next year. So, put away the black arm bands, the 2014 Outlander seems proof that Mitsubishi is coming back.

We're approaching 5,000 miles in our 2014 Mitsubishi Outlander Sport…and, three months in, things are all systems go!

Most of us have gotten over the rather basic interior; focusing more on its great utility as a support vehicle…and we’re treating it as such; holding nothing back. Other than a small tear in the seat fabric, though, things are holding up better than expected.

Fuel economy continues to be another bright spot, as many staffers are reporting great numbers on road trips. But thus far, a cold winter, mixed with plenty of daily commuting, has our official combined fuel economy at 24.4 miles per gallon; below the estimated 26.

True to its “Sport” name, the Outlander Sport offers a fairly stiff and rugged ride. A few snowy drives showed us some all-weather versatility, too, from the 148 horsepower 2 liter I4 and CVT combo, paired with Mitsubishi’s fine All-Wheel Control system.

This humble Mitsubishi Outlander Sport is rightfully earning more praise the more time we spend with it.

Nearly four months and 7,000 miles in, the Outlander Sport has seen it all: snow…ice…potholes…weekend projects…and lots of daily commuting. The 148 horsepower 2.0 liter I4, with automatic and all-wheel drive has handled all without a hiccup.

Fuel economy is trending up, now at 25.1 miles per gallon of regular. The government Combined rating of 26 seems doable.

We’ll still nitpick about its no frills interior, but this is coming from folks that hop from Bentleys to BMWs day after day.

Once you truly get to know the Outlander Sport, it’s a comfortable place to unwind and just take care of business.

6 months into our extended stay with the 2014 Mitsubishi Outlander Sport, and we’re approaching 10,000 miles.

With summertime and some easy livin’ finally here, it’s trading in some of its workhorse duties for a little long drive R&R. So, we’ve seen fuel economy rise to 25.4 Combined miles per gallon; inching ever closer to its official rating of 26.

The 148 horsepower 2.0 liter I4 and CVT combo continue to do their thing, with no mechanical issues to report. It may drone on, sure; but the Outlander Sport has proven a reliable and steady trooper in our long term fleet. And we expect things to stay that way until it’s time to go our separate ways.

From the outside, this may look like the same compact ute you’ve seen before, just in a different color, but it’s actually a new model. Say hello to the 2015 Mitsubishi Outlander Sport.

The source of power is also new: a 2.4 liter inline 4, with 168 horsepower – that’s 20 more than our outgoing model. The CVT is still here, as well as All-wheel drive.

And speaking of that outgoing 2014 Outlander, it is leaving us with just over 10,000 miles to our credit, and a final fuel economy of 27.0 Combined on regular. It’s rated for 26.

Our ”Mercury Grey” steed was a real workhorse that never gave us a minute of pause.

We’ve been sporting this 2015 Mitsubishi Outlander Sport for 2 months now, and though it’s as blue as can be, after 2,400 miles it’s got us feeling pretty happy.

And, no it’s not déjà vu all over again; this ’15 is indeed different than our previous Outlander Sport from earlier this year.

Some exterior trim accents, as well as improved material quality inside highlight the aesthetic changes…

…and they continue under the hood, where in GT trim, it gets a bigger and more powerful 2.4 liter I4 engine. 168 horsepower is how it measures up. The extra power is noticeable, and much needed. The CVT is also improved, but still hampers the vehicles full potential.

Fuel economy is starting off on a high note, though, at 29.2 miles per gallon.

So we’re already happy with the direction the Outlander Sport is taking us, and hopefully it keeps the good times rolling.

6,622…that’s our mileage count on this 2015 Mitsubishi Outlander Sport. In the 4 months we’ve had it, our log book is filling with detailed comments.

There’s a general consensus that, while it lacks the fit and finish of rivals like the HR-V and CX-3, the Outlander Sport is a great back-to-basics all-wheel drive utility that is up for whatever. There’s a nice mechanical feel to everything, and switchgear is easy to use.

Fuel economy has dipped, to 26.8 combined MPG…but still that’s above the Combined rating of 24. The 168 horsepower 2.4 liter I4 delivers adequate power, though the CVT really makes you dig into the throttle to access it.

Still, for around-town jaunts, it’s a highly capable little SUV that proves it can hang in with its top dollar rivals, despite lacking the name recognition and flair.

There’s now 7,689 miles to our credit on this 2015 Mitsubishi Outlander Sport, and it’s charging on with little fuss.

The 168 horsepower 2.4 liter I4 certainly doesn’t blow us away when it’s accelerating…in fact the CVT makes it even duller…but there’s plenty to get around town, and it rarely draws complaints.

In fact, any utility that sees fuel economy rising to 27.1 miles per gallon deserves a lot of praise.

And we’re thankful that it’s got all-wheel drive, or as Mitsubishi spins it, “all-wheel control”, because we’re in the midst of autumn, and a possible nasty winter is right around the corner.

And we feel the no-nonsense Outlander Sport will easily hold its own when the going gets tough.

We’ve tacked on 10,623 miles to this 2015 Mitsubishi Outlander Sport in 8 months, and things are still cruising along at a good pace.

The 168 horsepower 2.4 liter I4 is perfect for cruising, as there really isn’t much get up and go beyond that. Still, it’s great around town and perfect for a daily commute.

Our log book still fills up with comments about the “basic” and “cheap” feel of things inside, especially as closely priced rivals have stepped up material quality. But, everything is easy to use, and is holding up well.

Fuel economy is another bright spot, now 26.6 miles per Regular gallon combined. That’s great for any utility. Not having to fill up often means we can stay sheltered from the cold.

Compared to our other long term vehicles, that’s not a lot of distance. You see, the Outlander is not our crew’s first choice for long haul comfort. But for cruising around town, and slicing through daily commutes, regardless of the weather, Outlander Sport is near perfect, doing its chores smoothly and without issue.

The 168 horsepower 2.4 liter I4 is a no fuss-no-muss engine; even if it feels underpowered connected to a CVT. But, again, we had to search for something to complain about. Fuel economy is a crossover winner at 26.6 miles per gallon of regular.

In total, when you’re just trying to get somewhere in one piece, the Outlander Sport is one vehicle that’s happy to oblige any day.

Our compact Mitsubishi Outlander Sport is still cruising along, after 14,600 miles and 10 months with us.

While it doesn’t offer the space of other utilities on our long term lot, the Outlander Sport can still swallow up a decent amount of cargo. Making it a very useful vehicle to have around.

A refresher on the engine: it’s a 2.4 liter I4 rating 168 horsepower. Our gripes with the CVT transmission remain, but it’s not a deal breaker. And fuel economy of 26.9 miles per gallon really scores well with us.

It does indeed live up to the “Sport” in its name…the ride is a little stiff, materials consist mostly of hard plastics, and seats are firm. But the flip side of that coin is having a vehicle that you don’t have to fuss over. If things get dirtied up, it’s just part of the experience. And from what we’ve experienced so far, no mechanical issues means the Outlander Sport can keep on keepin’ on, for many more miles.

This is the second time we’ve said goodbye to a Mitsubishi Outlander Sport in as many years. This 2015 model easily withstood daily wear and tear over its 12 months and 16,623 miles with us.

Final fuel economy checks in at 26.7 miles per gallon from the 168 horsepower 2.4 liter I4. And our comment book has filled with similar sentiments as before: a forgiveness for the cheap interior and hard plastics, and an appreciation for the workhorse attitude and it’s no nonsense approach to driving.

Are there nicer crossovers out there for the money? Absolutely. But in a time when it seems everything is getting more and more complicated, there’s a lot to be said for the Mitsubishi Outlander Sport’s simplicity.