2014 marks the 50th anniversary of the porsche 911. and despite being a pentagenarian, the 911 is showing no signs of slowing down.  in fact, now that a turbo 991 has arrived it’s moving along quicker than ever. so come along as we hit our favorite road course, savannah’s roebling road raceway, to find out just how much faster and better this all-new 911 turbo really is!

While we are always pumped to drive a new Porsche, just as a race team begins thinking about their next race as soon as the checkered flag drops, we begin dreaming about the next Porsche we get to drive as soon as we hop out of one. So, no sooner did we pull our 911 C4S into pit lane at Roebling Road Raceway last year, we began thinking about this car, the 2014 Porsche 911 Turbo S.

The 911 Turbo and this 2-mile road course are made for each other. Unlike previous gens of Turbo, with the 991-series, both Turbo and Turbo S models are available right away, with the S adding more standard equipment and more power from the 3.8-liter twin-turbo flat-6.

Turbo numbers are 520-horsepower and 487 lb-ft. of torque. The Turbo S hikes those to 560 and 516, with up to 553 lb-ft. of torque available at full throttle, with overboost as part of the Sport Chrono package.

If there’s one constant in our society, no matter how much you give, people always seem to want more, and the new Turbo delivers. How much more? Well, the Turbo S is the quickest road going production Porsche ever. On Roebling’s front straight, we managed to hit 60 in 2.9-seconds, with the ¼-mile pass taking 10.8 at 129 miles-per-hour.

And as great as that is, the real reason you should want a Turbo is for the handling. It’s all-wheel-drive of course, and the current system is a evolution of the torque vectoring setup with an added Electro-hydraulic control for the multi-plate coupling that enables more power to be delivered to the front axle faster.

In addition, the Turbo gains rear wheel steer. With an electromechanical actuator for each back wheel, the system provides varying degrees of steering to both tighten turns and increase high speed stability.

But even with electronics managing just about every aspect of the chassis, the drive experience is about as intuitive and easy as it can be. Amazingly enough, Porsche has succeeded in not entirely dialing out all of the driving enjoyment. But if you’re looking for hairball, rear end out kicks, you might have to wait a few more months for the GT3. This car has phenomenal grip. The harder you push it through corners, the more it eggs you on.

Active roll compensation keeps things flat no matter the speed, and the stability and overall manner through high speed sweepers is incredible. Roebling also has a few tight corners and when coming off of them, depending on how much throttle you were able to maintain, you will experience some turbo lag going full off to full on.

We like big brakes and we cannot lie, the Turbo’s standard ceramic brakes are eye popping effective. As for transmission, the Turbo is PDK only, and while purists will surely cry for a manual, we’re beyond that. The PDK’s shifts are incredibly quick, and it makes street driving in every day traffic that much more livable. 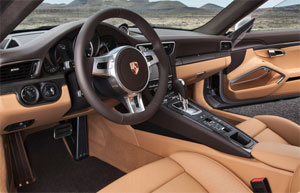 There’s plenty for the tactile senses to enjoy inside as well, from the 2-tone leather treatment throughout to the Turbo specific gauge package.

Government Fuel Economy Ratings are also improved to 17-City, 24-Highway, and 20-Combined. That also improves the Energy Impact Score to 16.5-barrels of oil and 7.4 tons of CO2 emitted annually.

As for pricing, does it really matter? While every red-blooded driver should want a Turbo, you either can afford one or you can’t. Sticker shock starts at $149,250; Turbo S at $181,950.

It is truly insane that Porsche has taken the rear engine platform to this level. The 2014 Porsche 911 Turbo simply exceeds all rational expectations. Can you have too much of a good thing? As far as we’re concerned, never. And you can be assured that Porsche engineers are already working on delivering even more for the next one. And yes, we are already thinking about driving it!