Ever since the Subaru WRX arrived for the 2002 model year, it’s taken on and conquered just about every part of the mild to wild automotive spectrum. Well this 2015 WRX sees its biggest change ever as Subaru breaks it away from the Impreza family car comfort zone. So let’s hit the track and find out if an Impreza-less WRX impresses us more or less.

To say the 2015 Subaru WRX has been highly anticipated is definitely an understatement. The SUBI and WREX faithful have been chomping at the bit ever since Subaru announced that this WRX would break free from the econo-themed Impreza, and go after a true sport sedan image.

But while no longer linked by name, the WRX hasn’t broken free entirely from the Impreza’s humble underpinnings. But, like any great work of art, automotive or otherwise, it’s not what you start with, but what you end up with that’s important. 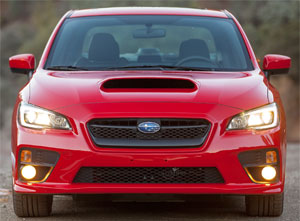 The WRX has always brought more to the table than its looks led you to believe. Sometimes we’ve been a fan of that appearance, and sometimes we haven’t.

Well for ’15, it’s visually a lot more aggressive; with a wide-body shape that promises serious performance. But we hope you want a sedan, since that’s it; no more hatchback.

It wouldn’t be a WRX without a big, functional scoop on the hood of course, but it’s actually slimmed down a bit. Sorry, boy racers. Hopefully, the new fender vents, carbon fiber-like fog light surrounds, 17-inch wheels, and deck lid spoiler will keep you happy. The new exhaust system has a little more bark, but you’ll still have to go aftermarket if waking the neighbors is your goal.

But, if having a ton of fun is your goal, no further upgrades are required, as this WRX is a legit track ready piece. Okay maybe we could use better brakes and seats, but other than that, as we found out through three days at Savannah’s Roebling Road Raceway, this sport sedan is just about perfect.

For no more power than it has, it really gets off corners in hurry, aided by a new Active Torque Vectoring system added to the Vehicle Dynamics Control that actually uses a tad of braking to reduce understeer. The much stiffer chassis helps to keep things flatter through the corners, and with the all-wheel-drive system, sport-tuned suspension, and 235/45 Dunlop Sport Maxx RTs there’s a bounty of grip through them as well.

The standard manual transmission is now a 6-speed and it works well. A new CVT is also available; and while it performs much better than in the Impreza, the manual would still be our choice.

After dropping it in 1st, revving it as high as you dare, and launching with a bit of clutch slip; we managed to hit 60 in 5.4-seconds. There was good grip; even on a cold track, and before we knew it we were at the end of the ¼-mile in 13.9-seconds at 100 miles-per-hour.

As for the interior of the new WRX; while it is nicely finished, things still look a bit bare bones. Though looks aren’t always what they seem, as standard features have increased significantly. A back-up camera, dash-top LCD info screen, and automatic climate controls are all standard.

There’s also a great new flat-bottom, leather-wrapped steering wheel; and the additional inch of wheelbase allows for more room inside, including almost 2-inches more leg room for your buddies in the back seat. Trunk space is also up a tad to 12.0 cubic-ft., with 60/40 folding seatbacks standard. 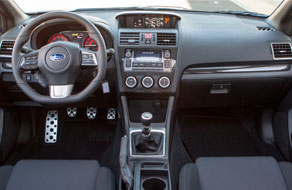 Back to the power. It’s the same FA20 2.0-liter, turbo, boxer-4 found in our long-term Forester XT, though it gets a little more bite; thanks to unique cams and valve springs spinning horsepower up to 268. Torque remains the same at 258 lb-ft.

We clearly enjoyed our time in this new WRX; and found it extremely refreshing to drive a simple, well-engineered, sporty car that under promises and over delivers. And it still delivers better Government Fuel Economy Ratings than before. 21-City, 28-Highway, and 24-Combined for our manual. The Energy Impact Score remains average at 13.7-barrels of oil use and 6.1 tons of CO2 emissions annually.

Best news of all? Base pricing starts at just $27,090. So it’s a lot of sport sedan for the money. And that’s why it won our Drivers’ Choice Award as our Best Sport Sedan.

Still fun, still affordable, and one sporty four-door that continues to win us over without reservations. It looks like separating the 2015 WRX from the Impreza was indeed a solid, smart move for Subaru.