It’s only been on the market for about a year, but the Subaru XV Crosstrek is already one of our favorite Subarus. And now there’s a gas-electric hybrid model to help spread the joy even farther on a tank of fuel. So, just how much more fuel efficient is Subaru’s first hybrid anyway? And do we love the XV more or less for it?

The 2014 Subaru XV Crosstrek Hybrid is the brand’s first hybrid. And we think this rugged little compact CUV is a great choice for entry into the gasoline/electric mix, as a big part of the appeal of the Crosstrek is its “just right” size.

If you don’t choose the hybrid-only Plasma Green Pearl paint, due diligence is required to spot the exterior differences, which are limited to just wheels, chrome door handles, LED tail lights, grille with active shutters, and of course Hybrid badging liberally applied.

Thanks to the battery’s location, there’s no compromise on interior passenger and cargo space. But, there is no spare tire. So, road side let downs are resolved with a fix-a-flat kit and a prayer. But then spare tires are almost a thing of the past anyway. 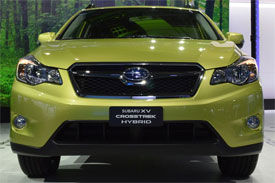 Complaints we have about the standard Crosstrek carry over. We hate the radio/nav. interface; and the interior, while it does seem durable, is very plain and Spartan giving the XV an economy car feel. But we do like that the hybrid power flow display is mounted up nice and high on the top of the dash instead of in the nav. screen. The gauges also work well, providing a lot of information in a very clear manner.

As for the internal combusting part of the powertrain, it’s the same 2.0-liter Boxer-4 you’ll find in the regular Crosstrek. But, combined with the electric motor, total horsepower and torque rise modestly to 160 and 163 respectively. Add in the typical stop/start system and all of the hybrid bases are covered.

Now you might not think you would really notice any differences in daily driving, as the slight power gains have potentially been offset by the additional 276-pound weight gain, but the Hybrid has a very different feel. Especially around town at slower speeds, where the engine seems much more responsive.

Off the line, you feel less lag and sense a more immediate uptick. However, the numbers didn’t bear out our feelings as a 0-60 time of 10.4 seconds is about a half second off what we got in the standard XV. The quarter mile speed was actually slightly faster, 80 in 17.9 seconds. 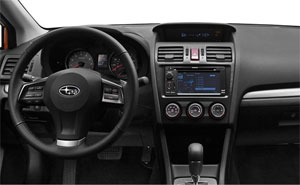 We found the electric boost quite noticeable going from light to heavy throttle, where you get an almost turbo-like quick kick. The Hybrid’s sportier feel is also noticeable through the slalom, as the suspension has been retuned and steering ratio quickened.

On road, the Crosstrek Hybrid is a solid citizen, with a ride that stiffer than the typical Subaru family truckster, but that plays to the rugged image. Ground clearance remains the same great 8.7-inches. So, combined with the “business as usual” standard all-wheel-drive system, and there’s no questioning the all-weather prowess of the Crosstrek Hybrid. Which we experienced firsthand, during some early drive time in Iceland.

As for the fuel efficiency, Government Fuel Economy Ratings are up to 29-City, 33-Highway, and 31-Combined…overall a 3 MPG jump over the regular XV. But, unlike most hybrids, we were easily able to beat the ratings without even trying, averaging 35.0 miles-per-gallon of Regular. The Energy Impact Score has also improved, now burning just 10.6-barrels and emitting 4.8-tons of CO2 annually.

Those gains might not be huge, but every little bit helps. And when you can do it in a vehicle that feels peppier than the original it’s a win-win. 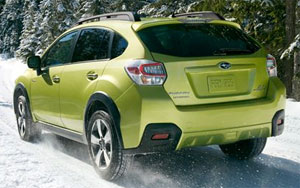 So while it still might be a tough sell to someone looking for Prius style MPGs; if you’re looking for a small all-wheel-drive wagon that delivers way more than class typical fuel economy and response, you won’t mind paying $26,810 for the Hybrid. That’s a modest $3,000 addition over the more sparsely equipped 2.0i XV Crosstrek Premium.

So, has our adoration of the Subaru XV Crosstrek grown or not? Well, that’s hard to say. But, it certainly hasn’t waned. It’s not a ground breaking hybrid and it doesn’t claim to be. We much prefer the under-promise and over-deliver approach as not only has it gotten more fuel efficient but it’s gotten livelier. And there’s always a market for a product that’s both greener and greater!