While the market for traditional, rugged, truck-like SUVs continues to dwindle, with most utilities either going crossover- like the Nissan Pathfinder-or disappearing altogether-like Toyota’s FJ Cruiser-options for trail blazing families are getting slimmer. But, Toyota is not giving up on the segment entirely, as there’s an updated 4Runner for 2014, ready to tackle both town and country. Let’s see if it truly is equipped to do both.

JOHN DAVIS: The line between traditional SUVs and crossovers is harder and harder to define. But, Toyota has drawn a clear line in the sand, or rather through their lineup; by promoting both traditional body-on-frame SUVS and unibody crossover options. For 2014, the 4Runner continues as a true SUV, but does gain updates that should appeal to buyers who are accustomed to the comfort and features of contemporary crossovers.

But, Toyota has also drawn a line through the 4Runner lineup to help give as many buyers as possible the exact experience that they are looking for. Besides the bread-and butter SR5 model, you can veer for more crossover-like comfort with the Limited, or utmost off-road ability with the Trail model. For our test we drew a posh Limited 4X4.

Like most recent Toyota updates, the powertrain is unchanged. Starting with a torque-y V6 that churns out 278 lb-ft. of the good stuff along with 270-horsepower. The transmission is a rather ancient 5-speed automatic; but you can get a real honest-to-goodness hi-low transfer case, and all 4Runners come with an integrated tow hitch and 5,000-lb tow rating. 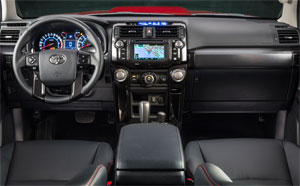 No matter how far afield you roam, it’s always nice to do so in comfort, and inside is where you’ll see the biggest changes to this updated 4Runner. Materials are much nicer, but it doesn’t quite reach the comfort level of a Highlander, as things like the very clunky layout remind you that this is still a truck. But truth be told, most buyers will actually love that.

The list of standard features grows. All models add Entune touch-screen audio, with only the base SR5 lacking navigation and back-up camera. A third row is an option for SR5 and Limited, but it’s not one we’d like riding in for any length of time. Plus, it clearly robs cargo space. Overall interior volume falls by 7.5 cubic-ft.

Exterior updates are much more subtle, mainly a chunkier front fascia, testosterone-injected grille, and new headlights. Limited models add a splash of chrome up front and further the headlight upgrade with projector beams. 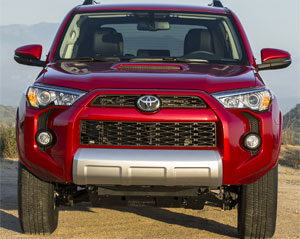 Spinning up those 20s at our test track, resulted in a 0-60 time of a reasonable 8.5–seconds; with a full ¼-mile pass taking 16.5–seconds at 86 miles-per-hour. And nowhere is it more obvious that this is still a truck, than at our cone course. Where, despite the Limited’s automatic adjusting shocks, nice, smooth arcs at a moderate pace are the keys to minimizing body roll and understeer. Braking performance is better however, with rock solid panic stops of 129-feet from 60.

And while driver feedback is truly truck-like; that’s a good thing when it comes time to get down and dirty. Hill-start assist is a 4Runner standard with Downhill Assist on all 4x4s.

Trail models gain most of the trick hardware with standard Crawl Control and available Kinetic Dynamic Suspension System with disconnecting stabilizer bars. But our Limited grade is still capable with a full-time, 3-mode 4X4 system with locking center differential.

4X4 Government Fuel Economy Ratings are 17-City, 21-Highway, and 18-Combined.  We averaged an okay 19.5 miles-per-gallon of Regular in mixed driving. Still, the Energy Impact Score is not a great one, at 18.3-barrels of oil consumed and 7.9 tons of CO2 emitted annually. 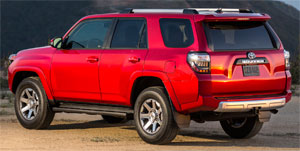 One reason automakers like crossovers is that by using a lot of car components they are generally cheaper to build than a true SUV. That’s why a base 4Runner stickers at $33,680; and the Limited starts at $42,225. The real deal always costs more.

After nearly 30 years of production, there is still a dedicated fan base that wants a genuine mid-size ute that is the 2014 Toyota 4Runner. But, we think their addition of a little refinement and technology might just add a few new converts as well, and allow the 4Runner to stay true to the SUV school for another generation.