The number one selling car name of all time is Toyota Corolla. Never one to wow with style and flash, the humble Corolla has soldiered on decade after decade providing comfort and reliability in an affordable if, to folks like us, a totally boring package. Well, that’s supposed to change with the new eleventh generation Corolla. It has a look we find fresh and appealing inside and out. But, will long time Corolla fans be impressed?

Few cars are likely to be around long enough to be redesigned eleven times. But then, no single car model has ever approached the 40 million sales of the Toyota Corolla. And, while 2014’s dynamic new styling direction may not be necessary for its continued success, we don’t think long term fans will object to driving a much better looking car.

As before, the front-wheel-drive Corolla is available in a more dynamic S trim, only now it looks like it was designed to be that way from the beginning. No tacky add-ons! 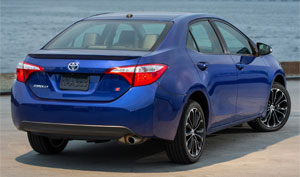 It wears by far the most aggressive face for a Corolla yet, and the cool LED headlights come standard, not just on the sportiest S model. Wheelbase is up 3.9-inches, as is overall length, to 183.1-inches for the Corolla S. It also sits wider and lower, and unlike many of today’s cars, the rear looks just as interesting as the front with sharp looking tail lights, the usual deck-lid spoiler, and rear fascia with diffuser. While 15-inch wheels are standard, 16-inchers adorn S models, and you can opt up to 17’s.

The Corolla’s 1.8-liter engine is carried over from last year, although it’s not that simple. In fact there are now two versions of the I4. L, LE, and S models come with a 132-horsepower version rated at 128 lb-ft. of torque. Oddly enough, LE Eco models actually deliver more horsepower at 140, thanks to a new Valvematic variable valve control and a higher compression ratio, but a tad less torque at 126 lb-ft. Transmissions vary from an old school 4-speed automatic, to rather nice 6-speed manual, and a new CVT with ECO and SPORT modes. It’s programmed with 7 simulated gears that in S trim are triggered with paddle shifters.

Up front, MacPherson struts feature L shaped lower arms, while a simple torsion beam handles suspension duties in the rear. Bumps are soaked up nicely, and better than before, and the Corolla handles just fine. But, as before, stops well short of being sporty.

Typical for the compact class, the electric power steering lacks feel, but it’s suitably precise. Drum brakes still occupy the rear axle on most models; you have to step up to 17-inch wheels and the S Plus or Premium packages to get rear disc. 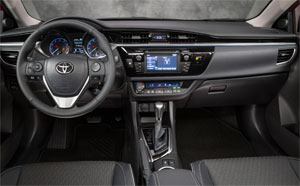 Interior features a theme that is a pleasant cross between RAV4 and Avalon, and overall it’s a nice place to spend some commute time. There are plenty of soft touch materials and a new 3-piece steering wheel design. Gauges vary with trim level, but look their best in the S model with a classic dual dial setup with a TFT info screen between. 8-airbags are standard, including a driver’s knee and a new passenger’s seat cushion airbag. A back-up camera is standard on all but the base L trim level.

Another place Toyota did not scrimp are the seats. They are plenty comfortable up front, and also in the rear where the extra wheelbase allows for over 5-inches more legroom. And yet there’s still plenty of trunk space; a very capable 13.0 cubic-ft.; even before you drop the standard folding rear seatbacks.

So, is a more dynamic looking Corolla a better Corolla? Yes, as far as our eyes are concerned. But, it’s more than just the pretty new face that makes this Corolla a winner. What hasn’t changed is the Corolla’s friendly commuter nature, and we expect, its highly reliable reputation. We think the Corolla faithful will be thrilled. Indeed, the 2014 Toyota Corolla is something old, something new, and something for Corolla fans to finally be excited about!